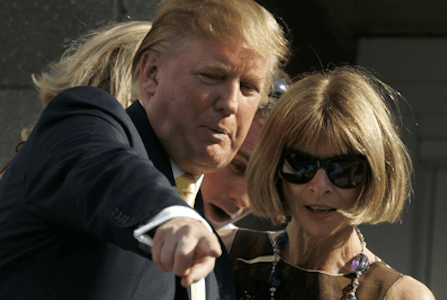 When you think of great female corporate leaders, you might not think of Anna Wintour. But you should. Wintour—a mother of two who serves as the artistic director of the Condé Nast empire in addition to overseeing many of its publications, including Vogue, Golf Digest, and Brides—is undoubtedly one of the most powerful women working in U.S. business today, not to mention the most powerful man or woman working in the fashion industry today. And although this co-overseer of more than one billion dollars in annual revenues might have more than a little in common with the version of her presented within the pages of The Devil Wears Prada (and the images of the film adaptation of the book), she's much more than a demanding and, at times, dismissive manager. But as for that infamous dismissiveness, when asked about it in a recent Times article concerning Condé Nast's new "focus on the bottom line and a relentless pursuit of web traffic," Wintour …

… stared stonily and asked whether The New York Times was a tabloid newspaper. “Come on,” she said. “I am decisive, you know. I don’t believe in wasting anybody’s time. I like to be honest. I like to be clear. In my own personal career, I have felt almost the most difficult thing to deal with is someone who doesn’t tell you what they are thinking.”

I also enjoyed Wintour's response to a question about "whether running a publishing company at a time of web-traffic targets and downsizing was less fun than in the prior era."

“I don’t like that word ‘fun’ because it sounds light,” she said. “It’s intriguing. It’s intellectually stimulating. It’s different. Why do people want to get stuck in the past?”

“If we sit back with our quills and the visors on and, you know, the old kind of printing presses that I used to see with my dad,” she said, referring to her father, Charles, who edited The London Evening Standard, “what is the point of thinking that way? Come on.”

And here she is telling her detractors to grow a pair when asked if "there was an element of sexism in the way she is viewed."

“ … I decided long ago that I can’t let any of that bother me,” she said. “If my style is too direct for some, maybe they should toughen up a bit.”

Another working woman with a lot to say is Maureen Sherry, an ex-Bear Stearns managing director who just published a supposedly funny and revealing novel about life on Wall Street, from a female point of view. Opening Belle, according to reviews of the book and interviews with the author, is highly autobiographical and includes some of the unsavory things that typical Wall Street men supposedly do and say to women they work with (if you caught Sherry's op-ed last week, you know that two of these things are 1) "moo" at women holding breast pumps, and 2) drink women's breast milk on dares).

Although you can't judge a book by its cover, you can make some assumptions. And one you can make from the cover of Belle is that Sherry isn't aiming for high literature but somewhere just north of chick lit. And so, a discussion of the literary merits of her book might not be as important as a discussion of whether readers will be able to sympathize with a main character who's very much a part of the 1 percent. That is, Isabelle, the central heroine of Belle, makes a few million a year as a trader. Not unlike Sherry did once upon a time. Although now Sherry no longer works on Wall Street, she still summers in the Hamptons, owns a fancy NYC apartment, and is married to a private equity investor. In any case, here's the Times on the aforementioned discussion topic (that no doubt several book clubs will be taking on this winter):

The novel’s dueling themes divide the mass-market publishing world. Some observers say readers might embrace it as a lighthearted but inspiring empowerment parable. “I think it can work,” said Louisa Ermelino, the reviews director at Publishers Weekly, who has not read the work but knows its gist. “Even though she is rich and powerful, she’s still a woman up against men in suits on Wall Street.”

For other students of the genre, though, it’s a step too far in favor of the 1 percent. “I would expect a novel set in the mortgage crisis to look at the precarious situations of more ordinary working women,” said Suzanne Ferriss, an English professor at Nova Southeastern University in Fort Lauderdale, Fla., and a co-editor of “Chick Lit: The New Woman’s Fiction.”

“There was a backlash against ‘Primates of Park Avenue,’ ” Ms. Ferriss noted, referring to a tongue-in-cheek memoir by Wednesday Martin about trying to fit in on the Upper East Side. “That suggests to me that in the current climate, this might not have many followers.”

If I were a betting man or woman, and judging from the first few pages of Opening Belle, I would long the latter. However, Hollywood has apparently bet on the former; already, Reese Witherspoon is attached to the film adaptation of Belle.

If you're curious about which presidential candidate(s) Goldman Sachs is throwing its money behind, Bloomberg gives you all the juicy detail$. On the Republican side, Goldman's currently betting on Rubio (who, despite a third-place finish, made a strong showing in Iowa).

Goldman Sachs Group Inc. employees gave $107,000 to Marco Rubio’s presidential campaign in the final three months of the year, a 50 percent jump from the previous two quarters, as support for Jeb Bush faded.

The contributions mark a shift at the investment bank, where employees gave a combined $773,000 to Bush’s campaign committee, leadership PAC and the super-PAC backing him since the opening months of the campaign. In the fourth quarter, Bush only got two contributions from Goldman Sachs donors, totaling $2,950.

Meanwhile, on the Democratic side, in no surprise if you've been watching the debates, Hillary's beating Bernie for Goldman dollars.

However, it looks like, with respect to the general election, Goldman's staff won't be supporting Hillary's team this time around.

When Clinton first sought the White House in 2008, Goldman Sachs tilted heavily to Democrats, who received 74 percent of the firm’s contributions. Since then, Republicans have been the biggest recipients. So far in 2016, 61 percent of its giving has gone to Republicans.