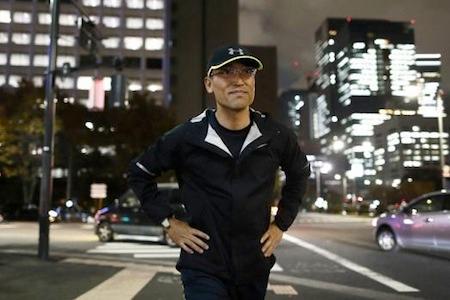 It makes pretty good sense to me that a healthier worker is a more productive worker. Fewer sick days, fewer cigarette breaks, fewer chocolate donut breaks, more effective when not on break, etc. It also makes good sense to me that if you nearly die from working too much and/or hitting the fatty tuna and Sapporo too hard that you should alter the amount you work, amount you eat and drink, and amount of time you spend on physical exercise.

I mention all this because two months ago Japanese bank Daiwa Securities named one of its employees who nearly died from working too hard its new CHO, that is, its new Chief Health Officer. It also just announced a new plan for the holiday season where bankers get the chance to earn more money if they eat less, drink less, and walk more.

Japan’s second-biggest brokerage is encouraging its 13,600 domestic employees to eat and drink moderately for 30 days from Dec. 14. While most Japanese don’t celebrate Christmas, a period of year-end and new-year parties is in full swing nonetheless.

The move is part of a drive to improve the health and fitness of staff, especially older workers, to boost productivity and keep them from burnout. The Tokyo-based firm in October appointed a chief health officer -- a former investment banker who had collapsed and nearly died of overwork until he started on a fitness path eight years ago -- to oversee programs that give incentives for employees to exercise and leave work on time.

“I worked hard at the cost of my health,” said Toshihiro Matsui, 53, who had spent two months in the hospital and four months on sick leave before he returned to work with a new dedication he now wants his colleagues to adopt. “Being in healthy shape is the best thing for an individual, and it also leads to more productivity for a company.”

It should be pointed out that Daiwa has a rather clear (and mathematical) path to increased fitness and productivity. And one that’s apparently steeped in tradition.

Daiwa’s holiday season initiative is called the “80 Percent Program” because it urges workers to stop eating once they feel that percentage full. Participants are asked to monitor their eating of breakfast, lunch and dinner and mark a circle or a cross on a self-evaluation form, indicating whether they managed to keep within the 80 percent rule.

The practice has been used for generations in Japan, where there is a saying that following it will keep the doctor away.

Daiwa’s program also gives 10 hints for eating well, such as chewing properly, getting enough vitamin B, keeping tempting snacks out of sight and checking one’s weight at least every three days. Workers who are over 45 and successfully complete the 30-day course earn points that can potentially count toward salary increases once they reach their 50s and 60s.

Other programs at Daiwa also allow older workers to accumulate points. Under one initiative that started in November, employees are encouraged to walk at least 920,000 steps over three months, or 10,000 steps a day, using a smartphone application called Qupio.

Speaking of steps, CHO Matsui himself is quite the stepper. After nearly dying on the job (he used to regularly work past midnight until he went to the hospital for fatigue and while there lost consciousness), he now jogs around Tokyo’s Imperial Palace at a nice clip (8-minute miles), is training for a marathon (with colleagues), and is every Daiwa banker’s best friend. At least, every junior Daiwa banker’s best friend. I doubt many MDs are too pleased with one of his duties as CHO: “ensur[ing] staff including investment bankers and retail brokers leave the office by 7 p.m.”

Which leads me to this question: Can you imagine one of the big U.S.-based bulge bracket banks like Morgan Stanley, J.P. Morgan, or Goldman Sachs—which not long ago enacted the now-famous Protected Saturday rule for young bankers, followed by its very nice no-working-past-midnight rule for interns—employing someone to make sure that every last banker is out the door by 7?

In any event, I loudly applaud Daiwa’s move, as well as CHO Matsui’s Rocky-like comeback.