Six Tips for Bringing Common Courtesy Back to the Office 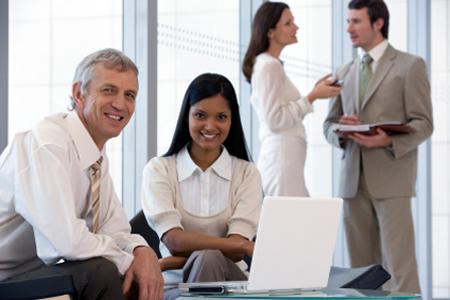 I arrived at the office with visions of M&Ms, Snickers, and Kit Kat bars dancing in my head. My boss had left a bunch of these chocolates in a pumpkin on a shelf in celebration of Halloween. I skipped breakfast and was counting on these empty calories to satisfy my hunger before lunch. But when I tipped the pumpkin over, I was frightened by a horror of horrors fitting for the holiday – Skittles, Laffy Taffy… gulp… hard candies — where had all the chocolate gone?! My co-workers took every last one. In the immortal words of Stephanie Tanner — how rude!

All kidding aside, we often speak about office romances and how they have become more common as co-workers spend more time with one another. What we fail to recognize is that when co-workers become too comfortable with one another, the simple common courtesies seem to go right out the window. And when we stop being civil with one another, we slowly allow the workplace to get a little more unprofessional. The following are small, albeit important, tips for bringing common courtesy back to the office:

1. Say Hello – The simple act of saying hello to a co-worker when you walk past them in the hall, on the street, or in the elevator is more important than you think. People just like to be acknowledged, and when you go out of your way to ignore them, it sends a message. Even if you have already greeted each other earlier in the day, it takes one second to say “Hey” or nod at each other as a sign of respect.

2. Respond to Emails – We are all busy, but when co-workers are working on a project together, and one sends an email related to that collaboration, a simple response of “Got it… Thanks” can put a colleague’s mind at ease, especially when a deadline is involved. When there is no response, the co-worker may be unsure that the email was received and may become worried that the project will not get completed on time. Just hit “Reply,” especially if the co-worker specifically asks for a response.

3. Avoid Gossip and Office Politics – No matter how friendly staff may get with one another in the office, they must still remember that they are in a place of business and should be professional. There is no place for the kind of high-school behavior of belittling someone’s appearance, attitude, or beliefs, among other identifying traits, just to have a good laugh and feel superior to them. In addition to the possibility of hurting someone’s feelings and making them feel insignificant should they hear the gossip, you could also hurt your own reputation in the process.

4. Be Helpful – If an opportunity arises to help a co-worker, offer your assistance. Not only are you building relationships with co-workers, but you may also improve your skill set and value to the team if you take on new tasks and responsibilities while coming to the aid of a colleague. Moreover, as the saying goes, “Courtesy is contagious,” and if everyone in the office follows your example, the office culture as a whole will improve.

5. Clean Up After Yourself – If you make coffee, clean up the ring around the mug that may be left on the counter. If you’re cleaning dishes, don’t leave errant pieces of meat in the sink. Believe me, if you’re a slob in the office, it will become your reputation. “He does a good job, but his food exploded in the microwave, and he didn’t even bother to clean it up. And it smelled. Gross.” Won’t take long before “Gross” actually becomes your nickname… So clean up after yourself.

6. Be a Good Neighbor – You may have some downtime in your day, but you should respect your neighbors in the office and keep the noise to a minimum, so they can complete their tasks. Use earbuds when listening to music, take personal calls away from your cubicle, hold meetings in a conference room, and try to speak with your inside voice when having discussions with other colleagues.

It’s hard to be completely professional at all times, but if you make it a habit to follow these simple tips, you will be well on your way to being a courteous colleague.

6 “Negative” Actions That Might Be Good for Your Career

As employees at any company, we are often reminded of what employers are looking for from their staff, but in a practical setting, companies may not have a real clue about what is good or bad in the workplace. We recently discussed the positive traits many of us possess that can actually be detrimental to your career, but there are also actions employees take every day that supervisors would frown upon, but may actually help employees advance their career.

We spend a majority of our lives in the workplace, working side-by-side with co-workers we often see more than our friends, doing tasks for superiors we see more than our parents. It stands to reason that we want to make a good impression on those we come into contact with so often.

Wash Your Hands and Other Great Workplace Tips

Your resume says a lot about your work experience, but it doesn’t tell employers anything about the nasty personal habits you may have that alienate you from the rest of the office. And while it sounds harsh, the reality of the situation is, what your co-workers think of your personal flaws can be just as detrimental to your career as a poor work ethic, especially when these co-workers could turn into potential references.