Is Creativity the Key to Workplace Happiness? 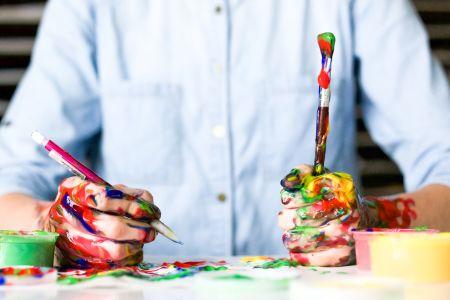 Want to be happy at work? It turns out that having a feeling of being in control of your destiny may be the key to the whole thing. And, as such, those who work in professions such as finance and accounting are less likely to be happy than their colleagues in sales, marketing or creative fields.

As Paul McDonald, a senior executive at staffing specialists Robert Half, explains in the video below (which comes to us courtesy of the Wall Street Journal), a recent Robert Half study of some 12,000 employees found that around 71% current employees said they were happy at work.

While that may sound like a decent percentage, it's worth pointing out it means almost 3 in 10 workers are not happy—with the aforementioned finance and accounting personnel less likely to be satisfied than anyone else. Part of the reason for that, according to McDonald: folks in those professions are much less likely to have creative control over their work than colleagues elsewhere in the business. Accordingly, those with positions that have a high degree of creativity "feel more invested" in their work and the companies they work for.

Of course, your field or function isn't the only factor that affects your level of workplace satisfaction: the survey also found that the size of your business, your age, and your level of seniority can all help to predict how happy you are at work.

At the top of the tree: those in the C-suite, who, not coincidentally are generally the people with the most control over the direction of the company—something that also explains why those who work at smaller firms tend to be happier than those experiencing the daily cog-in-a-machine feeling of life at a corporate behemoth.

Given the above, it's probably not too surprising that members of the Boomer generation tend to be a little happier than average too. Not only is retirement an option for many (meaning that they're choosing to continue working), but their experience tends to translate to seniority.

More surprisingly, Millennials are also pretty satisfied with their jobs—at least, more satisfied than Gen-X-era employees, a fact that McDonald suggests is partially due to Millennials' expectations that their jobs will challenge them. Take that trait away from the Xers, and add in the feeling of being sandwiched between a group that isn't handing over control and one that seems to be getting all of the attention, and you've got a recipe for a group that feels like it isn't being appreciated.

If there's a takeaway for your career in all of this, it's that the research underlines the importance of doing your research before accepting a position: if you're looking for a career that will be genuinely fulfilling, you should spend time considering the size and structure of the firm you're looking at, and find out as much as you can about reporting arrangements, hierarchy, and the ability to drive your own career as you can while interviewing.

(Bonus tip: if you're hoping to break into management, you can also use this research when thinking about how to structure your teams/departments—people like having clear goals and a sense of direction, as well as being part of a unit that is small enough that they feel that they can be recognized for their specific contributions.)

How to Optimize the Start of Your Day

The first thing many of us do in the morning is reach for our phones—hit snooze, catch up on social media, or start tackling the ever-multiplying emails in our inbox. But what if there was another way to start the morning in order to optimize the natural energy we awake with but often ignore (thanks to coffee)?

Thankfully, according to science, there is.

How to Handle Workplace Conflict

We spend much of our adult lives in the workplace, interacting with individuals we may never have chosen to interact with otherwise on a daily basis. It is inevitable that, at some point, there is going to be a clash of egos in the workplace.

5 Ways to Optimize Your Office for Productivity

Whether you work from home, an open plan office, or a cubicle, it’s important to pay attention to how your surroundings are affecting your state of mind and consequently, your productivity.

Research shows that work environment can have a huge impact on productivity, and everything from the temperature of the office to the levels of background noise can help or hinder ability to concentrate on the task at hand.