This coming Monday, on Tax Day—which is either your least favorite day of the year or your favorite, depending upon how many deductions you take, how many dependents you have, and which tax bracket you fall into—Vault will be releasing its annual ranking of the top accounting firms in North America. We’ll be unveiling which firms topped the latest Vault Accounting 50 (a ranking of the “best accounting employers to work for”), which firms topped the Vault Prestige Rankings (“the most prestigious firms”), and which firms outranked all others in various “quality of life” categories such as compensation, work/life balance, hours, training, business outlook, and promotion policies, among others. So, in just a few days, we'll reveal if Ernst & Young held on to its No. 1 ranking in the Vault Accounting 50, or if other members of the Big 4 (PwC, Deloitte, or the recently-shamed-in-scandal KPMG) or firms just outside the Big 4 such as Grant Thornton and BDO USA have risen to the top.

But before we get into all that unveiling (and taxpaying or tax returning), I’d like to point out some interesting aggregate findings we came across when compiling our rankings. Note that all findings—as well as the forthcoming rankings—are based on results of the annual Vault Accounting Survey, which was administered earlier this year to nearly 8,000 accounting professionals across 85 firms. The survey, along with asking professionals to rate their competitor firms in terms of prestige, asks accountants to evaluate their firms in various workplace areas on a scale of 1 to 10, with 10 being the highest and 1 being the lowest.

And with resect to these workplace categories, below you’ll see two color-coded tables. The first includes the average ratings that women at various levels of experience gave to their firms in a variety of workplace categories; the second includes the same data for male respondents. And you’ll see that the ratings are highlighted with a certain color if that rating was the highest, lowest, second highest, or second lowest across accountants’ careers. 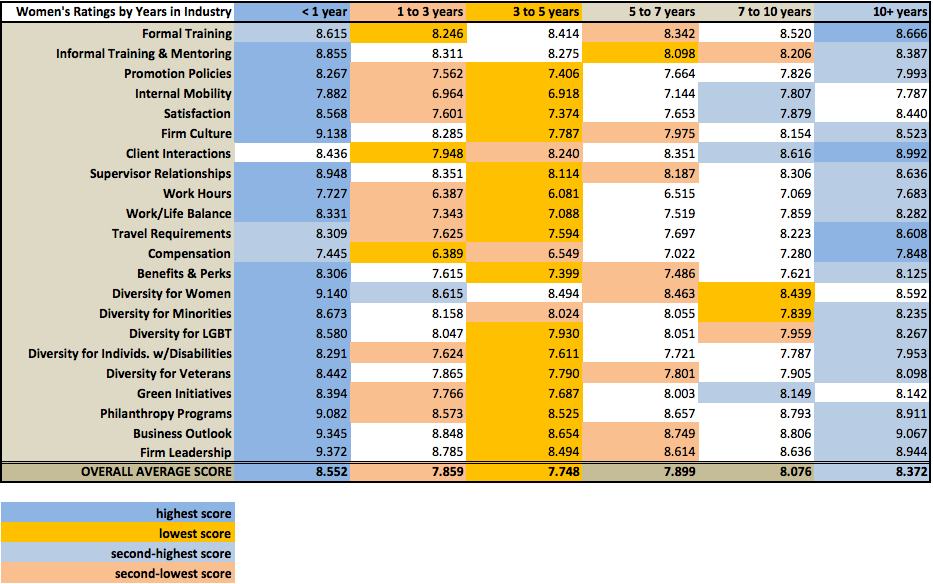 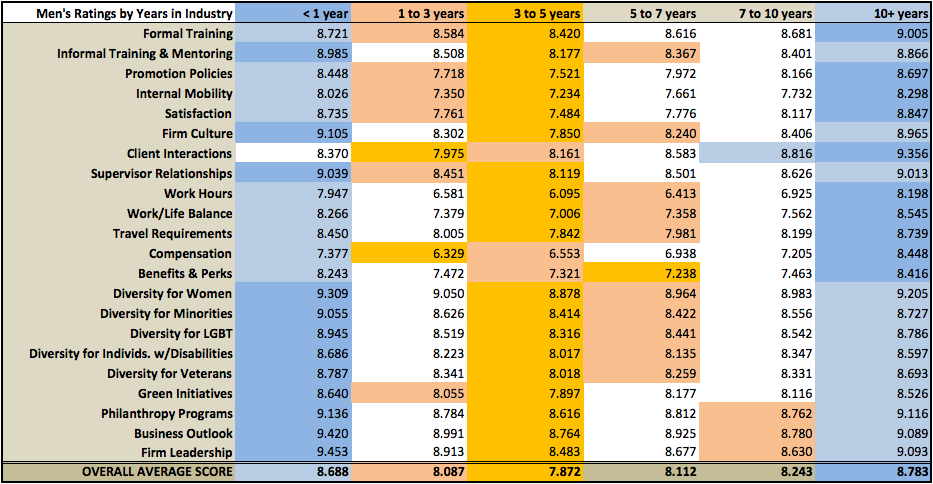 Of course, what you see above is a glaringly obvious trend that holds in both tables, which is to say one that holds for both female and male accountants. And this trend holds in most workplace categories. Basically, it appears that both women and men who work in the accounting industry are highly pleased with their jobs at the outset of the careers as well as very late in their careers. However, there’s a huge dip in their satisfaction in early to mid-career—specifically, at the three-to-five year mark, which is typically when those working in audit become senior auditors, and those working in tax become tax seniors.

As for what could be causing this dip, my thoughts are these: It’s likely that first-year accounting employees begin their initial jobs out of college with a lot of hope and promise and are pretty darn pleased that they’re getting paid some quality cash to work in a professional setting with smart colleagues and sharp managers, not to mention that they're getting to work on accounts involving giant, household-name clients. Soon, though, like a piece of sugar-loaded chewing gum, all this loses its flavor, as newbies become experienced professionals, meaning they get a couple of tax seasons in them and realize that life in a professional setting, even when you’re taking home a good amount of dough, is not all that their cheerful colleagues in HR cracked it up to be when they handed over that crisp offer sheet with a bunch of zeros to the left of the decimal. However, despite the thankless overtime and busy seasons that seem to never end, seniors keep cranking out those long hours, fighting for those promotions, navigating the tough cultures, the tough managers, all in hopes of becoming a big swinger—that is, a partner. And if they can stick it out long enough and make to that highly desired destination, they'll find that the long hours at work lessen, while the hours on the golf course and at home increase, and of course they start taking home salaries that are not just nice looking but dashingly handsome.

In any case, although the overall trends are similar with respect to women and men, it’s important to point out that across the board, in every single workplace category, at more than 10 years of experience, men give their firms much higher ratings than women (at less than one year of experience, scores are pretty similar between men and women). And it’s perhaps no surprise that three of the four categories with the most disparity between the genders are: promotion policies (men with 10+ years of experience rate their firms' promotion policies 0.704 higher than women with similar experience), diversity with respect to women (0.613 higher), and compensation (0.600 higher).

Read More:
Can Sheryl Sandberg Break Up the Old Boys' Club?
Accounting Is Least Romantic Industry, According to Survey
The Dark Side of Accounting
How Gay-Friendly Are the Big 4 Accounting Firms?
Which Big 4 Firm is Most Prestigious?

How to Identify a Healthy Workplace During Your Job Search

Workplace Mental Health and Well-Being Advice from the Surgeon General

The workplace is constantly evolving, and one of the most important workplace developments in recent years involves employee mental health and well-being. Last month, adding to the discussion, the U.S.