I Should be Studying More: I'm Taking Another Bar Exam, Episode 3 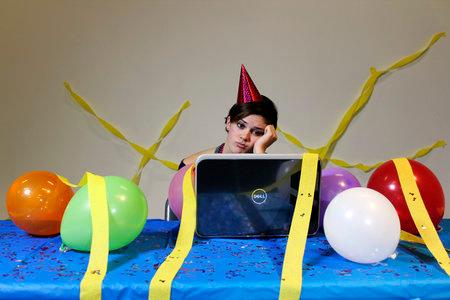 The New York Bar Exam is officially less than a month away. Do I feel prepared? The answer is, obviously, no. I definitely could be studying more, but I could also be studying WAY less.

A surprising challenge that I’m facing is finding a place to study. I can make flashcards with music playing or background noise, but I need complete silence to take practice tests or fully concentrate on reviewing my notes. That means my apartment is out for most of my studying. First, I don’t have a desk in my room anymore, and second, my roommate who owns a record label (I live in Brooklyn), is constantly playing music and having aggressive Skype calls with his artists. We live in a loft with hardwood floors and 16 ft ceilings, which were originally selling points, but now I’m realizing that there is nothing to absorb the sound in our cavernous apartment, so even if music is playing softly or he is speaking at a reasonable level, I can hear everything echoing through the walls. I was oblivious to this noise issue until I actually started spending time at my apartment after work.

Most coffee shops and public libraries close around 8:00 or 9:00, but I’ve found the holy grail of late night silent study for working adults—the Midtown Manhattan Library on 40th and 5th. This library should not be confused with the Bryant Park Library a few blocks away. Unlike the Bryant Park Library, the Midtown Manhattan Library does not have chandeliers, murals on the ceilings or rich mahogany desks, it is utilitarian, lit by fluorescent lights and, most importantly, open until 11 pm. I’ve been happily hauling my books, computer, lunch, dinner and snacks from Bushwick to Midtown West and setting up shop at the library after work. I even have a study buddy who I met through quite possibly the most boring Meetup group of all time—people working full-time and studying for the February New York Bar Exam.

Even with a quiet spot to study, I still can’t commit to constantly studying. While I do spend at least part of each day cramming New York distinctions into my brain, I should probably be doing more of it. For example, like many businesses, Vault was closed yesterday for the winter version of fire and brimstone that was supposed to pour down from the sky. Did I take advantage from this gift from the snow gods and spend a solid 8 hours of the day studying? Of course not. I slept until noon and then hung out in an East Village coffee shop drinking hot chocolate and eating nachos. Sure, I did some studying later, but I probably would’ve gotten more done had I gone to work and then gone to the library.

It has been a struggle to eschew my lifestyle of being a (relatively) young, unattached professional living in New York City. It was easy to say no to friends who wanted to hang out when I studied for my first bar; after all, I had been blowing them off for three years to study during law school. Now that I’ve had a sweet taste of freedom, rejecting bottomless mimosa brunch invitations and staying in on a Thursday night when my friend’s band is playing has gotten a little more difficult. I’m fortunate that I don’t have a family to care for or that relies on me for income, but I’d still rather be doing anything else other than studying with my free time.

Now that February is bearing down on me, it’s probably time to just deactivate my phone.

Was that phone booth I stepped into for that “hilarious” Instagram photo really a time machine (life doesn’t seem particularly excellent right now) or is it just déjà vu? That old familiar bar exam feeling is back.

I’ve been studying for my second bar exam for about two weeks, I had to let my black market Barbri books mock me from the corner of my room for about a month before actually opening them to study, and I have to say, it feels like the summer of 2012 all over again—physically, mentally and emotionally.

Physically, just as before when during my summer of discontent I managed to overflow a shoebox with flashcards that I spent hours meticulously penning, my hand is killing me. I’ve already made about 200 flashcards and have about 76,815,972,349 more to go, and the bar exam writer’s cramp is in full effect. Also like when studying for the Virginia bar exam, studying for the New York bar exam has led me to inhale everything in sight, and, obviously, exercising is out of the question. So, on February 25, I won’t be able to blame my fat face on the mumps like I could last week (I possibly contracted the mumps last week because its 1945), I will have nothing to blame but my own poor health choices.

Mentally, all the rules and exceptions are at least recognizable. This is the third time I’ve had to learn a lot of this information—first in law school, then for the Virginia bar exam, and now for New York—and it’s all just kind of bumping around in my brain. Even the sample MBE problems seem familiar. Unlike the hand dystonia and weight gain, I’m glad this bar exam feeling is back. Feeling comfortable with many of the bar exam concepts and even recalling some of the legal rules verbatim is easing the constant feeling that the bar exam is looming over me waiting for its moment to strike brought on by the mental frustration of reading the Barbri “model” answers.

Emotionally, I’ll admit, that just like when studying for my first bar exam, I am overwhelmed. Feeling comfortable with legal concepts is one thing, but spitting out the correct, precise rule and crafting a coherent essay in 40 minutes is quite another. The prospect of more or less memorizing 14 subjects (hence the one billion flashcards) and working a day job is daunting. While I’m certainly not as despondent as I felt the first time, I’m not exactly elated either.

How is everyone else’s studying going?

Now that I’ve survived my first year living in New York City, and don’t plan on moving in the foreseeable future, I’ve decided that it’s probably time to take the New York bar exam. Even as a non-practicing attorney, I feel like I should be licensed in the state in which I'm living.

The Cold Truth about the Bar Exam

It’s the final countdown—the bar exam is one week away. Despite reassurances from your mom that you’re “definitely going to pass,” the truth is…you might not.

Well, we’re here. The bar exam classes have ended, and you now have two weeks to insert the laws of an entire state into your tired, tired brain.

As we meet mid-April, law students either find themselves in exam week lockdown or feverishly outlining while pretending to do their reading for their last few classes before exam week and solitary confinement officially begin. In my experience, there were three types of law students: (1) Over-prepared; (2) Do not GAF and (3) Just need one more day to study.