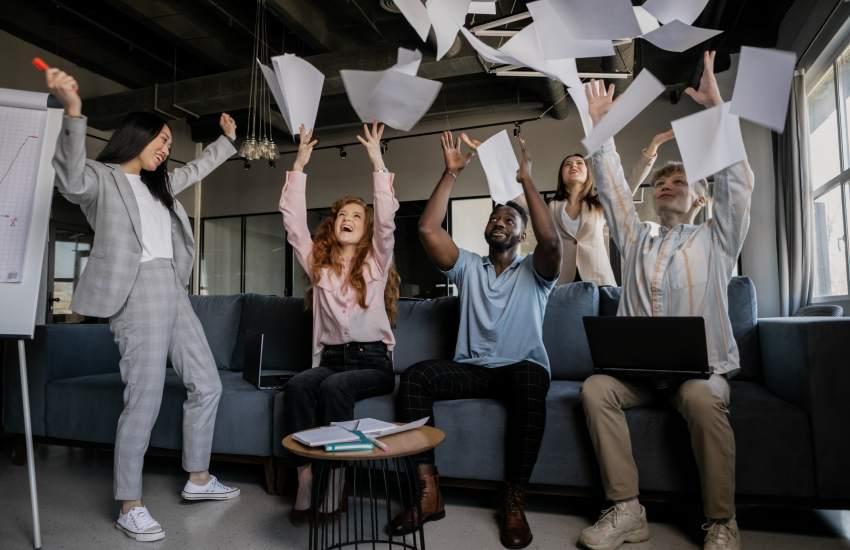 Got a case of the end-of-summer blues? Does your work week feel never-ending? Well then, today we’ve got just the thing to put some spring back into your step. Last June we began providing coverage on 4 Day Week Global’s six-month UK trial of the four-day work week and this month we have officially hit the halfway point, which means we’ve got some sweet updates-just for you!

For those who aren’t familiar with 4 Day Week Global, it is a non-profit organization that has recently partnered up with think tank Autonomy and researchers at Boston College, Cambridge University, and Oxford University in order to collect data from a six-month long trial of more than 3,000 employees at 70 companies in the UK who are participating in a four-day work week. The trial began on June 7, 2022, and aims to examine several key areas including employee stress levels, potential for burnout, job satisfaction, sleep patterns, energy use, and overall health.

4 Day Week Global has also announced a North American trial that is slated to begin this October. 60 companies and more than 4,000 employees across the U.S. and Canada have signed up to participate in the six-month trial. Both the UK and North American trials encompass a variety of industries including retail, construction, technology, marketing, design, finance, non-profit organizations, and more. Participants will receive 100% of their normal salary, while working 80% of the time, under the promise of maintaining their productivity.

Ah yes, but what about those updates? Since the trial has reached its halfway point, 4 Day Week Global did a little check-in with the participating companies in the form of a survey. The survey consisted of a series of questions that were answered on a scale of 1 to 5 and according to 4 Day Week Global, nearly 60% of participants responded.

It’s important to keep in mind that the following points of data relate to the number of participants who responded to the survey, and they don’t reflect the entirety of the trial participants. Now then, let’s get into the data, shall we?

What does all of this mean for you? For starters, the UK trial has been so successful and gained so much attention, that 4 Day Week Global is going full steam ahead with their North American trial, which is sure to be equally as huge. Eventually, companies will have to realize that if they wish to boost employee engagement and retention, and perhaps even increase their productivity, they’ll simply have to adapt in one way or another.

The way we think about the work week is indeed evolving at a rapid pace, and so the potential for your work week experience to change in a positive way is growing. If I may make a prediction, I’d wager that in the near future we will see a majority of employers embracing the four-day work week, or some other form of what we now refer to as non-traditional work week paradigms. If this becomes the case, the five-day, 40+ hour a week shuffle will fade into obscurity, and will be seen as being antiquated and unnecessary.

Lastly, here’s some fun stuff. You may have heard of Tom Brady, right? He’s that quarterback guy, and even he says he wants one extra day off per week. If you think I’m kidding, here are Mr. Brady’s own words-and I quote (always wanted to say that) “The fact that I’ve worked weekends for the last 23 years...I do deserve one day off a week.” So, I say this to you: if Tom Brady can get an extra day off, so can we.

We will be providing regular updates on both the UK trial and the North American trial as they become available, so keep your browser locked in here. If you want to learn more about 4 Day Week Global, you can visit their official website here.

The four-day workweek is one of several ways in which companies are attempting to provide a better quality of life for their employees as a response to workplace challenges associated with the Covid-19 pandemic, as well as the effects of the Great Resignation. Earlier this summer, we spoke at length about the four-day workweek, its benefits, and the non-profit organization, 4 Day Week Global.

Welcome back to our list of the best employer perks of 2022. These perks are perfect for increasing your productivity, relieving financial burden, and improving your overall quality of life.

The year is 2022. We don’t have flying cars or decent hoverboards to shred on, we aren’t instantly teleporting to exotic locales, we’re not part of some larger intergalactic counsel, and I’m still collecting physical media – what gives?