The Best Recommendation Letter Ever 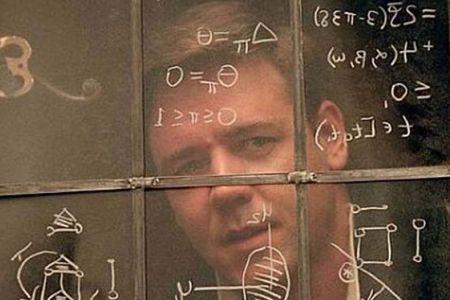 John Nash was a Nobel prize-winning mathematician whose life was made all the more memorable through its portrayal in the movie A Beautiful Mind.

Following the death of Nash and his wife, Alice, in a car crash last month, Princeton University has lifted the restriction on Nash's graduate school files. Amidst the files are plenty of examples of what the school describes as "the more mundane aspects of Nash's life"--items that it suggests may help the mere mortals among us to connect to Nash as a human, with human struggles. Or as the school puts it: "Those who do not relate to a strong aptitude for mathematics or winning the Nobel Prize may still find they have something in common with Nash."

One item that definitely won't help most of us to do so: Nash's letter of recommendation from a teacher at his undergraduate alma mater, the Carnegie Institute of Technology*. I'd quote from it, but it's so brief and to the point that you may as well read the whole thing yourself: 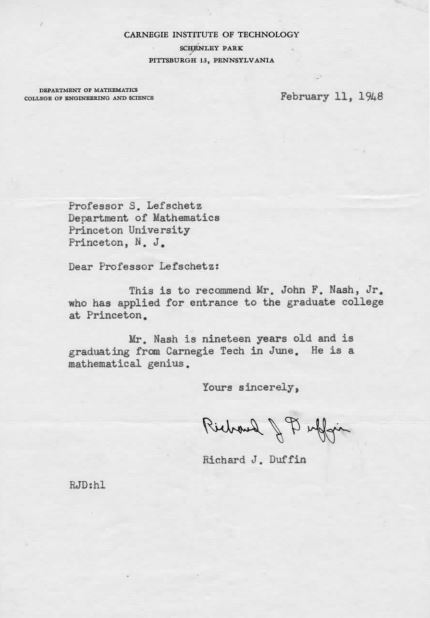 I'm not sure I can imagine a better letter of recommendation for anything--and not a "detail-oriented," "proven track record" or evidence of community service trips to the 3rd world in sight.

Indeed, in another letter from the file, a fellow recommender went to some pains to point out that Nash was not  the finished article, noting that "He might appear inferior, since he does not write out his work in polished form, nor does he lecture impressively. However, this external clumsiness is more than compensated by quickness of understanding, originality, and capacity for seeing the inner meaning of an argument, all unrivalled in my experience."

Read the full file--including Nash's undergraduate theory (which is frankly beyond me)--here.

*Fun fact: in 1967, the institute, named after its founder, the legendary industrialist-philanthroper Andrew Carnegie, merged with another higher education institution that had been founded by wealthy financiers--Andrew and Richard Mellon--to create Carnegie Mellon University.

How to Build a Social Resume

Traditional resumes will always be a critical part of the recruiting process, but they’re not the only things hiring managers look at anymore—not even close. Thanks to our increasing participation in various social media sites, hiring managers can now quickly find a wealth of information about job candidates simply by typing their names into Google.

Does Your Resume Have a Perfect Sales Pitch?

No matter your field, there's plenty of selling in the job search, with prospective employers as buyers for the products, which are the applicants themselves. As a result, sales skills matter, and they get a lot of attention.

The following has been adapted from the Vault Career Guide to the Internet and Social Media.

Your resume and cover letter are your primary marketing tools to help you get hired.