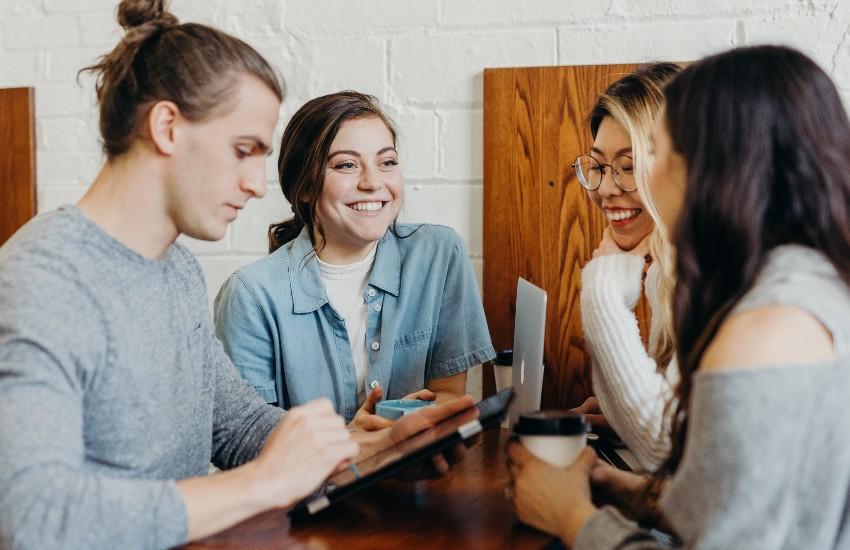 When you think of networking, you might envision a room full of people who don’t know each other, making small talk, sipping cocktails, exchanging business cards, hoping to eventually making long-lasting connections. But networking can be much more than that. While networking can occur externally (connecting with people outside your company), it can also take place internally (with those inside your company). In both cases, your goal is to make strong connections with people who'd be happy to chat with you and help you.

As for internal networking, it can occur with colleagues you work with on a daily basis, or those you rarely to never work with. You might only see someone once a week, month, or year, but it’s still important to have some type of relationship with them. In fact, it's important to have some type of a relationship with as many people inside your organization as possible.

Below, you'll find the main reasons why internal networking is so important, followed by  specific tips for successful internal networking. Note that this is not a sales playbook but a guide to forging meaningful, mutually beneficial relationships.

Why should you network internally?

There are many reasons to build an internal network. You may have heard the phrase “it’s not what you know, it’s who you know.” In your company, this means strong relationships with your colleagues can improve your day-to-day work life, as well as your overall career trajectory. Here are three specific ways it can help:

Internal networking can help you do your job better by optimizing team collaboration. If you know your colleagues well, then when there's an issue you know who to go to. And if there's an issue on one of your colleague's end, then they know to come to you. When you know each other well, you can have direct, productive conversations and get stuff done quickly. Working with someone you know well, as opposed to someone you don’t know at all, is the equivalent of Zooming with someone using high speed Internet service versus using a dial-up modem.

Networking internally will cause your profile in the organization to rise. People will know who you are without even knowing necessarily what it is that you’re doing. Thus, when it comes to cross-office, inter-team, or cross-discipline projects, you'll probably be a part of those dialogues. Perhaps not immediately, but in the medium to long term your ability to connect with colleagues and managers will open doors for you internally. You’ll be seen as someone who’s driving productivity and collaboration.

Many people you know are probably those you’ve gone to school with or worked with before. They’re part of your external network now, but previously they were internal connections. When you go to external networking events, you may bump into people you’ve come across earlier in your career. That can be a nice opportunity to catch up and find out what each other are doing. So, when you internally network, external career opportunities eventually may present themselves, as your ex-classmates and ex-colleagues already know your skills, talents, and personality.

How to network internally

So, there are certainly some major benefits to internal networking. But how do you build your internal network? People tend to overcomplicate and overthink it. Putting yourself out there can be scary, especially at a new workplace. However, there are some guiding principles and tips that anyone can employ to start building a healthy internal network. Here are X:

1. Introduce yourself in the hallway

It may feel awkward in the beginning, but it’s important to take the initiative and introduce yourself to other people in your organization. So, when you see someone in the corridors of your office, just stop and start a conversation. Keep it simple and introduce yourself. It doesn't have to be particularly long winded; you just want to open a dialogue. Something straightforward such as the following works well: “Hi, my name is ___. I’ve seen you around before and just wanted to say hello.” Then, when you see that person again, talk to them again.

The best way to truly connect with someone is face-to-face. Networking works best when you can look at someone and hear their voice. It’s about real human interaction. Of course, now this isn't always possible given that so much of our work is done virtually. That said, video conferencing solutions are adequate substitutes for in-person meetings. Keep in mind, though, that networking through email doesn’t work. You can’t build strong interpersonal relationships if you only correspond through slow message chains. Email lack the personal, human touch that’s required for maintaining a lasting connection with someone.

Every healthy relationship is based on give and take. Relationships are based on receiving help, energy, and time from other people, and offering your own in return. The same applies to internal networking and the relationships with your colleagues. So, try to do a favor for your colleague first before asking them to help you. It doesn’t have to be anything big; small gestures go a long way. For example, you could inform them of Trello alternatives. Going out of your way to try and help someone else will be remembered.

It’s also important to give more than you take. Keep “topping up” your relationships. Be genuine. People will regard you as a helpful, positive presence in their life and will be happy to see you. They’ll be much more inclined to give you their time and help you out when you need it.

You may already be connected to some of your colleagues through Facebook, Instagram, or LinkedIn. Although social media platforms can never replace the need for real human interaction, they can supplement the growth of your internal network when used effectively. Remote content shared through social media can instantly gain broad visibility and engagement among your whole internal network. Your connections, as well as their connections, may see, share, or comment on your post. These connections may also engage with each other, and now your content and social media page has become a place where others can expand their networks, too.

Remember, though, that anything you post or repost online impacts your personal reputation. With that in mind, select a set of topics that you’ll stick to. Steer clear of content that doesn’t fit to the professional image you want to project.

5. Stick to your word

The most important part of helping other people is to do what you say you’re going to do. You don’t want to be viewed as someone who doesn't keep their word. Lightening someone’s workload is great, but if you fail to keep your word, your relationship will suffer. Honoring any commitments you make to your colleagues will earn you a reputation as someone who can be trusted and relied upon.

A key part of networking is paying it forward. If you connect with a colleague, but neither of you connect each other to someone else, then you aren’t forming a network. So, make sure you're introducing colleagues to other internal members of your organization, or to external connections that might be beneficial. This shows you’re genuine in your intentions to grow lasting relationships and build a community of like-minded people.

Perhaps the most important aspect of internal networking is that it never ends. It’s not a case of building a network and then closing yourself off to any further new connections. If you stop networking, your network stops growing. And if it’s not growing, then it’s either stagnating or dying. So, you need to be networking all the time.

This may sound daunting, but it needn’t be. Keep your networking brief; say hello, pay attention, listen, open a dialogue. A top tip for keeping small talk fresh is to bring up industry news. If you work in cybersecurity, for example, you could discuss a recent eSecurity Planet article. And when the timing's right, go a bit further by having a deeper relationship over a coffee, then take it from there.

Victorio Duran III is the Associate SEO Director at RingCentral, a global leader in cloud-based communications and collaboration solutions. He has over 13 years of extensive involvement on web and digital operations with diverse experience as web engineer, product manager, and digital marketing strategist.

Ten years ago, when I entered business school, many professionals told me that the journey ahead required significant investment in professional networking. So I followed their advice, and soon my calendar was filled with various networking events and meetings all over town.

How Holiday Networking Has Changed After Covid-19

Many rituals and habits changed after Covid-19, and the surge caused by the delta variant means this holiday season will still be subdued. In-person gatherings in hotspots will be limited, parties will be canceled, and annual catch-ups will still likely be virtual.

Informational interviews are treasure troves of information. What you collect from these types of networking meetings—in which you build relationships with people at the organizations you want to join—can provide you with insights that can help you improve your resume, cover letters, and interview answers.

4 Types of Networking Emails—and How to Write Them

The more time that passes after you meet people for the first time—either in person or virtually—the harder it is to remember them. This is why, when you're job searching, it's important to take notes after meeting someone new.