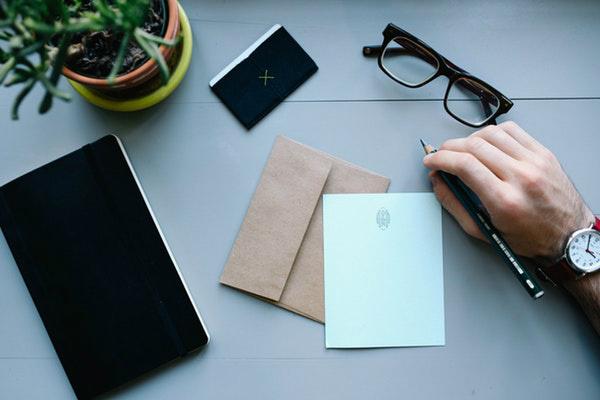 I’ve never once enjoyed writing a thank-you letter. I’ll admit it—I find them awkward and tedious. Growing up, after every Christmas and birthday my dad sat me down with a list of the gifts I received from relatives and stack of cards. It was tortuous. I never had any idea what to say, I was used to just saying “thank you” in person. Sue me—I was eleven and not Emily Post. Writing the letters took all day, and I still carry the resentment over lost time. So trust me, I’ll be the first to tell you when we can finally do away with the thank-you letter.

That said, the thank-you letter is absolutely still a thing, and you should be sending them after interviews.

I know, I know. I’m sorry, I wish it weren’t so. But let me tell you this: after a solid interview—one that you feel positively triumphant about upon leaving—sending a thank-you note to your interviewer is one of the classiest things you can do. It’s like the pocket square to a well-tailored suit. So let me give you some tips on how to write a truly stand-out thank-you letter, as I’ve had more than sufficient practice.

I know what you’re thinking: Paper mail? What year is this, 1885? Things have evolved a little since Doc Brown had to send Marty McFly a letter via Western Union, Kaitlin. Sure, but hear me out.

No one’s ever seen a hand-addressed envelope in with their stack of bills, junk, and catalogues and gone, “Ugh, gross. Why would someone send this?” No—we see something not written by a computer and our immediate reaction is, “Ooh, who’s this from??” And who should be sparking that handwritten-letter-glee in your interviewer? You.

I’m an advocate for the handwritten touch, but there is absolutely nothing wrong with a well-written, thoughtful email. When choosing between email and paper, take a look at the company and its culture. One general rule is that, the more conservative the office culture, the more a handwritten letter might be appreciated. But at a tech startup, I’d go the email route—a paper letter might be treated a bit like the monolith in 2001: A Space Odyssey. But even that’s not a hard-and-fast rule. Etsy is a tech company but, if I interviewed there, I’d definitely go with paper because of their focus on handmade goods. So don’t just pick email because it’s easy or paper because it’s unique: choose the format that demonstrates you appreciate the company’s culture and vision.

If you go the email route, your first step is deciding who you should even be emailing. The simplest answer is: everyone you spoke to throughout the interview process that day—you don’t need to send an email to the person at the front desk or the person you said “hi” to in the bathroom, but anyone who you formally spoke to should get a note from you. Individually—don’t lump them all into one group email. Everyone’s on enough group email chains as it is. I’ve seen advice out there that suggests writing the emails ahead of time, then sending them once you leave the office. I’ll argue against that: don’t write them until afterwards. That way you can mention in the email something that you two spoke about in the interview, like an industry trend or a mutual fondness for pub trivia. It doesn’t have to be anything fancy, a few lines will do. But make sure it’s genuine and unique to the individual. You don’t need to send it the minute the interview ends, but later that day or early the next is best.

When writing a paper thank-you note, blank stationery is your best bet. You can go the expensive route if you want, with special stationery from places like Paper Source or JAM Paper & Envelope. But more economical options from Target or Amazon are perfectly alright, too. You especially don’t need to spend inordinate amounts of money on single-serve cards with pre-written messages—money issues aside, they’re disingenuous compared to notes that are entirely handwritten. Choose a black or blue pen, use your best handwriting, and get it in the mail immediately. USPS is not exactly known for their prompt deliveries so the quicker, the better.

Whichever method you choose, the message inside is going to be about the same. Post-interview thank-you notes should never read like a recitation, but there does exist a formula to a good one:

It’s a pretty simple formula, but a useful one. Let’s see it in action:

It was great to meet you on Tuesday. Thank you so much for taking the time to speak with me in more detail about the associate editor position—I really appreciated your perspective on where Vault is going in the future and how the position fits into that framework. And I was particularly excited about our conversation about expanding the blog, as I’m interested in gaining more writing experience and learning more about the career industry. I look forward to speaking further about the position, and hope to hear from you soon. Have a nice weekend!

Yup, that’s it. You don’t have to gush or go overboard—it’s just a simple touch to keep you on the person’s radar, and to let them know again that you truly are interested in the job. Think of it as the bonus track to your cover letter, bringing the whole process full-circle.

A post-interview thank-you note is one of the classiest moves you can make while interviewing for a position—like top-hat-and-monocle classy, but less weird. So despite the fact that writing them can be stress-inducing and/or mind-numbing, I urge you to do it. A well-crafted thank-you note can make you stand out from the crowd of applicants as someone that your interviewer really wants on their team. And if that doesn’t make it still relevant, I don’t know what does.

How to Make Small Talk Before Your Interview

You’ve practiced your answers, prepared questions you want to ask, and feel confident about going into your interview with a sense of direction. The only thing that’s got your nerves a little off balance is anticipating the small talk pre-interview—which interviewers often use to gauge your personality and get a sense of who you are, unrehearsed.

How to Appropriately Cancel a Job Interview

Unfortunate situations sometimes come up that we can’t control; life throws punches and we have to try to roll with them in the most professional way possible. For example, you have a valid reason to cancel an interview but don’t want to lose the opportunity or make a bad first impression.