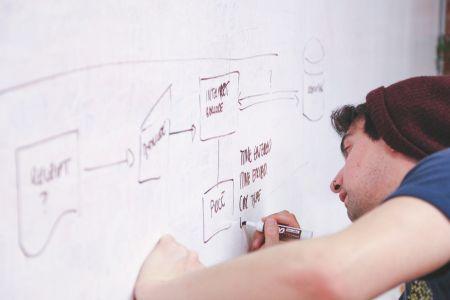 There’s an interesting conversation going in certain corners of the tech industry at the moment related to how best to source employees with the requisite coding skills to build successful businesses.

At the heart of that conversation: the idea that current interview techniques focus too much on factors that don’t matter in the day-to-day reality of the job, such as GPA and ability to memorize pieces of code, and not enough on identifying people with the characteristics such as the ability to overcome setbacks.

Tech entrepreneur and activist Anil Dash distilled all of that into a post on Medium that inveighs against the whiteboard interview—a staple of many tech recruiters that, Dash argues, puts the interviewee in a position where they’re being evaluated for their rote memorization skills rather than their ability to create code under real-world conditions.

Or, as Dash puts it in the post (emphasis his):

"Like a lot of cargo-cult tech trends, whiteboard algorithm sketching started to go horribly wrong when people started copying a behavior at a superficial level while ignoring the cultural and emotional context that informed that behavior. In short: people copied what was being done without knowing why they were doing it.

In this case, instead of finding out how a candidate solves problems, interviewers ended up asking them to perform a ritual that’s mostly about reciting trivia. The immediate result is lots more stress for interviewees, and perpetuation of structural barriers for people who are already underrepresented in the tech industry."

At heart, what's truly interesting about the post is that last sentence: the idea that the interview process itself is shutting otherwise capable candidates out of an industry that is thirsty for coding talent.

Which brings us back to the idea at the start of this post: the conversation that is happening in tech right now. Prompted by Dash's post, a series of articles outlining Medium's attempts to revamp its hiring processes for engineers—first announced in the summer of 2016—have also been making the rounds today.

Key among their proposals: redefinitions not just of characteristics that the company screens for in interviews, but a thorough explanation of the things that it does not want anyone in a recruiting role to take into consideration as part of the hiring process. Or as the company puts it: "what we don't screen for."

Of the four-part series that it published on the process, it's that section that gives us the best insight into the changes that are taking place at Medium and, presumably, elsewhere in the industry as companies attempt to broaden the pool of candidates they're hiring from in order to meet demand. Here are just a few of the characteristics that Medium has explicitly ruled out:

Whether the kinds of changes that Dash—who is attempting to employ a different model at his own company—and Medium lead to better outcomes in terms of products and services being developed is very much open to question at this point.

But in a sector that is struggling to find talent, and that has historically been known as a difficult place for female and minority employees to get ahead, this kind of conversation and attention to process can only be a good thing for widening the net to ensure that anyone with the requisite skills has the best possible shot at making it through the hiring process. That's not just good for diversity; it's good business.

You may have heard that there's been something of a kerfuffle over an Executive Order that attempted to place a temporary ban on immigrants from 7 countries. You may also have heard that a number of Silicon Valley firms—over 100 at last count, including giants like Apple, Facebook, Google, Microsoft and Twitter—have filed a brief in opposition to the ban.

As we watch the Presidential election recede from view and focus on what the future has in store, one issue highlighted in the campaign touches all of us in the tech community: the lack of representation of women in key positions in the highest echelons of our society. And that's something that's more than just an anachronism—it may be actively hurting companies.

A Day in the Life of a Medium Employee

The online platform bent on getting you to read again took the world by storm when it launched in 2012. Now, with an office in NYC and its headquarters in San Francisco, Medium is growing exponentially as readers and writers flock to the site.