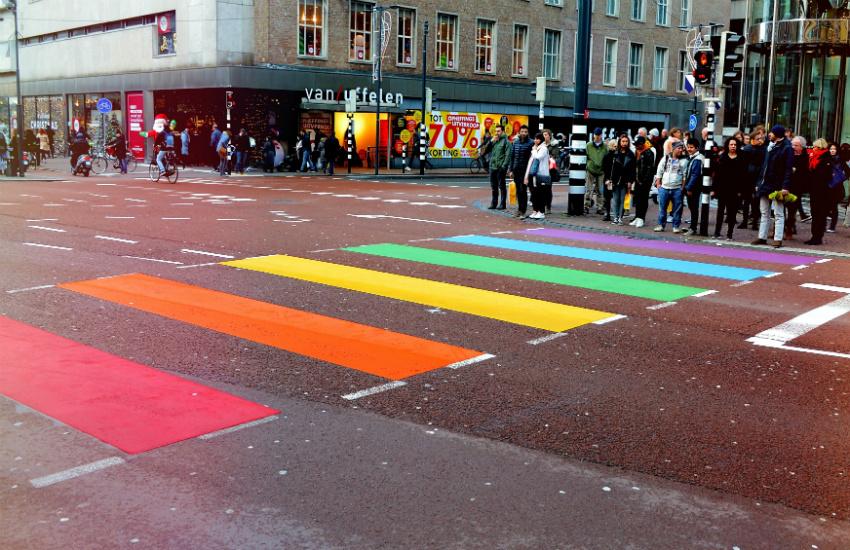 As I’m sure you’re well aware, June is Pride Month—and as my hometown plays host to World Pride this year, let me tell you, hype levels are through the roof. We’re celebrating 50 years of Pride, as well as an LGBTQ+ history that extends through human history. There’s been some more chitchat this year about how Pride has become something of a corporate commodity—which is a fair point to make. We all like to celebrate LGBTQ+ identities and show our support, but somehow commercializing it doesn’t feel right—even if the Pride Converse are adorable.

That’s why this June I implore you to take a step back and try to connect with this movement on a more personal level. Our commutes can be an important way in which we take time for ourselves, and listening to the stories of queer people and engaging with them is, in my opinion, a much more constructive way to participate in Pride month than simply buying something with a rainbow on it. (Although don’t forget to fly those rainbow flags either, and trans flags and pan flags and ace flags—I want to see every last beautiful one out there.) So here I offer you a selection of fiction, nonfiction, young adult, and graphic novels that celebrate the many shades of queerdom and the impact LGBTQ+ people have on art, history, and the world.

Jessa-Lynn finds her dad dead at the family taxidermy shop, and things only get weirder from there. Which is fitting, for a book that takes place in Florida. Kristen Arnett is a contributor at LitHub, and this is her much-anticipated first novel.

This book is tied with Friday Black for my favorite book of last year. It’s that good. After her father dies, sharpshooter Jessilyn Harney dresses up like a man to go hunt down her outlaw brother and bring him home. It’s high Western drama—with all the quiet contemplation of a beautiful literary novel.

Paul Takes the Form of a Mortal Girl—Andrea Lawlor

Paul owns a gay club in 1993, and everything about it is the epitome of the scene: ‘zines, Riot Grrrl, queer theory classes, you name it. Paul is also a shapeshifter, which allows him to go on an odyssey through the gay experience at the end of the 20th century firsthand.

Fresh out of prison, Jodi meets young mom Miranda. The two of them try to start over in West Virginia, while Jodi is haunted by ghosts from her past. This is an atmospheric read, so if you’re looking to bask in the blue mountains of Appalachia, this is for you.

In an alternate universe, the son of the first female president and a prince of England begin a secret, trans-Atlantic romance for the ages. If you’re looking for a read that’s pure fun, this is it—it’s funny, the characters have such personality, and it’s a nice reminder that, sometimes, love conquers all.

Ocean Vuong is better known as a poet—this is his debut novel, and it came out today (Tuesday). So I haven’t actually read it. But—I got the inside track at my local bookstore, and they’re obsessed with this novel about family, hurt, and survival. I’ll be snagging it on my way home.

A history of queer musicians, from jazz and blues artists to the more ubiquitous Freddie Mercury and George Michael. This book looks into the influence of queer artists, as well as queer music’s place in the LGBT movements of the 20th century.

How to Write an Autobiographical Novel—Alexander Chee

Alexander Chee is a tour-de-force. In his nonfiction debut, his essays span his experiences as a Korean-American, a gay man, and an artist. Each essay is a masterpiece, which is no less than one should expect from this incredible author.

The Gay Revolution: The Story of a Struggle—Lillian Faderman

A fairly comprehensive history of the modern LGBTQ+ movement, from the 1950s until now. 2019 is 50 years since the Stonewall Riots, so it’s important that we take a look back at how we got from then to now—at how far LGBTQ+ rights and acceptance have come, and how far there is to go.

Madden’s memoir about growing up queer and biracial in Boca Raton, Florida, is a little insane in the best way. She grew up in the world of the wealthy, with family plagued by drug and alcohol issues, and found her footing among other girls with absent fathers.

When Brooklyn Was Queer—Hugh Ryan

Spoiler alert: Brooklyn’s queer now. However, this book is here to remind us that Brooklyn’s been queer for a lot longer than we might think. From Walt Whitman to Josiah Marvel, this book captures how LGBTQ+ people have built Brooklyn into the thriving neighborhood it is today.

In this hilariously heart-wrenching memoir, Jacob Tobia talks about growing up “male” without ever really feeling that way. They talk about toxic masculinity and how the gender binary is a bunch of nonsense. Trans-inclusive feminism you guys, let’s get it.

Gender-flipped King Arthur, in space. Need I say more? I do, actually. It’s written by a married couple. Beat that for cuteness-factor.

Danny Tozer is a trans girl who isn’t out yet—until the superhero Dreadnought passes his mantle and powers to her, giving her an outside that matches her insides. So now Danny needs to adjust to possibly the most sudden transition ever, and hunt down the cyborg villain threatening to destroy the world.

I Wish You All the Best—Mason Deaver

When Ben comes out as nonbinary, their parents throw them out. They move in with their estranged sister, enroll in a new school, and develop a friendship—and maybe more—with cool-guy Nathan Allan. A look at anxiety, the damage done by gender roles, and how things can always get better.

The Gentleman’s Guide to Vice and Virtue—Mackenzie Lee

This is the ultimate summer book—an 18th-century road trip (it’s called a Grand Tour) where the wealthy Monty has a year of traveling and carousing to convince his BFF Percy that they should be more—until Monty makes some poor choices and this “romance” tumbles straight into classic adventure novel.

Tash wakes up to find her obscure, Anna Karenina-based webseries, “Unhappily Families,” has gone viral and is nominated for an award. She starts up a cyber-thing with a fellow nominee and now has to figure out how to tell him that she’s romantic-ace. Almost as much drama as a Tolstoy novel.

Tell Me How You Really Feel—Aminah Mae Safi

Sana’s a cheerleader, and budding director Rachel is casting her first movie. Sana’s the perfect lead, but Rachel can’t stand her. Until they fall in love, because of course they do—this book is basically a rom-com written down.

Hazel and Mari meet at church bingo in 1963—not a great time for queer women of color to fall in love. Their families split them up, they each marry men, and they meet again decades later—at church bingo. Granny love is real love, y’all.

Frederica has the biggest crush on Laura Dean. But Laura’s not a great girlfriend. Their relationship spirals until Freddy needs to make some decisions about how healthy her relationship is, and whether she should stick around with her “dream” gal.

Jory transfers to an all-boys private school and decides the join the theatre club. It goes poorly. But, he’s welcomed with open arms by the boys running the backstage, which, as it turns out, is more like Narnia than a storage space. This one’s more of a comic, but it’s just breaking out and it’s dead-cute to boot.

Chris is hired at her local record store, and she's so happy to have to world’s coolest job. Until her favorite singer, Rosie Riot, goes missing and her coworkers reveal they’re on a Rosie-rescue mission—because they’re actually a patriarchy-smashing vigilante fight club.

All someone said about this book was, “queer space opera,” and I freaked out and bought it last week. Which was weird, since they weren’t talking to me. But, you know. Queer space opera. With beautiful art. What more do you want?

5 Ways to Make the Most of Your Summer Fridays

For many people, Memorial Day Weekend marked the beginning of "summer Fridays": that wonderful, warm weather tradition that's the closest thing many of us will ever get to an official summer break (aside from taking a vacation). More and more, employers are allowing their employees to take shortened days on Fridays during the summer.

A friend of mine was telling me not long ago that, for a culture to persist and thrive, it needs media representation. I agree with him completely.

How to Create a Safe Space for Transgender Coworkers

A safe space is an environment where people feel secure that they won’t be discriminated against, harassed, or otherwise harmed emotionally or physically. Ideally, every place should be a safe space for everyone.