How One Consulting Firm is Reinventing Campus Recruitment 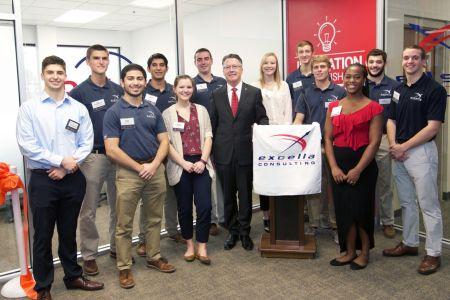 The question of how companies find and recruit talent is one that has increasingly been tied into higher education in recent years: visit any college campus in fall, and if you don't find a career fair in progress, you'll probably find listings for an upcoming one.

While the rationale for this system is simple to comprehend—major employers can personally vet hundreds of candidates in a short period of time; students can get a sense of the companies they might want to work for—it's not something that works for everyone.

In the consulting industry, for example, large scale companies can afford to maintain recruiting operations at campuses across the country. Smaller firms, however—especially those with just one or two offices—face a stiffer challenge in locating top talent. Not only do they have to compete with the biggest players in the field, but they have to do so without the benefits of an instantly recognizable brand name, and with a significantly higher level of inherent risk in the eventuality that a bad hire is made, or that more training than previously thought is required.

So what, then, is a smaller firm to do if it wants to compete for talent, while taking as much of the risk out the equation as possible?

One possible solution is for companies to try what Washington DC-based Excella Consulting is doing some 250 miles away from its home office, in Blacksburg, VA.

Blacksburg, for those who are unfamiliar, is home to Virginia Tech—a college that turns out exactly the kind of computer science and quant-focused graduates that Excella needs to drive its business forward. But the quality of those graduates isn't exactly a secret, which means there is stiff competition for their services, often from firms with deep pockets and huge brand cachet—including the likes of Microsoft.

So, since 2009, Excella has been operating a student "Extension Center" on the VT campus, where students can learn to "bridge the gap between the classroom and how tech development works in the real world," according to Margaret Archer, who is the director of the firm's university programs.

What that means is that, throughout the school year, students have the opportunity to work, as paid interns, on real-life software development projects for Excella clients, while being supervised and mentored by experienced consultants. According to Archer, all parties benefit from the situation: clients benefit from lower costs if they opt to utilize the Extension Center; students get the opportunity to learn new programming languages and approaches, including real-world experience in an Agile environment; and supervising consultants get to develop their mentor and leadership chops. Oh, and it's cost-neutral too: the client work the students do is built into the contracts for the projects, which means that the net cost of the firm's recruitment for anyone who goes through the program is zero.  Clients so far have included Marriott International, the Ovarian Cancer National Alliance, federal agencies, and the Compressed Gas Association, for whom students at the center built a membership website.

While not currently formally affiliated with Virginia Tech, the program has proven to be such a success that the firm has recently expanded it, increasing the available space from 12 to 24 students, and 6 fulltime managers. And, at a ribbon-cutting ceremony for the expanded center last week, Virginia Tech President Tim Sands was in attendance, and commended the program on its ability to bridge the gap between academia and businesses and to provide more meaningful learning opportunities for students.

Ultimately, Excella's main goal is to use the program as its major recruiting pipeline. As Archer pointed out to me in a recent interview, since her arrival in 2012, the firm has only lost one employee who was hired out of the Extension Center—and, even then, that individual had spent five years with the firm, having started in the program as a freshman in 2011.

But, while recruitment may be the ultimate goal for Excella, not every student who participates ends up with an offer from the firm—and some of those that do opt to work elsewhere. That, says Archer, is part of the cost of doing business—even as she notes that, while it may be disappointing to lose a student to a competitor, it's still proof that the skills and knowledge they're picking up are relevant and in demand in the market, and "there's satisfaction in knowing that we've helped these students make the right decision for their personal career goals."

Having just opened the newly-expanded extension center, Excella could be forgiven for resting on their laurels a little but, if anything, the experience only seems to have increased ambition for the program. Archer notes that the "ultimate goal" would be for the program to turn out 30 or more graduates twice a year—and also to replicate the program at other campuses.

The bottom line: Excella seems to have hit on a recruiting strategy that's more efficient than traditional campus recruiting, costs less (even nothing), gives the company months to assess and develop potential talent, and results in off-the-charts retention levels.

Which leaves just one question: why aren't other companies doing things this way?

What Trump's Victory Means for the Defense Industry

As we pick over the bones of the election result, one question that surfaces over and over again is this: how many of his campaign promises will President Trump be able to keep, and to what extent?

Of particular interest to those in the consulting industry: Trump's spending plans, especially those that relate to defense—a corner of the industry that has taken something of a pounding since the sequester came into effect in 2013.

What's It Like to Work for a Top Boutique Consulting Firm?

Tara Sullivan is an Associate Consultant at Putnam Associates, a boutique life sciences consulting firm that serves a global client list from its base in Boston. Vault recently caught up with Tara to find out a little more about what it's like to work at Putnam, and the skills and experiences that she's learned during her time at the firm so far.

With the launch of our European consulting rankings yesterday, Vault's 2016-17 consulting rankings rollout is now complete. If you've been paying attention over the past 6 weeks, you'll know that we've offered our signature lists of companies in 3 major regions for the consulting industry: North America, Europe, and Asia-Pacific.