5 Tips for Paying Off Your Student Debt 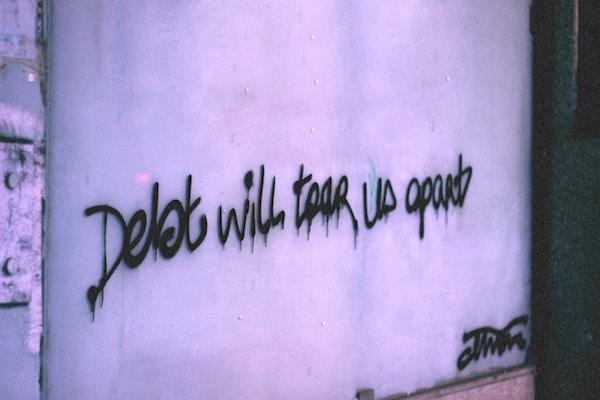 Last summer, I came to a sobering realization. After logging into my student loan account, I discovered that the amount I still owed was about the same as it was eight years ago. Eight years ago, I graduated from college. Since then, I made minimum payments on my loan every month. Today, I’m a 31-year-old, single, female millennial. I live and work in Southern California, working a full-time job and freelancing on the side.

The realization I came to was that my student loan was not going to be paid off through a fairy godmother, dead relative, living relative, or white knight spouse. Only I would have to pay it off. I could have tried to live in denial. Instead, I spent the next six months fighting for my life back.

As a result, today I owe less than half of my loan. This time next year, I'll be debt-free. Below is how I, a person who does not have a trust fund or cosigners, faced my fear and paid down my student loans.

1. Sacrifice everything (except lattes).

The first step towards student loan repayment freedom is to give up your existing freedom. According to many financial gurus, you’re either supposed to “stick to a budget” or “stop buying Starbucks lattes.” Or, you should do both.

But sticking to a budget as a long-term plan, 365 days a year, 24/7, for years on end doesn’t actually work. Here’s what happens when you try to carefully budget your life away: life happens. Maybe you get pregnant, or decide to get married. Many milestones come with bills. These are subsequently added to the budgeting pile. Then come the incidents. You have to go to the ER after being in a car accident, or you lose your job. Another set of bills is created.

Suddenly, you went from having a student loan to having bills from life milestones and the not-milestones. If you have average financial means, you wind up doing one thing: you work around all of this acquired debt until it spreads you so very thin.

My strategy for repaying half my loan this year was simple. I sacrificed everything. I don’t and have never owned a car, so I saved on insurance, car payments, and gas. I don’t have my own apartment, which would be bonkers expensive for a single person residing in my particular area. I have been careful not to use credit cards. Ordinary life rituals—dining out, shopping, and taking vacations—were done in extremely spare amounts.

The one thing I do keep, and this is controversial, is the Starbucks latte. C’mon now. You can’t expect a girl to run on fumes for her entire life. Give up the big-ticket items before those lower on the totem pole. Starbucks is the lowest sacrifice. I can assure you giving it up solely will not change your student loan balance.

There's a stereotype of student loan poverty that involves eating a lot of ramen noodles. It’s because they’re cheap at 40 cents a pack. There’s also nothing nutritional about ramen noodles. Make tacos, not ramen. Go to the grocery store. Buy ground beef, seasoning, shells, tortillas, and all of your favorite toppings. It might be a big(ish) bill, but don’t despair. The food will keep you fed and happy for many dinners to come. The lesson learned here is cook in, instead of dining out. It’s one less bill to worry about, even if you’re only paying happy hour prices.

I got to a certain point with my student loans where I could not decipher the language on my billing documents. The way it was written was too convoluted. It was like solving the riddle of the Sphinx! Here’s the secret: many loan documents are purposefully written in a manner that confuses readers. When you are confused you cannot make the best decision because you do not have the facts—this leads to getting easily frustrated, and making a minimum payment to avoid the headaches.

I was watching a news segment on CNBC about student debt to try to understand more about my situation. The man interviewed seemed like he understood quite a bit about the process. He also had great finance credentials. I immediately reached out to him via email. This was done purely in the off-chance that he might help me out, on a pro-bono basis. He did and he broke everything down, piece by piece. My headache was gone, and my heart was filled with gratitude.

If you don’t understand your student loan documents, do not stay in the dark. Seek out the help of a financial advisor or lawyer who is well-versed in this type of documentation. They will help you translate it so you better understand what your hard-earned money is going towards.

4. Be OK with losing your mind a bit.

Paying your loan off, consistently, and well over the minimum payment requires never-ending commitment. I do believe you have to lose some of your mind to do it on your own. You must also be comfortable with the knowledge that there’s not much waiting for you on the other side. This is not a marriage or a pregnancy where, after months of hard work, someone waits for you at the end of an aisle or a baby is born. At best, you’ll receive an increased credit score. You may also have to wait a little while for this to go into effect.

Like many people, I use the quiet hours before I fall asleep to wonder at the future ahead. Before I started making my loan repayments in full, I had a little voice whispering that I did this all wrong. I should never have had a dream, ambition, or desire to pursue this line of work. This voice has since been silenced with a wave of memories. Moments spent in college having fun with friends, learning from professors, and my many writing gigs over the years. They were not mistakes. Everything in my life—even my loan—led to them. And led me to myself.

Your student loan was not a mistake. Whether you took one out for your undergrad degree or another type of technical training, it was not a mistake for you to aspire to higher education. Think about what you’re really saying when you imagine living a life without any complications. You’re envisioning something that can never be. If not a student loan, you’d probably have debt in some form later down the line. It’s inescapable.

My best advice to anyone who has a loan is not to pay it off as quickly as possible. For most people, that’s as effective as squeezing blood out of a turnip. Instead, charge into your own life and reevaluate every aspect of it. What can you change to decrease finances significantly right now? Do you have any other outstanding debt, like credit cards? If so, you’re going to need to establish a strategy as quickly as possible for eliminating any and all debt.

It won’t be pretty. It will be a crawl, not a climb. But, if you keep crawling and don’t give up, you’ll reach the other side.

4 Online Classes That Will Improve Your Soft Skills

I’m a huge fan of personal and professional development. Regularly setting new goals helps you tackle boredom, adds skills to your résumé, and increases your chances of securing the job you want (or a promotion if you already have the job you want).

How Networking Helped Me Get My First Internship

If you're a fan of David Sedaris' essays, you're likely feeling like I am of the 2018 graduating class at Oberlin College: jealous. Jealous because, last Monday, the best-selling author and comic genius delivered the class of 2018 commencement address.