3 Things Trump & Clinton Have Done that Would Get You Fired 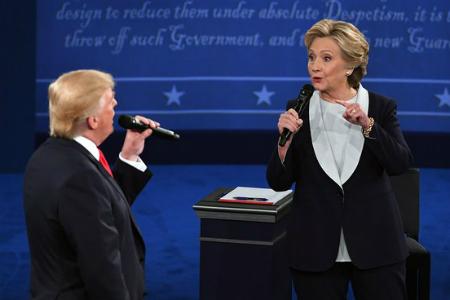 I’m no HR expert, but as a career advice writer, it’s hard to sit through all the shenanigans of the 2016 presidential election without thinking that the candidates competing for the most important job in the country haven’t exactly acted like model employees. In fact, both Hillary Clinton and Donald Trump have done a bunch of things that would get you, me, or any normal office shlub fired in the blink of an eye. Fortunately for them, it’s been a long time since either of them was anything but the boss, so they’ve been pretty close to unfireable (although Clinton’s did have a direct boss as Secretary of State—President Obama). Here are a few of the candidates' actions that would be violations of any normal company’s employee handbook.

I’m sure you already know this, but earlier this month the Washington Post released a video of Trump bragging to Billy Bush about his ability to sexually assault women because of his celebrity. This is probably the most obvious example of something that would violate pretty much every company’s hostile work environment policy if an employee spoke like this in the office. An interesting thing to note here is that Trump was in an office setting of sorts. On the bus with Trump and Bush were several other people, including an Access Hollywood producer, a production assistant, Trump’s bodyguard, and his PR person--any of whom could have legitimately complained about their hostile work environment. And interestingly, this leaked conversation did get at least one person fired; Billy Bush was terminated from the Today show when the video became public.

Hillary Clinton’s Use of Personal Emails

As Secretary of State, Clinton used a private email server instead of her state department email address to conduct nearly all of her state department business. Using a private email rather then a company email address for work emails is likely a minor violation of most office policies, except if you work in a government security environment. Clinton’s use of the private email to receive and transmit emails with sensitive and secret information was “extremely careless” according to FBI director James Comey and would likely have gotten a low-level government contractor fired on the spot.

Clinton’s and Trump’s Inability to Use a PC

This probably wouldn’t get you fired but it would make you virtually unhireable for an office job in 2016. As part of the email investigation discussed above it was revealed that as secretary of state Clinton did not have a computer in her office and conducted all of her correspondence by Blackberry or phone. Similarly Trump, a man who runs his own large, international business, has no computer on his desk and reads emails and news stories from the web that have been printed for him by an assistant. It’s remarkable that our next president, whoever it is, will not be able to put “MS Office” under skills on their resume.

How to Optimize the Start of Your Day

The first thing many of us do in the morning is reach for our phones—hit snooze, catch up on social media, or start tackling the ever-multiplying emails in our inbox. But what if there was another way to start the morning in order to optimize the natural energy we awake with but often ignore (thanks to coffee)?

Thankfully, according to science, there is.

How to Handle Workplace Conflict

We spend much of our adult lives in the workplace, interacting with individuals we may never have chosen to interact with otherwise on a daily basis. It is inevitable that, at some point, there is going to be a clash of egos in the workplace.

7 Ways to Eat a Healthy Lunch on a Budget

As the FDA deliberates the terms of what food it deems as “healthy” yet again, it’s understandable if some Americans are more confused than ever regarding what they should and should not eat. As sugar takes over the “worst” category from fat, nutritionists and scientists are delving deeper into what qualifies as healthy food, and how food affects us physically and mentally.

When Motherhood Helps, Not Hurts, Your Career

When you think of careers with poor work-life balance and thus ones that aren't very accommodating to working mothers, you might think of investment banking, or law, or even technology (despite the valiant attempts by many tech firms to improve their policies for working parents). But what you probably won't think of, and what's arguably a career with even poorer work-life balance, and even less accommodating to working mothers, is comedy.