This Trick Will Help You Fight Phone Addiction at Work 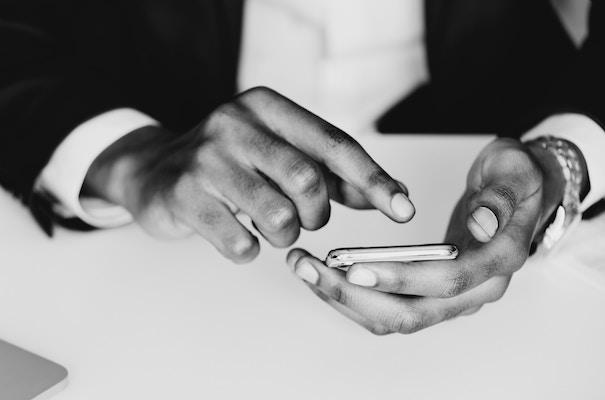 Let's face it, most of us are addicted to our phones. We mindlessly scroll through Instagram. We check our email three times a minute. We look at Facebook, Twitter, news feeds, and other apps way more than our eyes and brains can handle. And yet we do nothing to fight against this addiction. Or, next to nothing. In other words, we're wasting valuable time at work.

But nothing has worked over the long term. I usually revert back to my habits, and pretty quickly at that. Also, none of the things I've tried have been so convenient with respect to the way I work (I like to return most emails pretty quickly, even when I'm away from my desk, and I like to make sure I'm taking enough steps each day).

And so, my interest was piqued when I came across a story in The Wall Street Journal about going grayscale. That is, removing the colors completely from your phone so everything on your phone appears, more or less, in black and white. Like going from a color TV to a black and white set. I immediately decided to try it. And this is what I found.

I have a love/hate relationship with Instagram. There's so much I love about it, including the great inspiration I get from certain feeds (such as Vault's own Instagram!). But there's also a lot I don't love. This includes the envy that arises in me from other people's vacation images, the advertisements that appear in my feed, my own desire to post images in order to feed my unconscious desire for more likes, etc.

In any case, what I found when going grayscale is that I mindlessly checked Instagram a ton less. I checked it, but I didn't get hooked in and mindlessly scroll. That is, I checked the accounts I wanted to, but didn't waste time on feeds I didn't. Also, I felt oddly not compelled to post to Instagram at all. Not even a black and white photo. In the color-filled world I often had the urge to post two or three times a day (but rarely posted once a day), but in the grayscale world not much seemed "Instagram-Worthy."

Overall, I'd guess that I used Instagram about 75 percent less after going grayscale. Which was miraculous, freed up a lot of time at work, and seemed to point to this: that the vibrant colors my phone flashed back at me were blinding me to the possibility that most of what I was consuming on it wasn't worth consuming at all.

2. I reached for my phone much less often than usual.

The good news is that when I went grayscale, I did this almost never. I rarely reached for my phone out of habit. I don't know why, but I'd guess that my mind understood it would not be receiving much pleasure from my doing so (due to the lack of colors), and thus the reflex to reach for my phone wasn't there.

3. I had a hard time remembering how to put my phone on grayscale.

I've had my phone (an iPhone 6s) for several years but only recently realized it had this grayscale function. That's odd, isn't it? I think so. Also, here's how you put the iPhone 6s on grayscale: a) go to Settings, b) then General, c) then Accessibility, d) then Display Accommodations, e) then Color Filter, f) and then swipe the little circle to the right of Color Filters to turn all colors off.

This is not quite intuitive (if you don't believe me, first try to turn your phone on grayscale without following the above directions; you'll see what I mean). And so, I had trouble going back to grayscale when I wanted to temporarily see color (when I fell off the wagon). This led me to believe that perhaps the manufacturer of my phone doesn't want me to know about the grayscale function?

In any case, if you suffer, like I do, from phone addiction, I recommend you giving grayscale a try. At worst, it'll give you a glimpse of what the world looked like to this colorblind painter (a well-known patient of the late, great neurologist Oliver Sacks). And at best, it can save you hours and hours of mindless activity at work (and at home).

6 Bad Habits Causing You to Hate Your Job

If you spend Sunday nights dreading Monday morning, and spend your lunch breaks dreaming about a better job, you're probably stuck in a work rut. However, it might not mean you need to start updating your resume.

We've all likely experienced, on more than one occasion, an inability to focus on something at work when we're waiting for someone to text us back, or when we're itching to check out Instagram, or when we can't wait to see if a certain someone emailed us on our personal Gmail account (and we're unable to check our Gmail on our work computer). And so, it makes sense that when we leave our smartphones on and next to us (or on us), we might not be working at our most productive.

How to Outsmart Your Smartphone at Work

Here's some unsettling (though not too surprising) news: Our so-called smartphones are making us less smart. Indeed, according to a fascinating and scary Wall Street Journal article, several psychological studies in recent years have looked at the effects of smartphone use, and what these studies all show is that we're becoming less efficient, less creative, less able to solve problems, even less intelligent.