The Werewolf of Wall Street 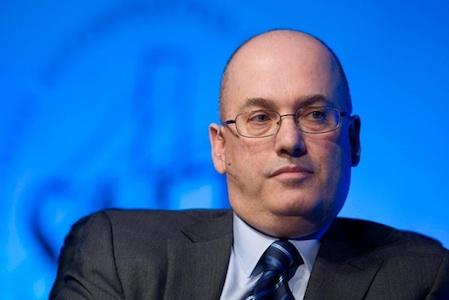 The greed is unimaginable. The hubris is pornographic. And the smug, arrogant mask on the main character's face will make you clench your fists and grit your teeth with rage.

No, I’m not talking about the latest Scorcese-DiCaprio collaboration but the latest PBS Frontline documentary, “To Catch a Trader,” which follows the U.S. government’s insider trading investigation of self-proclaimed Hedge Fund King Steven A. Cohen and his eponymous billion-dollar hedge fund empire.

The special, which originally aired this past Tuesday night, is currently available free of charge to the viewing public. And so, instead of spending your hard-earned fifteen bucks on the bombastic, too-long, empty, and tiresome “The Wolf on Wall Street,” head over to PBS.org and spend fifty-eight minutes to see where some of your tax dollars have been going since the early aughts. Which is when the Feds started tracking Mr. Cohen and his too-good-to-be-true investment returns.

“To Catch a Trader” has everything you would expect in a document of the American Dream gone wrong. It has horror. It has eerie instrumental music. It has thrilling chase sequences (no car chases, though). And it has a web of ungodly greed encompassing scores of cold-blooded criminals whose evil pales in comparison to that of the central evildoing character.

In addition, the documentary gives Wall Street neophytes a good background about the history of hedge funds (they were started in the 1940s but didn’t begin to flourish until the 1990s), a good primer on how and where hedge funds get their research (in part from relationships with brokers at large investment banks and at so-called expert network firms), and a good idea about what the culture is like at giant Wall Street hedge funds—or, at least, about what the culture is like at giant hedge funds such as SAC Capital and Galleon Group, both of which made the bulk of their money by trading on material nonpublic information. Which, as everyone who’s taken a Securities 101 class knows, is against the law.

Everyone, that is, aside from SAC Founder Steve Cohen.

Without a doubt, the most chilling sequences in “To Catch a Trader” are those showing Cohen in a 2011 videotaped deposition during a civil suit against SAC. Cohen, one of the fifty wealthiest men in the U.S., is asked whether or not he’s familiar with Rule 10b5-1, which prohibits trading on material nonpublic information. Cohen answers that he isn’t very familiar with the rule, that he doesn’t quite understand it, that he believes it’s a vague law, meant to be interpreted, and that the agent who asked him the question would have to explain it to him.

In other words, Cohen plays dumber than a platinum-plated doorknob (incidentally, something about Cohen’s face and his sinister stare during the deposition brings to mind a young Dick Cheney).

Later, Cohen is asked about SAC’s compliance policy. Specifically, he’s asked about the part of the policy that prohibits trading on material inside information. Again, Cohen answers that he’s not familiar with it, that it doesn’t ring a bell. Which makes for great greed-and-hubris cinema, but does nothing for the two or three people out there who still believe the government’s investigation of SAC and Cohen was nothing but a witch hunt.

Aside from the depositions, “To Catch a Trader” doesn’t provide much new information about Cohen and the Feds’ investigation of SAC (both have been written about extensively). However, Frontline does a great job of connecting all the well-known inside-trading players who’ve been busted in the past few years. And this web of greed is nearly as chilling as Cohen’s depositions.

In some way, all of the following people are connected (which leads me to wonder if, on Wall Street, Liar’s Poker has been replaced with Six Degrees of Insider Trading): Steve Cohen (who hasn’t been criminally charged for wrongdoing but whose firm settled a civil insider trading suit for $2 billion), several former SAC traders (many of whom have been found guilty of insider trading and are or will be serving hard time), Galleon Founder Raj Rajaratnam (who is currently serving an eleven-year sentence for insider trading), Rajat Gupta (the former McKinsey chief and Goldman Sachs board member who was recently convicted of passing along inside information), hundreds of expert network employees (who seem to be nothing but patsies with MBAs), not to mention the several bulge-bracket investment banks that receive exorbitant commissions for executing (inside) trades on behalf of hedge fund managers. (Incidentally, a number of the aforementioned parties also have a connection to the Wharton School of Business, which, full disclosure, yours truly attended as an undergrad many moons ago).

And if all that doesn’t sound like must-watch Internet television, and you’d rather enjoy a laugh than another dark and depressing film about Wall Street and its evildoers, then let me direct you to 23:07 in “To Catch a Trader.” There, in case you missed it a few years back during the most high-profile insider trading trial in history, you’ll be treated to the infamous high-pitched chuckle of Raj Rajaratnam. After Raj asks a fellow criminal, via wiretapped conversation, “How’s the market treating you today?” and his partner in crime replies, “Like a baby treats a diaper,” Rajaratnam performs his great schoolgirl giggle. It’s the sole moment in the documentary that will put a smile on your face.

Read More:
To Catch a Trader (video.pbs.org)
Best and Worst of 2013: The Year in Work and the Workplace
Take the RRAT (Raj Rajaratnam Aptitude Test)
Career Guide to Insider Trading, Chap. 19: Taking the Stand

Best and Worst of 2013: The Year in Work and the Workplace

When it comes to career-related news and developments, there was a lot to celebrate in 2013. There was also a lot to condemn.

While the jury deliberates to decide Raj Raj's fate, see how well you've been keeping up with the seven-week insider trading case, the U.S. v.

Previously, in chapters covering what to do if you find yourself in handcuffs (and not of the golden variety), we took a look at plea agreements (chapter 16), evidence shredding (chapter 17), and ratting out your accomplices (chapter 18). And in this chapter we look at the all-important choice between (1) testifying on your behalf, and (2) sitting still and saying nothing (that is, not testifying on your behalf).