The Revolution Against Open-Office Plans Has Begun 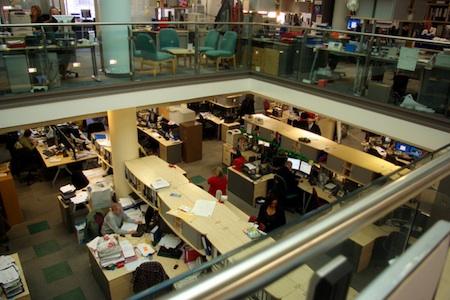 Although 70 percent of the American workforce now works shoulder-to-shoulder in football-field sized rooms without anything as much as an iPhone-thin wall separating their desks, studies continue to show that open-office plans are detrimental to employees’ concentration, productivity, creativity, stress level, and job satisfaction, not to mention their health.

The following is an excerpt from a January 7, 2014 New Yorker article called “The Open-Office Trap” written by Maria Konnakova:

In 2011, the organizational psychologist Matthew Davis reviewed more than a hundred studies about office environments. He found that, though open offices often fostered a symbolic sense of organizational mission, making employees feel like part of a more laid-back, innovative enterprise, they were damaging to the workers’ attention spans, productivity, creative thinking, and satisfaction. Compared with standard offices, employees experienced more uncontrolled interactions, higher levels of stress, and lower levels of concentration and motivation. When David Craig surveyed some thirty-eight thousand workers, he found that interruptions by colleagues were detrimental to productivity, and that the more senior the employee, the worse she fared.

The New Yorker piece followed on the high heels of several others from the likes of Fast Company, Inc., and Forbes, all of which cited the negative effects of open-office plans as well as the growing discontent among the nation’s workforce.

Which brings me to the memo I received earlier this morning. The memo, which is more manifesto than memo, did not contain a return address. However, it did come signed—by “The 70 Percent.”

And here, below, in its entirety, is said memo:

Dear Sirs and Madams and People who neither identity themselves as sirs nor madams,

We, the 70 percent, have had it with your gum cracking, your hand waving, your loud talking, your loud laughing, your goat curry splashing onto our keyboards and smartphones.

We’ve had it with your loud good-mornings, your loud good-nights, your louder Hey dudes you gotta check out this sick goal by Messi, your even louder OMG did you catch the mess of a dress JLaw was sporting to the Globes?

We can’t take one more of your sneezes, your coughs, your flu germs, your cold germs, your complaints about your head and the weather and your mother and your brother, or your feeble attempts at a surreptitious nose pick and subsequent flick.

We’ve had it with the footballs, the volleyballs, the tennis balls, the Frisbees, the Rock Star, the having to come into the office at 5 a.m. in order to get any sort of productive work done.

We’ve had it with your attempts to make eye contact with us while we type, the attempts to engage us with idle morning, midday, and midnight conversation while we work.

We’ve had it with the questions about which IG filter is best, which profile picture the cutest.

We don’t want to symbolically belong to your team. Or, for that matter, any team with more than 11 players a side. Do you see a number on the back of our blazers? An ad on the front of our sweaters?

In short, we, the 70 percent, demand the following:

Our offices back. A door we can close. A wall not made of glass. A place to hang a photograph. To listen to music and news and the odd podcast without earbuds jammed into our skulls. A little privacy. Peace and quiet. Time and space to think. An opportunity to quietly contemplate and quietly create. The ability to make a personal phone call outside the last stall in the women’s room. A neighbor who has to first knock rather than stand over us and scream Hey man, you got a minute?

In other words, we want what you want: Increased efficiency. Better ideas. Higher profits.

That is, four walls, two plants, and a tiny window to call our own.

Respectfully yours,
The 70 Percent

Read More:
The Open-Office Trap (The New Yorker)
The 10 Worst Things About Working in an Open-Office Environment (Fast Company)
Cube Life Is Killing Me (Vault)

Cube Life Is Killing Me

So say, more or less, several young investment bankers who've taken Vault's latest Banking Survey, which is being administered now to the top 75 investment banking firms across the country.

According to one such banker who's feeling his soul squeezed into oblivion due to the cramped and dreary cubicle-without-a-view office system, "This place is old and run down and very late '80s/early '90s.