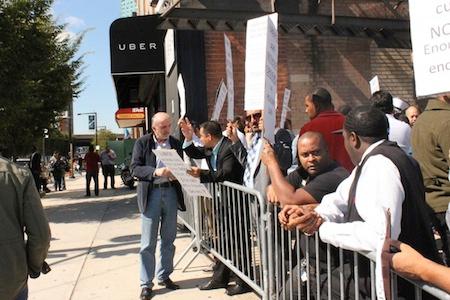 Today, nearly one in five jobs is performed by a part-time independent contractor or freelancer. That’s a 60 percent rise versus the number of jobs that part-timers held 15 years ago. This change in how we work has sometimes been referred to as the “gig economy.” And recently, it has also been referred to as the “Uberization” of the workplace, named after the ride sharing company Uber, which employs 4,000 full-timers and 156,000 part-timers—that is, only 2.5 percent of the people who rely on Uber for at least some of their earnings are full-time employees.

Although Uber the company is relatively young, the Uberization of work is nothing new. Uber, Lyft, Apple, and others certainly didn’t invent the gig economy; it’s been around for years. And, for better or worse, it seems to be here to stay.

Uber is not so much a labor-market innovation as the culmination of a generation-long trend. Even before the founding of the company in 2009, the United States economy was rapidly becoming an Uber economy writ large, with tens of millions of Americans involved in some form of freelancing, contracting, temping or outsourcing.

The decades-long shift to these more flexible workplace arrangements, the venture capitalist Nick Hanauer and the labor leader David Rolf argue in the latest issue of Democracy Journal, is a “transformation that promises new efficiencies and greater flexibility for ‘employers’ and ‘employees’ alike, but which threatens to undermine the very foundation upon which middle-class America was built.”

In other words, the Uberization of work is good for some, bad for others, and ugly for millions of middle class Americans.

Here’s one example of how it benefits workers.

A company called HourlyNerd, based in Boston, connects alumni of top business schools and other specialized programs to companies with projects in need of completing, like market analysis or examinations of pricing strategy. The most sought-after experts enjoy a steady stream of work, earn well into six figures and can winter in Buenos Aires if they choose.

“I had an offer from another consulting firm, but I wanted more flexibility with my life,” said Carlos Castelán, who started taking on HourlyNerd projects while still at Harvard Business School and now plans to build his career around the platform. “I can work from home, have more control of my schedule.”

Sure, winters in Argentina aren’t bad. But if you’re an older worker, with a family to support, you’re not going to be taking the kids On the Road in between gigs anytime soon. And you’re going to want some security, are you not?

The following example from one attorney underlines this worry of those trying to support a family in the gig economy:

Unlike many of their colleagues in the fast-growing legal outsourcing and temping market, lawyers who work for Axiom, one of the industry’s leading players, receive health insurance, paid time off, 401(k)’s and money comparable to what they would make at a traditional firm or corporation. Yet many live with the uncertainty of not knowing how long they will go between assignments, during which time they earn no income from the company.

“When I’m done with this job, it could be a month, two months” before another one, said a lawyer who worked for Axiom until 2013 and requested anonymity to avoid drawing attention to her current employer. “It was a stress point for me. My family depends on me.”

As for the ugly side of the gig economy, the middle class is shrinking while the concentration of wealth of the so-called 1 percent is rising. Which can be seen in the below NYT infographic, which shows shares of households by income range. (Note: middle income equals households earning between $35,000 and $100,000 per year.) 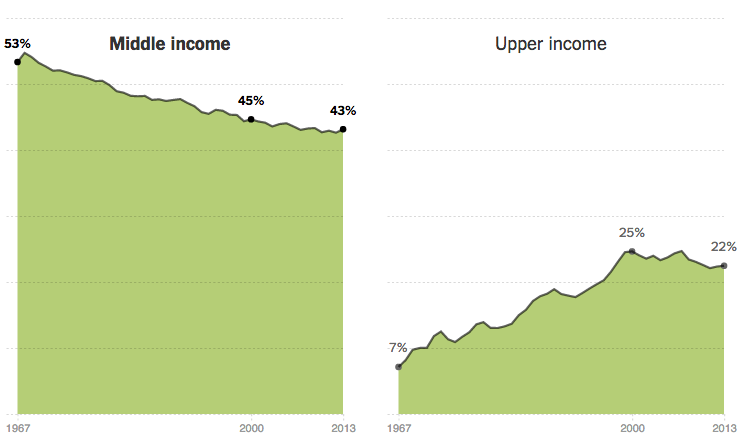 In fact, the above was part of the focus of one presidential candidate’s address to Americans earlier today.

In New York, at the New School, Hilary Clinton gave an economic address of sorts that set forth some of the economic issues she’d focus on if elected. She spoke about enacting stricter financial regulation for Wall Street, tightening the gender wage gap, and increasing the minimum wage. She also spoke about the disheartening fact that the middle class was shrinking, thus making it more difficult than ever to get ahead. And, yes, she mentioned the gig economy, too. Here’s part of the Atlantic’s take on Clinton’s speech:

She seemed content to split the difference on many of the issues themselves. She spoke warmly of the new opportunities the “gig economy”—her term—has created, but also worried about the lack of workplace protections. Later, she vowed to “crack down” on employers who “misclassify” workers as contractors to deprive them of benefits, which could equally be a dig at the real goods economy, like FedEx, or the new-tech economy, like Uber. (Unlike Jeb Bush, who plans to cite Uber as a model, Clinton didn’t mention the ride app by name.)

In any case, where do you stand on the issue? Does the Uberization of work present more solutions than problems to the modern worker? Is it better for our economy or worse? Do you typically dial up Uber or Lyft? Let me know in the comments below.

Read More:
3 Leadership Lessons From Obama's Talk With Marc Maron
Republican or Democrat: Which Way Does Your Industry Lean?
The One Job Robots Can’t Do (Yet)

Republican or Democrat: Which Way Does Your Industry Lean?