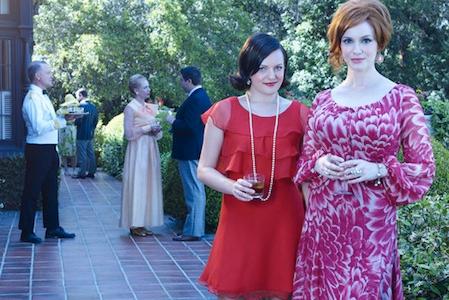 This Sunday, AMC’s Mad Men will begin its seven-episode farewell. It’s a sad time for Mad Men viewers. But it’s also an exciting time. Over the next two months, viewers will find out where their favorite Mad Men characters end up at the close of Matthew Weiner’s seven-act teleplay. And though much of the pre-finale focus has been on where ad man Don Draper will end up (dead or alive? in the ad game or out?), I’d argue that Mad Men has always been about its women—and it’s where Weiner places his female leads at the end of his masterful series that will leave the most lasting impression on the hearts and minds of the show’s faithful viewers.

Although Don Draper’s identity crisis has done a lot of the plot driving (and it’s been almost impossible to turn away from Jon Hamm’s sexed-up, boozy, charismatic performance as Draper), it’s been Weiner’s leading ladies who’ve suffered the most and gone through the most transformation. When Mad Man’s leading women reach the disco era at the end of May, they’ll have lived through a time of great civil rights oppression in America, but also a time of great change. And as the final credits role, they’ll have proven that women are as worthy of a Madison Avenue corner office as men, even if the men still deny it.

Here are a few of those leading ladies and why they’re so important to working women even after all these years:

1. Peggy Olson: the young exec on the rise

While watching the first episode of the first season of Mad Men, I remember thinking when Peggy Olson came on camera that she won’t last. That is, I figured the mousy, jumpy, timid secretary had two, maybe three episodes in her before she was fired—from the agency and the TV show. And maybe that was the point. Peggy Olson’s transformation from Don Draper’s secretary on that first episode into perhaps the leading ad person—man or woman—on Mad Men’s version of Madison Avenue is nothing short of miraculous. Olson will no doubt go down as one of the greatest, most human TV characters of all times, and Weiner and his team will be rightly hailed for performing an amazing piece of writing to get her from point A to point Z. Olson has navigated so many fascinating relationships and situations that are not only important to the women’s movement during Mad Men’s time but that also are still important today. She gave a child up for adoption while working. She had romantic relationships at work and outside of work that compromised her ability to work. She “lived in sin,” cohabitating with a significant other. She had contemptuous relationships with male bosses, female bosses, male colleagues, female colleagues. She was treated poorly at work because she was a woman. She was paid unfairly and not promoted for the same reason. She stood up to her bosses and asked for recognition as well as a fair wage. She was ostracized from her own family for her desire to pursue her career dreams. And yet she persevered through all—and was played so beautifully by Elizabeth Moss—that Olson has become a courageous reflection for all women who aspire to success in the workplace, which has historically been ruled over by men.

Will Joan and Roger end up together? Maybe. But that’s not as interesting to me as this question: Will the name “Harris” end up on the building? Sterling, Cooper and Harris has a nice ring to it, does it not? In any case, Joan’s rise to partner was a quick one—she ascended to that position in season five when she was shoved into a corner and had to make a choice. Yes, her partnership-getting was messy, but her hand was forced. In fact, Harris has had to endure so many sexually compromising situations in the workplace that you could probably make a drinking game out of it (drink every time someone makes a sexual remark to or harasses Harris). Perhaps above all else, Harris—played as a complex, strong yet vulnerable woman by Christina Hendricks—has embodied the exemplary employee. She works her tail off, cares about her employer’s success, and has proven that even if she doesn’t have the pedigree she can hang with the biggest ad men on the avenue. Harris’s story has been perhaps the saddest of all—with a baby in the mix, every decision becomes extra-charged, and every setback doesn’t just harm her but her child as well. She has also proven that the stereotype of the secretary wanting to marry the boss and head off into the suburban sunset for barefoot and pregnant Betty Crocker wonderland is a crock. Harris showed us that women without the good fortune of having the right education but with the right beauty that makes heads bob and swivel (men’s and women’s alike) are much deeper and capable of much more, including running her own agency.

Further destroying the stereotype of the secretary turned happy homemaker, Megan Draper was a latecomer to the series but quickly made her mark. She literally walked right into a Disneyland dream, bedding and wedding the leading man (Don), but soon discovered there was more to life than dancing in lingerie and singing en Francais for your significant other. Jessica Pate put a lot of angst and desire and sensuality in Megan Draper, and Weiner and team used Megan to great ends. Megan’s desire for a career of her own was a struggle, not just for herself but for her husband as well. These desires broke Don’s (and other men’s) assumptions of what women want. And Megan’s aspirations to become an actress underlined the difficulty of relationships between husband and wife when both have demanding careers. In the end, career trumped love (the marriage ended), and what Weiner, I believe, is saying through this choice of job over marriage is this: what satisfies a man can be exactly what satisfies a woman—meaningful work as well as meaningful home.

Of course, there are scores of other excellent Mad Men women such as Betty Draper/Francis, Trudy Campbell, Dawn Chambers, and perhaps the woman (well, girl) who stands to inherit the post-Mad Men world: Sally Draper, who'll be 15 years old when the series ends. And so, today, 45 years after the close of the 1960s, she'd be about 60 years old. Which is just about the perfect age to be the chief executive of one of the largest corporations on the planet.

The Best Countries for Women Managers

One of the biggest barriers to workplace equality for women is so commonplace that there's a convenient lexical shorthand for it. Utter the phrase "the glass ceiling" and almost anyone will know that you're referring to the paucity of female talent in executive positions at companies.

Face It, We're Cubed
Cube Life is Killing Me
The Revolution Against Open-Office Plans Has Begun
5 Ways to Stop Your Cubicle From Killing You
Dinr L8R PLZ XOXO ;) – Is it Appropriate to Send Personal Texts at Work?
What a Flexible Workplace Has to Do With Trust and Creativity (Inc.

Women in Tech: How to Avoid Burnout

When it comes to discrimination against women in the workplace, few industries have as big of an image problem as tech. As Hillary Clinton noted in a recent keynote speech, around one in five software developers and just one in ten executives in Silicon Valley are women.

Why Are Women in the US Less Likely to Work?

The issues of equal rights and pay for women in the workplace have been making headlines in recent weeks, along with the related issue of parental leave and benefits.

In the next few days, I'm going to be focusing on those issues in a series of posts examining Vault's Consulting Survey data from a gendered perspective, as well as taking a look at the life of a female employee who has struggled with the demands of the industry that has been at the center of much of the diversity debate of late: technology.