The State of the Union: Can Government Help America's Workers?

"We are a strong, tight-knit family who has made it through some very hard times."

The central theme of the domestic portion of President Obama's penultimate State of the Union speech last night was all about the progress the economy has made since the darkest days of the recession, coupled with a few ideas—most of which are unlikely to make it through Congress alive—about where to go from here.

The speech made a strong pitch for "middle class economics"—the idea that crafting economic policies tailored to the widest swath of Americans will help the economy to grow further. Among those policies: making affordable universal childcare a priority, raising wages, reforming sick pay and maternity leave, and making community college free.

Here are a couple of the job-related highlights:

"We believed we could reverse the tide of outsourcing, and draw new jobs to our shores. And over the past five years, our businesses have created more than 11 million new jobs."

According to BLS figures, peak pre-recession employment topped out at a little over 138 million jobs, before falling to 129.7 million in December 2009 and January 2010. It currently stands at 140 million. Here's what that looks like: 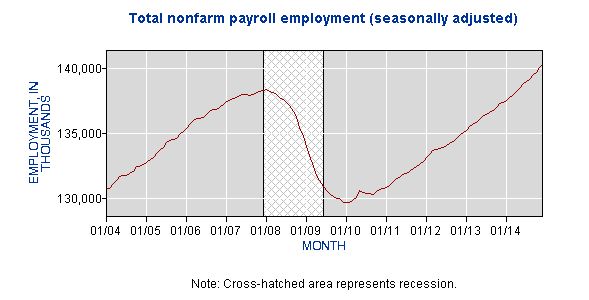 Whether or not you credit the administration's policies with the revival of the economy, that trend line from 2010 onwards is great news for all of us—and long may it continue.

"In today’s economy, when having both parents in the workforce is an economic necessity for many families, we need affordable, high-quality childcare more than ever. It’s not a nice-to-have?—?it’s a must-have. It’s time we stop treating childcare as a side issue, or a women’s issue, and treat it like the national economic priority that it is for all of us. And that’s why my plan will make quality childcare more available, and more affordable, for every middle-class and low-income family with young children in America?—?by creating more slots and a new tax cut of up to $3,000 per child, per year."

The math here is pretty simple for an average family: the Census department estimates that median household income in the US is around $52,000. The average cost of childcare: around $11,500 per child, annually. That has a fairly obvious negative effect: that parents at the lower end of the payscale perceive no economic benefit to participating in the workforce (i.e. they're only working to pay for daycare). And, given that women are still overwhelmingly likely to be the primary caregiver in households where only one parent is at work, the issue of economic equality comes into play—there's evidence that a substantial portion of the gender pay gap is attributable to the lost earnings and advancement opportunities when mothers take time out of the workforce.

With that in mind, there's much more at stake with childcare reform than simply giving parents a break.

It's no secret that wages have pretty much flatlined in recent years. As this chart from the EPI shows, even the most highly-educated workers in America have seen less than a 5 percent gain in average real wages since 2000, while those without a college degree are worse off. 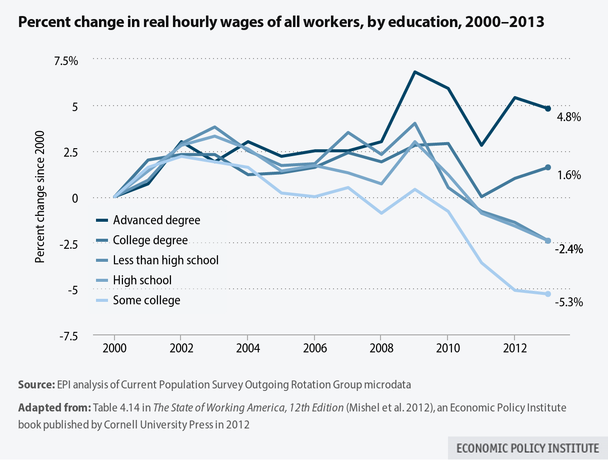 President Obama's proposed solutions in this speech were two-fold: an exhortation for states to raise the minimum wage, and pledge to make community college free. The first of those moves would, presumably, help to bend the light-blue lines upwards, while the second would allow people to move into different categories altogether.

With the minimum wage proving to be one of the most divisive issues in Washington, there doesn't seem to be much point in holding out hope for a salary bump to sweep the nation anytime soon. But with employers across America still bemoaning the lack of skills in the hiring market, the community college initiative has more potential to move the needle—assuming, of course, that it has any shot at all of making it through Congress.

What's your take on the ideas in the SOTU speech? Let us know in the comments section below.

Do you have an office crush? Have you ever been romantically involved with a coworker?

Are Unions Making a Comeback?

The past couple of days have brought a rash of headlines about union victories at the National Labor Relations Board—most of which are based on decisions that the NLRB has made that theoretically make it easier for workers to form unions. And most of those articles have been accompanied by quotes from individuals and lobbyists on either side of the debate, touting the rulings either as spelling certain doom for businesses or a jolt in the arm for workers' rights.

Pay Inequality is Real, and Other Lessons from the Sony Data Hack

If you've been paying attention to the news in the past few days, you'll likely have heard something about a data security breach at Sony Pictures—not least because the hack has resulted in several of Sony's current and upcoming movie titles being leaked onto the internet, potentially costing the company millions of dollars in lost revenue.

As bad as that may seem, the full extent of the data involved in the hack is still not apparent, and the worst effects of it may not even be revenue related.

It’s totally normal to be intimidated by a job interview.

Next week, Firsthand will be hosting its second annual Women in STEM Virtual Career Fair. The fair will provide women studying science, technology, engineering, or math or already in STEM roles with the opportunity to meet with employers, find new and exciting jobs, learn career lessons, expand their professional networks, and engage with event sponsors.

With the U.S. economy cooling off and some economists predicting that a recession could be imminent, you might be worrying about job security, wondering if you’ll soon be called into HR and let go in a company downsizing.