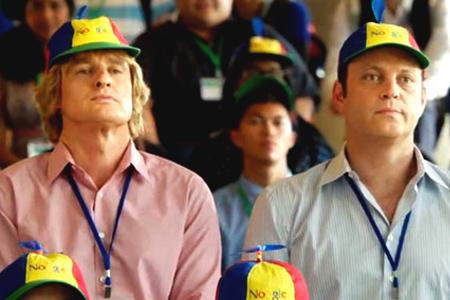 In a recent interview with online arts and political magazine Guernica, George Packer, a staff writer for The New Yorker, talks about his latest book, The Unwinding: An Inner History of the New America, which was published earlier this year and was inspired, in part, by "the failure of Wall Street, the failure of Washington, [and] the bottoming out of the economy." Here's how Guernica describes the book:

As a work of history, the “unwinding” refers to a protracted process of ideological decay, moving from the relative assurances of the 1960s and 1970s that jobs awaited high school and college grads to a present culture that wantonly foists or withholds its rewards. Assembled as a series of profiles through history that span Silicon Valley, Washington, Wall Street, and the heartlands, the work covers the likes of Oprah, venture capital giants like Peter Thiel, and "ordinary" Americans like the Hartzells, a family staggering their way through the modern economy between bouts of near homelessness, unemployment, medical bills, and chronic demoralization.

In the interview, Packer cites several interesting things about the writing of Unwinding, and I want to point to two of them here.

The first has to do with how taboos and norms have changed in the past three to four decades (the time span Packer covers in his book) and how they affect the modern workplace. According to Packer:

In the 1970s a CEO would unthinkingly have an affair with his secretary and would crack an ethnic joke or use a racial slur. He would not lay off 20 percent of the workforce while the board gave him a big pay raise, because that violated a norm. It wasn’t written anywhere, there was no law saying here’s the limit to what the difference between what CEO and average worker pay can be, but it was kept relatively low because that kept the peace ... But now that’s gone. The affair would get him in trouble; the racial slur would probably get him fired. But he’s rewarded for trashing his workforce. It’s considered a good move by Wall Street.

And, of course, the spread between what Mr. CEO makes on an annual basis versus the rest of his company's employees has widened from the width of a river to that of an ocean.

It should also be pointed out that I don't think Packer is exaggerating in the least. While we've certainly come a long way socially in a short time, and it's no doubt a sign of progress that ethnic jokes and slurs aren't tolerated as much as they were in the near past, it's also extremely troublesome that, today, putting people out of work is seen as a smart business move and CEOs (and other managers) are given strong pats on the back plus handsome salary hikes when they can trim even the slightest amount off the so-called bottom line. That is, shareholder interest has become king at the expense of job creation, the unemployment rate, and the creation of a strong middle class.

The second thing, which is not unrelated, is an answer of Packer's that comes near the close of the interview (note: Packer grew up in Silicon Valley and so knows the area well):

What I saw out there was Silicon Valley was dangerously close to a decadent stage where we’re no longer solving important problems or discovering important things that will fundamentally change our lives for the better. It’s like Wall Street and Washington: people go to cash out, divorced from their ostensible functions. Wall Street was supposed to provide credit to the economy. Washington was supposed to provide sensible legislation and representation, and Silicon Valley is supposed to create engineering products that change lives, and I don’t see that happening in a very persuasive scale anymore. They’re all mimicking each other in their decadence.

In other words, the so-called innovation of Silicon Valley = the greed of Wall Street = the self-interest of Washington. Which, at a glance, appears to be sadly true. Aren't the same MBA types who formerly donned suspenders and pinstripes and were treated to monstrous bonus checks and ridiculous perks like free rides anywhere and everywhere and dinners at Le Cirque now donning custom-made buttoned-downs and making craploads in stock options and being treated to ridiculous perks like massages at work and all the organic food-truck food they can ingest in under an hour? And how different, after all, is taking both sides in a suprime mortgage deal behind the back of one of your so-called clients from surreptitiously selling every last personal detail of one of your so-called users?

And so, while the greed and hubris of Wall Street should most definitely be continued to be brought to light in the hopes that someday, in addition to paying billions and billions in fines (like JPMorgan is slated to do in the coming days), someone in big banking will finally be put behind bars, we should not forget that many firms in Silicon Valley might not be all that dissimilar, at their cores, from those on Wall Street. Which is to say, in some cases, firms in the Valley are engaging in dubious dealings, are not providing much, if any social good to the community at large, are spending millions upon millions to lobby Washington for laws that will benefit them and them alone, and the mentality and drive of their employees are very similar to their counterparts on Wall Street.

Just over a handful of years ago, working on Wall Street carried nearly unmatched prestige for undergraduate and MBA students. It was widely accepted that only the best and brightest from the top schools in the country were admitted into skyscrapers housing the likes of Goldman Sachs, Morgan Stanley, Merrill Lynch, and a defunct firm formerly known as Lehman Brothers.