How to Be Mindful at Work Without Meditation 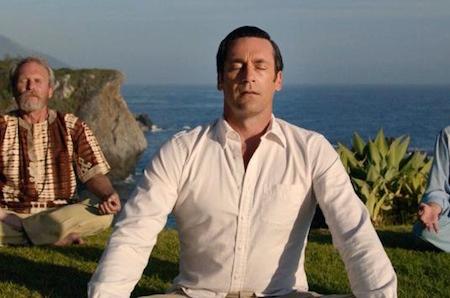 Before we get into how to be mindful without meditation, let's see how mindful you currently are with a little test. The below comes from Matthew E. May, the author of Winning the Brain Game: Fixing the 7 Fatal Flaws of Thinking. May, whose new book will be available at the end of May, recently wrote an enlightening New York Times piece on the subject of mindfulness in advance of Winning the Brain Game's release.

… imagine that the numbers in the incorrect Roman numeral equation below are movable sticks. Leaving the plus and equals signs as they are, what is the least number of sticks you would have to move to correct the equation?

Most people react immediately with an answer of “one.” But that is a mindless answer, based on knowledge acquired long ago. The optimal answer would be “zero,” arrived at by looking at the problem from an alternative perspective. By looking at the problem upside down, you could read the equation literally right to left, so that X (10) = I (one) plus IX (nine). Or you might recognize the visual symmetry, and reflect it in a mirror. By noticing different ways to view the problem, you move from mindless to mindful.

I confess: my answer to the above was mindless; I immediately thought "one," as May notes. In any case, what May wants to get across is that mindfulness at work does not mean we have to go to India and learn how to fold our legs into lotus position and enjoin our index fingertips to the tips of our thumbs and chant Om until we empty out our monkey minds of all thoughts. Quite the contrary. Here is how May describes mindfulness (a description which I rather like) and compares it to mediation (which is a practice of, defined simply by May, "quieting the mind and suspending thought"):

Mindfulness is a higher-order attention that involves noticing changes around us and fully experiencing them in real time. This puts us in the present, aware and responsive, making everything fresh and new again.

Meditation is simply one of several tools for achieving mindfulness, and in the context of work it may not be the most suitable for many people. For those who, like me, can’t seem to get the hang of meditation, there is good news: You don’t have to meditate to become more mindful.

This is indeed good news for those who find it difficult to meditate, or for those who don't like the word or idea of meditation. Because while meditation isn't essential to succeeding at work, being mindful (not being mindless) is.

As for how, specifically, to be mindful without sitting in zazen, that is, how to be in the present, how to look at problems in a new way, here is what May suggests:

The most effective technique I’ve found for moving from mindless to mindful without meditation involves a form of self-distancing, and talking to yourself as an objective adviser would. It is achievable in a few simple steps.

Suppose you’re facing a situation that’s causing you stress—perhaps a change at work, a tough problem or an important decision. The first step is to realize that you’ve already made two unwarranted assumptions: that something will happen, and it will be bad. Next, give yourself three reasons the issue you’re worried about might not happen. Notice that it immediately becomes less stressful, because you just went from “it’s going to happen” to “maybe it will happen, maybe it won’t.”

A concrete example comes to mind. A few years ago, a friend who works at a major women's magazine was asked out to lunch by a very high-ranking editor at the magazine. My friend had been working for the magazine for about six months, had been sort of struggling to keep up with the workload (or so she told me) and had been doing not the best job (or so she said) and so she assumed that this high-ranking editor was asking her to lunch to let her go. That is, to fire her.

My friend called me in a panic to tell me all this. And, after hearing her out, I asked her: "Do you think it's possible that lunch could just be lunch?" That is, I wondered if the editor had no other motive than to get to know my friend, to go out to lunch with her. My friend and I also spoke about the (outside) possibility that the editor was really asking her to lunch to tell her she wasn't doing a great job and/or to fire her. "You'll find another job," I told my friend, "which might not be so bad because you're not loving this one."

In the end, lunch was indeed just lunch, nothing more. But my friend had stressed herself out for nearly all of her waking 72 hours between the time of the invitation and the lunch. (And now, of course, "lunch is lunch" is a running joke between us whenever either of us begins to make unwarranted assumptions about something, causing unnecessary stress.)

The point is, as May notes, most of our stress comes from making assumptions. We think we know, we think we've seen this situation before, we think we know what the outcome will look like. And so we get all worked up, focusing on the past and on the future, while forgetting that the present situation and challenge is unique and we might not have any clue how it will go. In other words, being mindful is making sure we're looking at each situation anew, from a new angle. It doesn't mean having no thoughts, or a clear mind (though that can't hurt). The truth is every problem that faces us, every work (or other) challenge is unique. Similarities exist, sure. But nothing is exactly the same.

What also comes to mind is that, although meditation is not necessary to be mindful, I wouldn't go throwing out the idea altogether just yet. It's still one of the better exercises (I like to think of meditation as an exercise, not unlike running or lifting weights) for getting to a mindful state. And if the word meditation is not to your liking, try one of these: "sitting" (this is basically what you're doing when you "meditate"; you sit quietly and just follow your breathing) or "sensing" (what you're also doing mainly when "meditating" is engaging many of your five senses and this engaging of your senses prevents the imaginary voices in our heads from talking as frequently or loudly as they typically do).

Lastly, what comes to mind is the late Prince Rogers Nelson, the man more commonly known as Prince, who died this past Thursday (and who now, posthumously, has the No. 1 and No. 2 records on the Billboard 200 Album Chart). According to Jimmy Jam, "a longtime associate of Prince and a former chairman of ... the organization that presents the Grammy Awards," Prince (who was nominated for 37 Grammys and won 7) always looked at musical problems and music business-related problems from, to use May's words, an alternative perspective. In other words, mindfully.

"If you ever gave him an answer that had anything to do with 'because that's the way we have always done it,' that was absolutely the wrong answer to give to Prince," Jimmy Jam said. "It was, 'Why can't we do it a different way? Why can't we do it better?'"

Read More:
Mindfulness Training Tips Google, Nike, and Microsoft Use
Wall Street's First CHO (Chief Health Officer) and the Benefits of Leaving Work at 7
Is the Constant Connection to Our Jobs Melting Our Children’s Minds?

The alarm goes off at 7 a.m. and the first thing I think of is coffee.

Here’s a scene you can witness at any number of New York City restaurants any night of the week: A mother sits down with her two young kids, and before menus are brought out, the mother hands the kids matching iPads. The kids then proceed to play video games through their entire meal, looking up just once or twice from their respective screens, only to drink some water or fill their mouths with food they're too busy to taste.