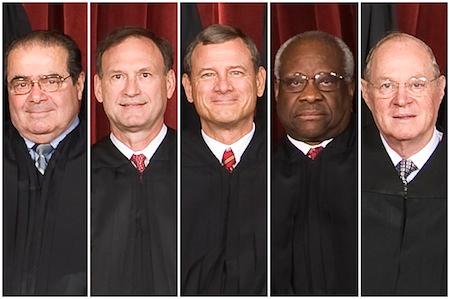 One of the wildest developments in this very wild election year has been the death of Supreme Court Justice Antonin Scalia. And the question Who will succeed him? is one that's looking more and more like it will be heatedly debated right up until the final vote is cast on the first Tuesday this November. Of course, the importance of Scalia's successor is far reaching. With the SCOTUS now locked at 4 vs. 4 (four conservatives and four liberals), the person to take Scalia's place will likely hold the decisive vote in numerous cases brought before the court. Not to mention could determine if a case is brought before the court (four judges' votes are need to do that). And areas in which Scalia's successor's vote will play prominently include those involving corporations and, specifically, how they treat their employees.

… overturned long-standing antitrust restrictions. It has limited liability for corporate fraud and made it harder for workers to successfully sue for age and gender discrimination. It has made suing businesses and governments more difficult, especially in class-action suits.

And citing Brian Fitzpatrick, a law professor at Vanderbilt who clerked for Scalia, Surowiecki writes:

Here's Bloomberg on the topic:

Scalia’s death is likely to make it harder for companies to get the five votes they need to overturn awards or get new restrictions on class actions. He had been a key voice for companies in challenging group suits at the Supreme Court.

Scalia wrote the 5-4 ruling in 2011 that said Wal-Mart Stores Inc. couldn’t be sued by potentially a million female workers. Two years later, Scalia was the author of a 5-4 ruling that freed Comcast Corp. from having to defend against an $875 million antitrust lawsuit on behalf of Philadelphia-area customers.

As for that Wal-Mart ruling, it involved six women who, on behalf of 1.5 million other women and under Title VII of the Civil Rights Act of 1964, sued Wal-Mart, claiming that the firm favored men when it came to promotions and raises. They provided evidence that "women's pay lagged that of men in every major job in each of the company's 41 regions and that although women made up more than 80% of hourly supervisors, they held only one-third of store management jobs." Ultimately, the Supreme Court ruled that the case had no merit.

"In a company of Wal-Mart's size and geographical scope, it is quite unbelievable that all managers would exercise their discretion in a common way without some common direction," [Scalia] said, noting that Wal-Mart operates 3,400 stores. The women "attempt to make that showing by means of statistical and anecdotal evidence, but … their evidence falls far short."

It's also quite unbelievable that hundreds and hundreds of American companies (in tech, finance, and other industries) can't seem to figure out how to hire, retain, and promote women. Not to mention treat them fairly on a daily basis. In other words, just because it's quite unbelievable doesn't mean it isn't true.

In any case, Bloomberg also cites other experts who believe Scalia's death might have little effect on class-actions. And Surowiecki points out:

There's no guarantee that his death will change things. But many of the Roberts Court’s most important business cases were decided by a 5–4 margin, with the five conservative Justices voting as a bloc. And, as Fitzpatrick points out, “Scalia has done more than any other justice in making it difficult for consumers and employees to bring class-action suits. So his absence alone may make a difference.”

As for that absence, it's already made a difference in one big case. This week, Dow Chemical settled a class-action price-fixing lawsuit for $835 million, rather than fight it, or wait to fight it. In a press release, the firm said, “Growing political uncertainties due to recent events with the Supreme Court and increased likelihood for unfavorable outcomes for business involved in class-action suits have changed Dow’s risk assessment of the situation."

In any case, it'll be interesting to see, along with which side of the aisle the new justice sits, which era and type of music he or she will draw upon when writing up his or her rulings. As was pointed out by the Times in the wake of Scalia's death, the late justice was an avid opera fan, and didn't shy away from including a Bob Dylan lyric or two in his rulings. And apparently other justices have looked to Springsteen, Billy Joel, and even Tommy "876-5309" Tutone for inspiration. And so, I, for one, am hoping our next justice has more than a little love for this former Fleet Fox.

Read More:
Is Yahoo's Performance Review System Illegal as Well as Morale-Crushing?
The One Thing Cruz, Rubio, Clinton, and Sanders Agree On: Wall Street Stinks
What Is a 'Superboss' and Why Is Donald Trump Not One?

The One Thing Cruz, Rubio, Clinton, and Sanders Agree On: Wall Street Stinks