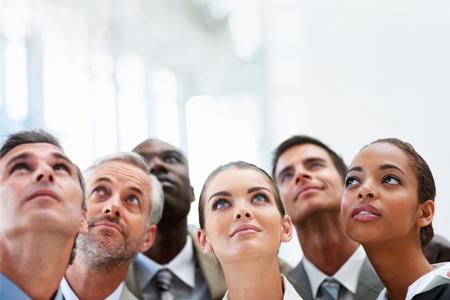 Many people consider success a result of outside circumstances—but working with what's right in front of you, it's possible to make a huge difference by adjusting your perceptions, and eventually, behaviors.

It may seem like a small part of the puzzle, but thoughts you don't even realize you're having can have a profound domino effect on your self esteem, job performance, and overall professional trajectory.

Here's what to (re)consider:

Employers never hire people they don't know. Networking events are a huge waste of time. Job interviews are pointless because you get nervous and never make a good enough impression.

Do any of these thoughts sound familiar?

Do any of these thoughts sound helpful?

We have millions of cognitions every day—so many that it may not even occur to us realize that we're having them, let alone wonder if they could be ruining our moods or killing our motivation.

It's normal to feel frustration in the face of adversity, whether it's in a tough job hunt or a stagnant working environment. But, with many conditions out of your control in these situations, it's important to get a handle on how these circumstances effect your mental and emotional fortitude.

A deeply held belief that job boards are useless, for example, might be preventing you from applying as much as you should; an inkling that your boss never notices your work could be causing you to slack off.

Awareness is the first step—the second is actively correcting yourself. Actively reminding yourself of "goal-oriented" ideas like, "Something's got to give if I just keep trying," or, "I should always do my best—you never know when someone important will notice" should keep you on the right track.

Imagine that two people get into a fender bender. Both are understandably shaken up, and one has become much more alert on the road, more aware than ever that accidents can and do happen.

The other person, though, becomes convinced that driving is much too dangerous, and won't get behind the wheel. He takes the bus or insists on carpooling, which is inconvenient and time consuming. His whole life is turned upside down because of a fear of an outcome that's extremely unlikely: another accident, despite his otherwise spotless driving record.

We've all been burned by bad work experiences: maybe you heard a coworker snicker during a presentation, or the last time you led a team, you group missed a deadline. That doesn't mean you should avoid public speaking or leadership for the rest of your career. But, without knowing it, your fear may be holding you back just that way: by nudging you to avoid, to procrastinate when certain capacities of your job are involved.

The best way to fight back is to actively argue with your fear. You might ask yourself what the odds of similar bad luck are. Or you might question whether someone disliking your presentation is really the worst thing that could happen to you--worth holding back your career over. Anything to recalibrate your thought patterns from "skewed" to "reasonable" by shaking up your beliefs (public speaking is scary; I can't lead a team) is good for your ability to grow and thrive as an employee.

It's sometimes easier for us, in this very complicated world, to slap a singular, easy-to-understand label on difficult people or situations. Your boss lost his temper on you? He's a jerk. Your colleague texts throughout the day? Useless and lazy.

The trouble is, holding "label" beliefs about the people around you every day is draining, and does little to resolve the issue at hand. In fact, it can perpetuate it: having the belief that someone's rude and annoying, for instance, might cause you to treat them coldly, only reinforcing their tendency to be rude around you and worsening the tension.

Instead, catch yourself condemning the people around you and scale back your judgements from the people to their actions. Their behavior might be harsh, or rude, or annoying—but is the person on a whole that bad? Chances are, there's always more going on than meets the eye. Adjusting your perceptions this way can help you let go of any resentment that might be distracting you on the job, and hurting your work relationships.

4. Check black and white thinking at the door

When you make a mistake at work, or misread a social situation, what do you tell yourself about the event? "Whoops, that was a silly thing I did!" or "God, I'm such an idiot, why did they even hire me?"

While it's appropriate and even beneficial to take notice of when you've made a mistake, acted inconsiderately, or prioritized poorly, feeling hopeless or like a failure is not. That's where black and white thinking leads: I made a mistake: I must be incompetent. I did something selfish: I must be a bad person. I took a risk that didn't pay off—my track record is ruined forever.

The worst part of feeling this way, aside from the unnecessary emotional distress, is that it can be a self-fulfilling prophesy. If you feel like a worthless, lazy loser, it's very difficult to act like a strong, productive winner. And the resulting poor performance could lead your boss to believe you're really not up to par.

Instead, judge the action, not yourself, and make a plan for correcting it. Then move on. Everyone is allowed to make mistakes, and not earn a "label."

Petrified of turning in that proposal because it's not quite perfect? Thinking of bowing out of the work party because you're sure you'll have no one to talk to? Shake up your belief system by flying in the face of your fears. Allow yourself to give a document one good proofread before letting your boss take a peek instead of agonizing for hours;  go to your Happy Hour without a friend as a "buffer."

Chances are, things will go just fine. And if they don't? Avoid "awfulizing" any negative outcomes with a little perspective. Did anyone die? Are you likely to remember this incident 5 years from now?

Things not going perfectly is not a catastrophic event. Living your life held back by fear, though? That's a downright tragedy.

Read more:
Change Your Thinking: Overcome Stress, Anxiety, and Depression, and Improve Your Life with CBT
How to Use Twitter Without Getting Fired
Death of BofA Intern Shines Brighter Light on Killer Workweeks