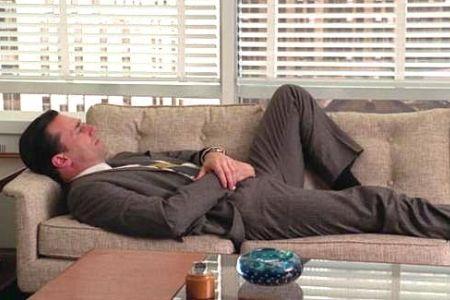 "I often refer to the series Mad Men, taking place in the ’60s, where they’re drinking and smoking in the office. And you think, 'What are you doing? You’re at work!' But we’re doing the exact same thing right now. We’re showing up just as bad, in terms of performance. We’re not nearly having as much fun, though."

That quote, from McKinsey specialist Els van der Helm in a recent McKinsey podcast, suggests that there's an epidemic of poor behavior that is afflicting workers in this day and age, lowering productivity and leading to some seriously bad decision-making. Any guesses what it is?

Unlike in the era portrayed in Mad Men, it's nothing to do with traditional vices such as alcohol, nicotine, sex or drugs. Nope: it's sleep—or more precisely the lack of it—which is afflicting companies in this generation. As van der Helm notes, that's not nearly as much fun as Don Draper's real-world counterparts got to have, especially with work-related activities being one of the main reasons that current generations are sleeping so much less.

That quote aside, the most interesting piece of the podcast is the fact that the three guests—all of whom are McKinsey alums, itself a firm that is well-known as being a place where high levels of pressure are heaped on employees—discuss perceptions of effort by others as a key factor behind the tendency to work longer hours than may be healthy or productive.

In the kind of winner-takes-all environments we see in many workplaces, it makes sense: the person who seems most committed to the job, and the company, is the one that is most likely to be rewarded with choice projects, promotions, and pay raises. And an easy way to display your commitment is to be the person who is always available, staying in the office and/or responding to emails at all hours. Which is fine, right up to the point where the lifestyle starts impacting your ability to do the job properly.

Disappointingly, despite all of our advances in areas such technology, corporate wellness, governance and the like, it seems that we're a long way off of any kind of ideological shift as regards this aspect of productivity. Listen to the podcast carefully, and you'll note that the majority of the solutions proposed are for individuals: not checking your phone at night; meditation; "investing in" sleep as part of your productivity.

The closest we get to a sense that mindfulness is something that could emerge at the heart of more organizations is a snippet from Caroline Webb, another McKinsey alum who featured in the episode and discussed the growing body of empirical research that indicates that sustained sleep deprivation has tangible impact on cognitive function. As Webb notes, "In data-driven, evidence-hungry, senior people who need to know that there’s a real reason for shifting behavior, the scientific evidence really helps."

As far away as a wholesale shift in acceptance on mindfulness seems, that mounting evidence is one of the best hopes we have for a rebalancing of the ever-diminishing boundaries between work and life.

What's your take on mindfulness and sleep deprivation? Is it a genuine issue facing companies? Do you have any tips on how to deal with the balance? Share your thoughts in the comments below, or find me on Twitter: @vaultconsult

A Day in the Life of a Medium Employee

The online platform bent on getting you to read again took the world by storm when it launched in 2012. Now, with an office in NYC and its headquarters in San Francisco, Medium is growing exponentially as readers and writers flock to the site.

When I think of customer service, a department store register or the counter at a fast food restaurant usually comes to mind. While these are certainly archetypes of the quintessential business/customer interaction, customer service goes far beyond retail — it seeps into every industry, public or private, no matter the transaction type or parties involved.