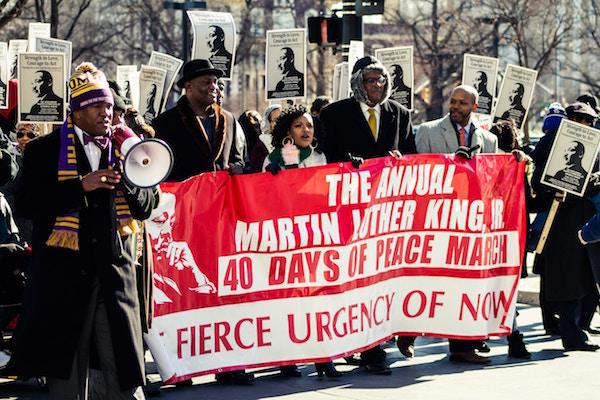 Black History Month rarely gets the attention it deserves. Too often, February comes and goes without companies and their employees spending much, if any, time celebrating this essential piece of America's history. And so, to take matters into your own hands, below I offer a place to start when it comes to venturing out on your own to school yourself in this often harrowing but ultimately enlightening part of U.S. history. As a side note, I promise that if you do "do" the below, you'll not only come away as more informed but also more empathetic, and thus, perhaps, a more understanding colleague and manager. You might also come away inspired to go out and create some U.S. history of your own.

Lewis is also perhaps one of the most eloquent, inspiring speakers you'll ever come across. And so it's a huge treat that you're able to hear him speak his mind and talk about his experiences in a 2015 On Being podcast entitled "The Art & Discipline of Nonviolence" that recently re-aired on NPR. In it, Lewis talks about the pivotal protests that he and King and others attended and, more specifically, how they prepared for those protests. In other words, Lewis gives us a master class in nonviolent protesting, lessons that can be used and studied right now in cities and states nationwide.

In one of the many moving parts of the podcast, Lewis talks about how he and others, before they went on their history-altering marches, studied Gandhi, Thoreau, and the "great religions of the world." They also went through play-acting exercises, practicing for the insults and beatings they were sure to endure. Here's a little more about what Lewis and others did to prepare for their protests:

We went through the motion of someone harassing you, calling you out of your name, pulling you out of your seat, pulling your chair from under you, someone kicking you or pretending to spit on you. Sometimes we did pour cold water on someone, never hot—but we went through the motion … of saying that if someone kicks you, spits on you, pulls you off the lunch counter stool, continue to make eye contact. Continue to give the impression, yes, you may beat me, but I’m human …

The movement created what I like to call a nonviolent revolution. It was love at its best. It’s one of the highest form of love. That you beat me, you arrest me, you take me to jail, you almost kill me, but in spite of that, I’m going to still love you. I know Dr. King used to joke sometime and say things like, “Just love the hell outta everybody. Just love ’em.”

Although you might not have too much love for O.J. Simpson after seeing Ezra Edelman's mind-blowing and masterful five-part documentary (which is all but a lock to win an Academy Award in a few weeks), you will come away with a brand new understanding of the part that Simpson and the Trial of the Century play in the history of the U.S., not to mention the part that U.S. history played on Simpson and his 1995 trial.

It's not for nothing that this documentary was on all three of the New York Times film critics' "10 Best Movies of 2016" lists. Perhaps the Times' A.O. Scott put it best when he wrote that the film "touches on nearly everything horrible and fascinating in the last half-century of American life" and is "a rare documentary with the heft and sprawl of great literature."

Each part of Edelman's film is approximately 90 minutes long, and I recommend you digest just one episode a day. But if you really can't wait (it certainly is as compelling and "page-turning" as many of the best dramatic series on TV today), then go ahead and watch two a day. The reason I recommend that you limit your intake is that there's just so much to take in and ponder in the film (so many facts and figures and twists and turns and side stories that lead to more questions, not more answers) that a binge will not do this once-in-a-lifetime film justice.

The title of this documentary film (also up for an Academy Award) takes its name from the 13th Amendment of the U.S. Constitution, an amendment that abolishes slavery in all cases but one: if a citizen has been incarcerated. Indeed, for those who've committed a crime, involuntary servitude is anything but illegal.

"13th," directed by Ava DuVernay, who also directed the 2014 film "Selma," lays its cards down early with one of the more inconvenient facts I've seen in any film in recent history: The U.S. has 5 percent of the world's population and 25 percent of the world's incarcerated population. In other words, one in four people in jail on the planet live in the United States. Let that sink in for a minute … Right, it doesn't get any more problematic than that. And there are no alternative facts that can be presented to begin to support anything other than this fact: that this incarceration rate is a major, major problem, and a major blemish on U.S. history. And, as it turns out, it's a problem of race, a problem rooted in slavery. Today, 38 percent of the incarcerated individuals in the U.S. are African-American.

Since DuVernay's film largely employs talking heads and facts and figures playing over the talking heads, it plays very well on small screens (your smartphone). And it's just over 90 minutes long so it could conceivably be watched in a single workday: first half during the morning commute, second during the evening.

The first time I saw and heard the great African-American novelist, memoirist, and short story writer John Edgar Wideman read, he was wearing black Nikes, black jeans, and a black Pittsburgh Steelers jersey. Immediately, I knew Wideman was no ordinary MacArthur Genius. And indeed, I soon discovered that Wideman doesn't mess around; he doesn't simply aim to entertain. In fact, the reason why Wideman writes—which he passed along to the crowd of listeners on that day more than a decade ago I first encountered him, and what he passes along again in a recent podcast in which he reads from his new book, Writing to Save a Life: The Louis Till File—is not to show what he knows, not to pass along any knowledge, but to discover what he thinks about certain topics. And those topics are always of great importance.

In the past, they've included life in segregated Pittsburgh (where Wideman grew up), the 1985 bombing of a black cult's headquarters in Philadelphia that killed 11 people, and his own son's life sentence for murder. As for Wideman's latest topic of discovery, or at least his jumping off point, it's the case of Emmitt Till, the 15-year-old African-American boy who was brutally murdered in Mississippi in 1955 for allegedly whistling at a white woman. Wideman discovers in his research that Emmitt, who became a martyr for the Civil Rights Movement, had a father who seemed to have been treated just as unfairly as his son. According to Wideman, Louis Till, a black soldier in World War II, was hanged in Italy for a rape and murder only because he was "the wrong color in the wrong place at the wrong time.”

If Wideman's latest work sounds a bit too heavy for a starting point into his writing, I can't recommend highly enough Wideman's powerful, inventive story collection Fever. One of the standout stories from that collection is one of my favorite pieces of Wideman's writing. The story's called "Doc's Story," and it focuses on a standout—and blind—African-American basketball player. Not incidentally, Wideman himself was quite a player in his day. He was a scholar-athlete at Penn, where he captained the school's basketball team, and if I'm not mistaken, I once heard Wideman say that if he were a little taller, he might've made the NBA.

Why Facebook's Diversity Hiring Efforts Have Not Gone As Planned

Not long ago Facebook, which has received more than a little flak for its largely white and Asian male workforce, took on its lack of diversity head-on and created a new recruiting initiative aimed at beefing up its minority and female employee base. That was two years ago.

7 Great Nonprofits to Work For

At the end of each year, people often reflect on how the past 12 months have shaped them and their lives, thinking about what has changed and what has improved. Many also reflect on what they can do differently in the coming year.

Last week, the New York Times highlighted a recent study conducted by two psychologists from the New School that apparently proves that reading literary fiction can help you become a better interviewee.

Say you are getting ready for a blind date or a job interview.