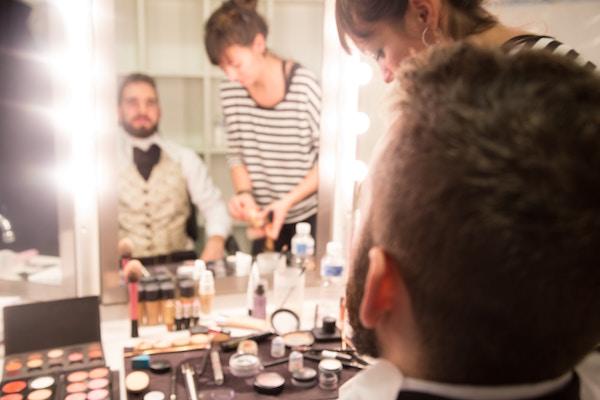 You know that making a good first impression is important, and especially important in business meetings. But you might not know how to make that good impression to get those meetings off to a good start. Which is where actors can help. Actors, who could be said to be professional first-impression makers, constantly use their faces and bodies to make strong initial impressions in auditions, on stage, and on film. And so, here, below, culled from a recent Wall Street Journal article, are some helpful tips from former actors turned business leaders on how to make great first impressions in work meetings.

1. Wear a pleasant face, stand up straight, keep your distance.

"Facial expressions are important even when you think no one is looking," according to Judson Vaughn, a former character actor turned CEO of First Impressions, an impression-management consulting firm. "People tend to distrust others whose 'dominant face,' or habitual expression, is grumpy, disapproving or angry."

Vaughn, who used to lose parts while an actor because of his unpleasant and lazy facial expressions in auditions, "began adapting his facial expression, body language and stance the moment he entered the room to suit the role he wanted." As a result, "Vaughn landed more roles as a trustworthy good guy by wearing a pleasant expression that warmed to a smile when he faced the director, shoulders erect, at a respectful distance." (He also landed more bad-guy roles by putting on an unpleasant face when auditioning for those.)

And so, when you're meeting someone in the workplace, remember Vaughn's auditioning tactics and smile, stand up straight, and don't crowd the person you're meeting with. An added tip from Vaughn is "leaning or turning toward the other person to show you’re focused intently on what he or she is thinking and feeling."

According to Lisa Peers, an actor and CEO of a workplace-communication training firm called Peers & Players, "That first entrance in the room is the same as that first entrance of your character on stage." And so, Peers tells clients to "prepare themselves mentally to impress new acquaintances by pausing for a few moments beforehand to think about what they want to accomplish with the other person." Peers also recommends that her clients use breathing techniques in order to relax themselves and get more confident before a meeting. And she advises to aim for "symmetry in your stance, with your shoulders straight and even."

Perhaps the most important thing to remember from Peers' advice is to give yourself time to prepare before a meeting, before you know you're going to be making a first impression. In other words, don't schedule meetings when you know you won't have at least five or maybe even 10 minutes to prepare. Just like you would before auditioning, you need to collect, calm, and ready yourself before meetings, especially when they involve someone you've never met before.

Whenever Hilary Blair, an actor and CEO of the communications-coaching firm Articulate Real & Clear, meets someone new she makes sure that other person can see her hands. That is, "she stands with her hands relaxed and visible at her side, rather than hidden in her pockets or crossed defensively in front of her." Blair says, "This suggests that your warm greeting is genuine and you have no secret agenda or need to protect yourself."

You can take Blair's advice further and also remember to unfold your arms, uncross your legs, and don't hunch. This will prevent you from appearing defensive and from sending the unconscious message that you have a secret agenda and/or are hiding something. Which, of course, will do nothing toward make a good impression and having a successful meeting.

5 Tips for Making a Strong First Impression in an Interview

Making a good first impression is a lot of pressure, especially when a career opportunity is on the line. Interviewing is competitive for even the best of candidates.

3 Ways to Start a Conversation at Networking Events

Striking up conversations at networking events can often seem awkward and disingenuous. It can also be daunting and stressful.

A substantial portion of our communication is done through non-verbal behavior and micro expressions—subtleties that we notice and evaluate in our subconscious. In fact, only a small percentage of the brain processes verbal communication.