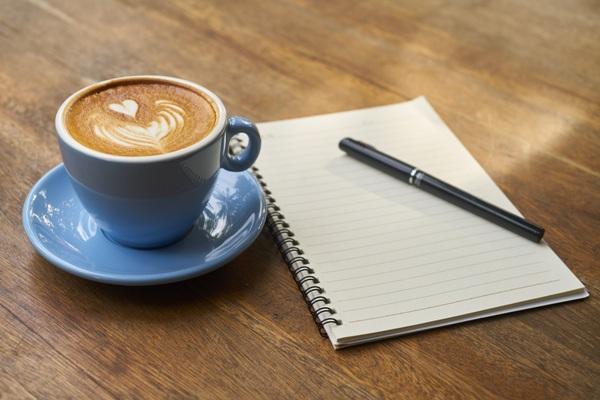 In a measure of the direct impact of the #MeToo movement, more than 1 in 4 workers indicated that recent allegations of sexual harassment against prominent men have made them less likely to think that romantic relationships between colleagues are acceptable.

That result is one of the many striking findings from Vault's 2018 Office Romance Survey—an annual survey of attitudes of workers regarding consensual romantic relationships between colleagues. 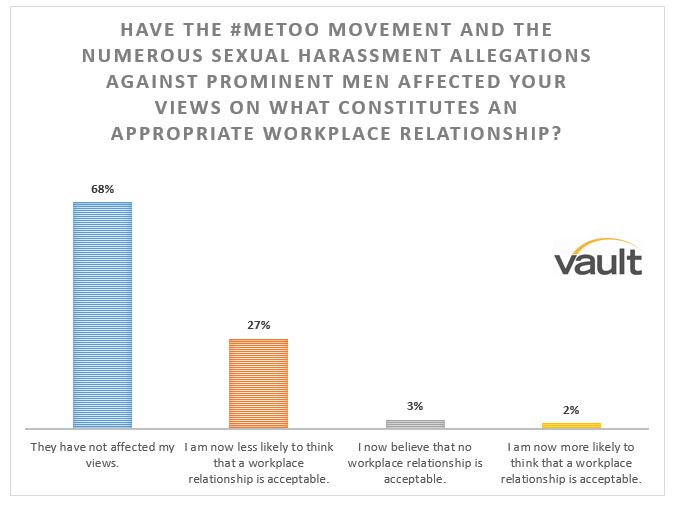 Recent events have had a greater impact on men's perspectives than on women's: more than 31% of men are now more likely to find a workplace romance unacceptable. Meanwhile, nearly 75% of women say the revelations have not at all affected their views of workplace romances. 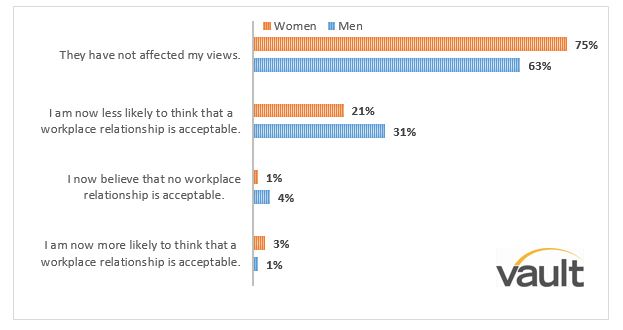 Selected Comments on the #MeToo Effect from Respondents:

That heightened awareness is also evident when it comes to the power dynamics at play within relationships: 43% of respondents believe that romances between colleagues at different levels are unacceptable—the highest proportion since the survey began in 2013, and a spike of almost 15% compared to results in previous years.

Perhaps with this in mind, this year's group of respondents reported having had few romances with those with whom they had a reporting relationship at work: just 10% of those who have had an office romance admitted to having one with a supervisor, and 16% with a subordinate.

Are Companies Responding to the Threat?

In another potential sign of the impact of the #MeToo movement, 45% of respondents indicated that their company had some kind of policy on office romances—the highest level since the survey began. It is unclear whether this is due to companies creating new policies, employees becoming aware of existing policies, or simply a variation in the sample.

However, more than a third of respondents are unaware of whether their company has a policy. 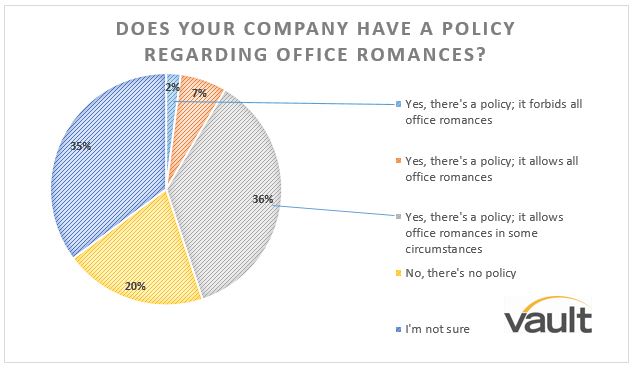 Similarly, many professionals take a dim view of relationships between employees and vendors, and those who work in the same departments: 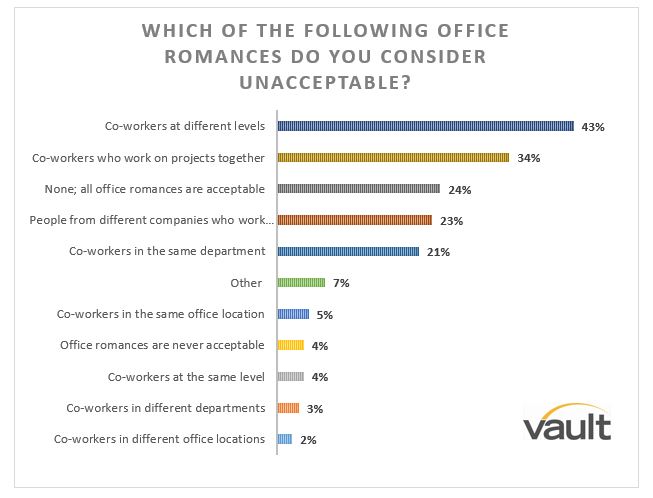 Most employees have done it

52% of respondents admitted to having had at least one office romance, with "random hookups" being the most common type of relationship. 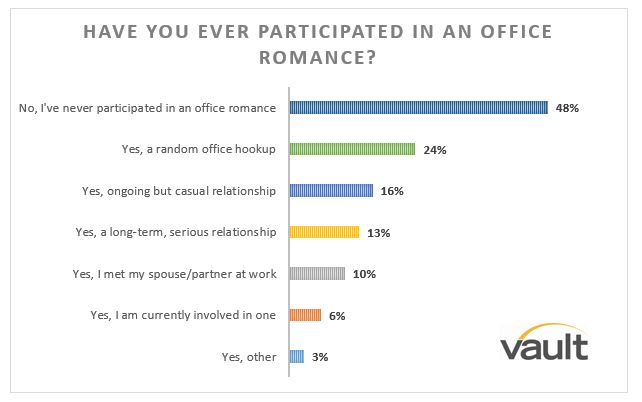 Given that finding, the most common way that office romances start isn't too surprising: office parties and happy hours. 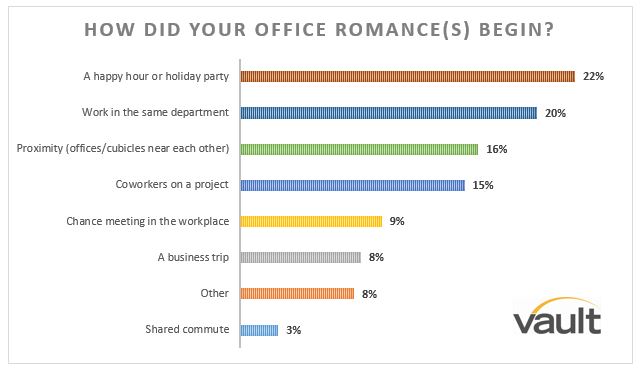 The Price of Cheating

Nearly half of employees know co-workers who have had affairs, and almost 20 percent of respondents themselves have had an affair with a colleague.

And those affairs frequently resulted in the end of a long-term relationship, even if they didn’t directly affect the participants’ careers: 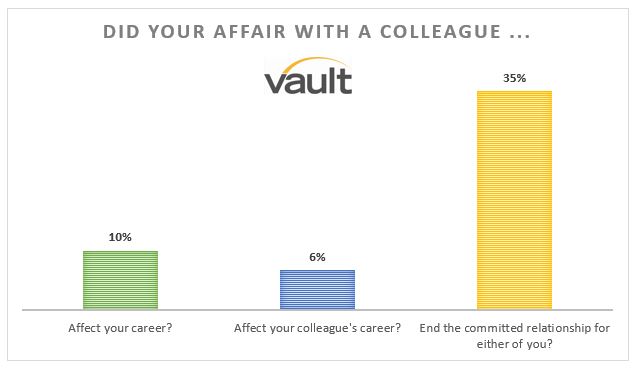 Despite the difficulties, most would do it again

When it came to regrets, this year's panel didn't seem to have too many: 78% of those who have had a previous office romance indicated that they would be open to doing so again—the highest proportion since the survey began. 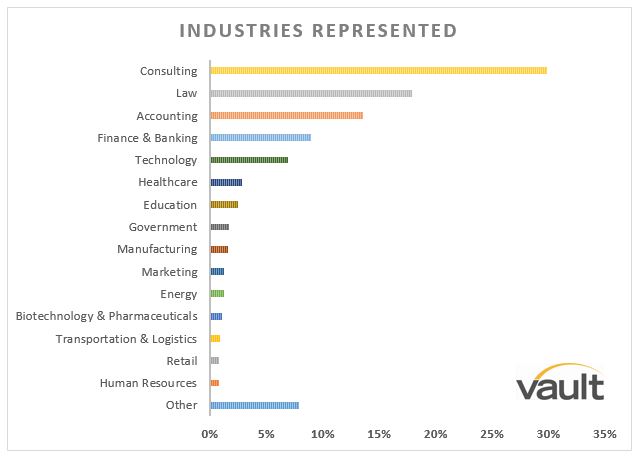 While the Vault survey has previously covered the lighter side of office romances and their impact on the workplace, this year it included questions that specifically asked respondents to assess the impact of the ongoing #MeToo movement and coverage of widespread allegations of sexual misconduct on their attitudes. These questions were presented at the end of the survey, to avoid priming respondents or prejudicing their responses to other questions.

For any questions regarding the survey, please feel free to contact Vault editor Phil Stott at pstott@vault.com

Making decisions—especially the kind that lead to high-quality outcomes—can be wearing. And any number of factors can affect your ability to do so—including the time of day that you're making those decisions.

In the below video, Claire Dawson, an employment-law attorney in the U.K. , offers several tips for anyone who believes they've been a victim of workplace sexual harassment.