You Can Do Anything With a Law Degree. Sort of. 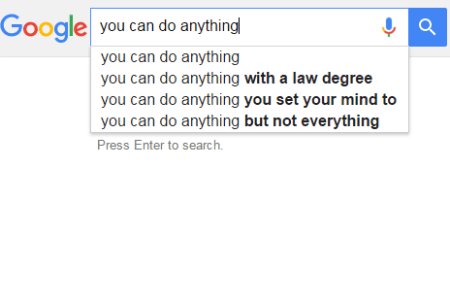 Outside of actively practicing law, there a few fields where having a law degree can be a leg up, what the ABA calls “J.D. Advantage” jobs.  According to the ABA, these jobs are those “for which the J.D. provided a demonstrable advantage in obtaining or performing the job” and cited examples include “corporate contracts administrator, alternative dispute resolution specialist, government regulatory analyst, FBI agent, … accountant, … jobs in personnel or human resources, jobs with investment banks, jobs with consulting firms, jobs doing compliance work in business and industry, jobs in law firm professional development, and jobs in law school career services offices, admissions offices, or other law school administrative offices.”  In other words, jobs that are really similar to lawyering or that deal with a lot of lawyers.  And personally, I question how much of an advantage a legal educatiobn would give you in some of these industries, particularly HR, investment banking, accounting, and any sort of non-legal consulting. But even including those fields, these jobs are a far cry from “anything.”

So, can you do anything with a law degree? Yes. Can that degree actually help you do many things outside of practicing law? Well, actually, maybe the answer to that is yes too.  Not the JD itself, but the skills you developed in earning it.  Law school may be too long, over-priced, and mind-numbingly boring at times, but you’d be hard pressed to graduate without improving your reading comprehension, writing, and problem-solving skills. All of those are skills that translate into pretty much any other career field.  You’re also likely to meet and befriend other smart, driven people in law school, and we all know that networking is the best way to find a new job. And understanding how contracts, negotiation, and the legal system work can help in myriad areas in your life, including salary negotiation, landlord disputes, and dealing with a loved one’s estate.

Now, are these benefits worth the expense and opportunity cost of attending law school if you don’t think you’ll be practicing law? Almost certainly not.  The sky-rocketing cost of a legal education and the dwindling prospects of new law grads certainly make law school an unattractive option for new graduates just looking to find themselves.

Can You Do Anything with a Law Degree? DC Lawyers Say Yes
Alternative Legal Careers: Diversity Guru & Career Expert
JDs don't have to practice to be happy
Jobs for Lawyers: Alternatives to Practicing Law

Seven Things Legal Interns Must do to be Successful

Law students are now expected to graduate with at least two legal internship experiences under their belt, including externships, clinics, fellowships, summer associate positions, clerkships, or simply a part-time law job during the school year. These opportunities are crucial for getting post-graduate attorney positions, building your practical legal skills, getting strong recommendations, and developing valuable working relationships with attorneys who will be career-long allies.

A new survey finds that 35% of the leaders of large law firms can envision a law-focused version of IBM’s artificial intelligent computer Watson replacing first year associates in the next five to ten years. The survey (PDF), which polled the managing partners and chairs of 320 firms of 50+ attorneys, also shows that 47% of firm leaders see paralegals being replaced by technology in the same time frame.

The recession has been no fun for many lawyers, especially recent graduates. Firms stopped hiring, layoffs hit some of the most prestigious firms, and plenty of firms folded altogether.

When Northwestern announced their Accelerated JD program in 2008, the law school touted their new program as an innovation that would “minimize opportunity costs and maximize learning for high achievers eager to resume their careers. ”  But last week Northwestern abruptly ended the program after only six years, citing the inability to grow the pool of applicants enough to make supporting the program economically viable.