If you struggle to make decisions, you’re not alone. Most of us have a hard time making at least some decisions in life. In many instances, this difficulty is the result of decision fatigue surrounding decisions that we make all the time; the pain of deciding what to make or order for dinner is all too real. Fortunately, whether we order pizza or sushi might feel like a difficult choice in that moment, but almost certainly will have very few repercussions regardless of what we choose—and because we know that these aren’t REALLY difficult decisions, we also tend to make them fairly quickly.

On the other hand, there are the big decisions that really are difficult, and justifiably so. These are the decisions that can alter the trajectory of our lives: buying a house, taking a new job, choosing a life partner, all that good stuff. Arguably, these decisions are major enough that they SHOULD be difficult and prolonged, if only to ensure that we’re, well, as sure as we can be about them.

Unfortunately, many of us, when confronted with these big decisions, don’t just find them difficult. Instead, we experience what’s known as “decision paralysis.” In other words, we find a decision so difficult to make that we simply can’t, or don’t, make it. As a result, we render ourselves passive in our own lives, rather than being proactive to lead the lives that we want—and we risk leading lives that are significantly less fulfilling, less happy, than we deserve.

Our goal in this post is to help you identify when decision paralysis strikes and offer a concrete tool to break free and make thoughtful decisions.

How to Know if You’re Suffering from Decision Paralysis

If you’re not familiar with the term “decision paralysis,” it’s really just a fancy way of describing indecision, which is defined as “the quality of being unable to make a decision or having a lot of difficulty in deciding something.” And we’ve all experienced indecision.

One big indicator that you’re suffering from decision paralysis is if you’re avoiding the decision, or procrastinating. Instead of considering and weighing your options, you put the decision to the side and do something else. \Scrolling through social media is a particularly insidious form of procrastination; it’s readily at hand and feels like a minor distraction, but can ultimately suck up huge amounts of time that we don’t even realize we’re losing.

Why Decision Paralysis can Lead to Bad Choices

Procrastination might seem like a relatively benign coping mechanism, but it becomes problematic when a decision is inevitable and impending. Not only does avoiding a decision mean that we’re not thoughtfully weighing our options; the longer we put off a decision, the less time we ultimately give ourselves to make that decision. Less time to make a decision can result in even higher stress surrounding the decision, and make it even more difficult to properly evaluate the options.

All this stress can have an even more significant consequence: When a decision simply feels too difficult—when the options in front of us are too unknown, or the perceived risk is too high—we revert to our default. We choose the least scary, the most familiar, the lowest-risk option—which, more often than not, is simply maintaining our status quo, rather than pursuing something new.

We see this across the decision spectrum, in scenarios as low stakes as choosing what to order for dinner at a restaurant. How often have you scanned a menu, seeing so many tempting and interesting dinner choices—but when the server arrives, you freeze up, unable to choose between all those options…and you order the same thing you always order, because it’s easier? After all, you know you like the buffalo chicken salad, and what if you spent $24 on a pork chop and didn’t like the sauce? Doesn’t that feel like a worse outcome than missing out on trying something new?

That’s just dinner, so it makes sense that when confronted with the idea of taking a new job, the paralysis is much worse. A new job is a seriously high stakes decision that can be filled with uncertainty and risk; choosing and then not liking a pork chop for dinner might put a damper on your evening, but taking a new job and then hating it can put a damper on your life. In that light, it’s easy to see why many people wind up staying in jobs that don’t fulfill them and aren’t ultimately what they want professionally. The devil you know…

Ever heard of a decision matrix? There are certainly a number of different models to choose from, but all serve similar purposes: to assign different decision factors numerical values, typically using columns and rows, that allow you to visually compare possible solutions by weighing variables based on importance. Here’s an example: 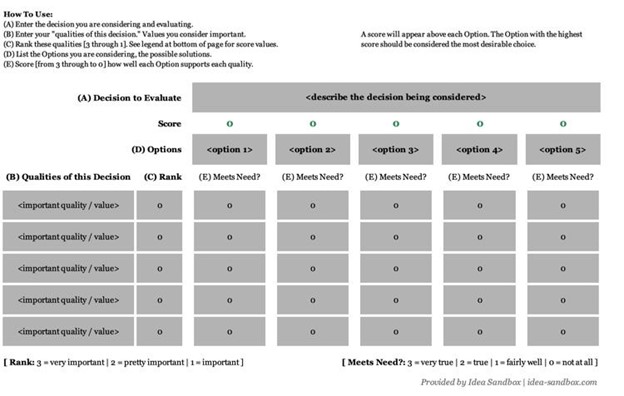 That’s just a screenshot of the tool, which is actually an Excel spreadsheet with formulas designed to help calculate values. In the above model, each column is designed to be populated with one of your decision options, while each row is assigned an important factor in your decision. By assigning values, you end up with a numerical score for each option that, ideally, will reveal the best choice based on your identified priorities.

Here’s what this might look like if you’re a law student trying to rank cities in which to pursue jobs, based on the assumption that your family lives in the New York area and several other factors: 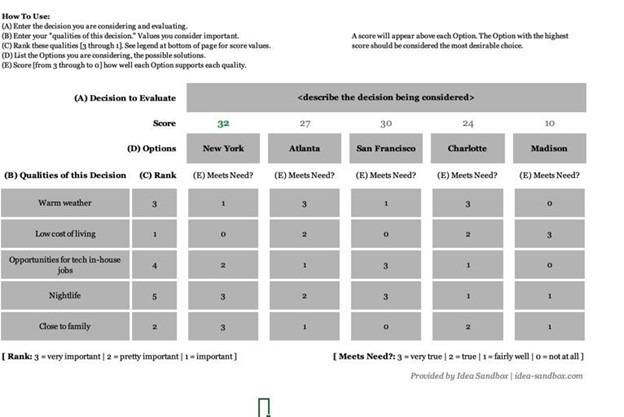 Using this model and assumptions, if you assigned your values correctly, New York jumps out as the clear winner, followed by San Francisco.

If you want to use the above matrix as a tool, it’s available to download here.

If you Don’t Like Your Outcome, That’s Also Revealing

Let’s say the above hypothetical matrix is yours… but you’re left feeling dissatisfied or unhappy with the results. Based on the numbers, New York should be your top choice, and yet your gut reaction is: I don’t actually want to move to New York. Does this mean the model actually doesn’t work?

The answer is no, and here’s why. This decision matrix assumes that you have correctly assigned ranks and values to each aspect of your decision, and the answer it spits out is based on that assumption. In reality, however, we often DON’T know the correct ranks and values—that’s part of what makes a decision difficult! When we’re confronting decisions in the abstract, however, it can be hard to see where our errors lie.

The beauty of a decision matrix is that we can see, quite clearly, the outcome that our assignments generate—and a gut reaction to that outcome can be very revealing. In this example, your gut tells you that you don’t actually want to move to New York. If that’s the case, then one or both of two things are true: You didn’t correctly identify the most important factors in your decision (the rows), and/or you didn’t correctly assign rankings to those factors. Armed with this knowledge, you can revisit your matrix to find your errors.

For that matter, even a vastly simplified version of a decision matrix can be telling: Try flipping a coin. Flipping a coin gives you a definitive outcome, and how you feel in response to that outcome can often reveal a lot about your desires and priorities.

The next time you have a decision to make, we encourage you to utilize one of these tools and see how it goes. You might surprise yourself.

The Benefits of Pro Bono Work

Pro bono publico (“for the public good”), or pro bono work, is the offering of free or low-cost services to those who cannot afford them. Pro bono is either required or strongly encouraged in the legal community for all lawyers and is not limited to those who chose public service as a career.