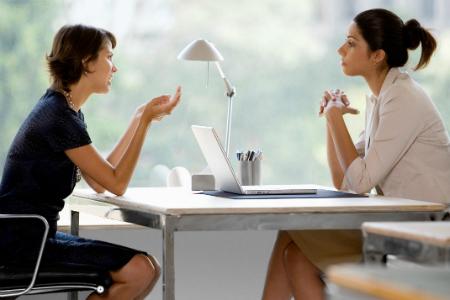 It’s totally normal to be intimidated by a job interview. Most of the time, you’re interviewing for a job because you want that job, which means there’s something you care about on the line. For many people, interacting with other humans can be daunting regardless of the setting. It can feel impossible to prepare for every possible question an interviewer might pose, which creates a powerful sense of uncertainty.

All that being said, there’s one key truth about job interviews that should bring candidates an immense sense of comfort, if only they knew it (or believed it):

From an interviewer’s perspective, the sole purpose of a job interview is to see if you’re someone they want to work with.

That’s really it. Your interviewer wants to see if you can engage in a professional, pleasant, and reasonably intelligent conversation that flows comfortably and feels sincere. In other words, the types of conversations you (hopefully) have all the time in daily life.

Credentials and work experience are important, but are not the key to a successful interview

Of course employers care about whether your background lines up with their needs. The weight an employer will give work experience vs. credentials depends, in large part, on how much you have of each.  In the vast majority of job scenarios, there is at least a minimum set of qualifications a successful candidate must possess, along with a further “preferred” set of qualifications. The more closely your experience matches an employer’s list, the more likely you’ll get the job.

What if you don’t have significant work experience? For these candidates, including law students who went straight through from undergrad to law school, credentials—meaning GPA, school, class rank, etc.—function as predictors of future ability. (Whether credentials SHOULD function this way is a topic for another time).

None of that negates the premise of this post, because all of these things are—or should be—on your resume already! Assuming that your resume is in good shape, an employer likely does not need to interview you to determine whether you possess the desired qualifications or credentials (unless you actually don’t possess all the qualifications but you’re making the case that you can do the job anyway, which is also another topic for another time).

So, what is the job interview for? See the fourth paragraph above. It’s about having a conversation, plain and simple.

Why your interviewer wants to have a conversation with you

You’ll hear all the time that interviewers use interviews to determine whether a candidate is a “good fit” for a job. In reality, it’s highly unlikely that anyone—interviewer or candidate—will be able to assess “fit” based on one, or a few, relatively short conversations. What an interviewer CAN assess is your ability to have the type of conversation we’ve already described.

For one thing, the ability for coworkers to have professional and pleasant interactions is a huge part of what creates a “collegial” office environment. To put it plainly, people don’t want to work with a pushy jerk or a conversational narcissist.

Similarly, your interviewer wants to get a sense of how well you’ll work with clients. After all, the legal profession is a service industry, meaning that lawyers provide customer service. Just like in any other industry, good customer service is hugely important for business.

Again, it’s unrealistic to think that an interviewer can assess all that in a short screener interview, and they know that. But they’re getting a first impression of you, and first impressions are huge. If your interviewer walks away from that screener feeling like you were difficult to talk to, weren’t engaged, or any number of other less than ideal impressions, you’ve hurt your chances at getting another interview—and the job.

Are you familiar with the theory of multiple intelligences? It’s based on the idea that people possess different modalities of intelligence: mathematical, linguistic, artistic, kinesthetic (physical), intrapersonal, interpersonal…the list goes on. The point is something that we’ve probably all been taught since birth—that we can’t be good at everything.

Just like some of us are gifted at languages, or basketball, or musical composition, others are naturally more comfortable interpersonally—meaning interacting with other people. Conversely, some of us are not born comfortable conversing with strangers (or anyone for that matter). If that’s you, and you’ve gotten to this point in this post and are thinking, well, how am I supposed to succeed in job interviews? We have good news.

It’s entirely possible to improve interpersonal skills, just like anything else

Most people aren’t born Mozart, but plenty of us learn to play the piano well enough to perform and enjoy it. There’s only one Albert Einstein, but lots of people pass AP Calculus. The same principle applies to interpersonal skills.

You absolutely do not need to be born with the conversational prowess of Oprah Winfrey in order to ace an on-campus interview—but you CAN learn from the great communicators of the world and incorporate a few key pointers into your own communication style.

There are all kinds of resources out there for learning strong interpersonal skills, and we’re not trying to say we’re one of them. We can certainly encourage you not to give up before you start, and pass along a few tips to get you started in an interview:

First: Before your interview, do some self-reflection.

Often people struggle with interpersonal skills because they also lack self-awareness. Try to get a sense of your own strengths and weaknesses before going in.

Before you answer, think about whether your response invites further conversation. Can you move the conversation forward, rather than just providing information?

Third: Pay attention to what your interviewer says in response.

One of the biggest mistakes people make in a conversation—including an interview—is planning the next thing they’re going to say, instead of listening to the other person. When someone isn’t really listening, it’s noticeable.

Fourth: Remember that your interviewer is a person just like you.

They have likely lived an interesting life and work at a firm that you hope will hire you. Don’t just pretend to be engaged for the sake of your interview. Actually BE interested in your interviewer. You’d be amazed how much people can pick up on sincerity (and lack thereof).

Vault.com's Recruiting expert, Eileen Levitt, weighs in with some answers to frequently asked questions. <p><b>Q:</b> When is it appropriate for candidates to bring up salary and benefits - and how? When is the right time? <p><b>Eileen:</b> Generally, the employer will ask about previous compensation and provide the candidate with a benefits overview.

Companies these days look for more than whether you're a witty or especially cool individual when it comes to personality. Among the characteristics highest on their list are teamwork and innovation.

Interview Questions: Following Up After the Interview

When the interview ends, leave the building as gracefully as you entered, making sure you're as cordial to people on the way out as you were coming in. As you decompress, take some time to review the interview while it's still fresh in your mind.

If you recently worked for Bear Stearns or are about to graduate from college, chances are you're frantically interviewing for jobs. The competition is steep, but good interview etiquette can set you apart from other applicants in a tough employment market.