How to Become a Harvard Law-Trained Novelist

Jeremy Blachman came to legal world fame a decade ago through his blog Anonymous Lawyer, a satirical view of BigLaw firms through the eyes of a fictitious partner. Though still a Harvard Law student at the time, Jeremy’s hilarious view of law firm life attracted lawyers’ and students’ attention and led him to write his first novel, also called Anonymous Lawyer. Last year saw the release of his second novel The Curve, co-written with Cameron Stracher. Set in a fictional failing law school on the Gowanus Canal, the book skewers the modern legal education. I interviewed Jeremy about his path to becoming a writer, co-writing a novel, and predatory law schools. 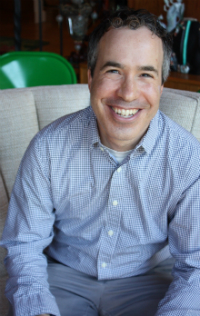 Although you’ve got a JD, you haven’t ever practiced law. Was your plan all along to become a writer, or did you plan to be a practicing attorney?

I'd be lying if I said I ever really planned to be a practicing attorney. In undergrad (at Princeton), I spent a lot of my time writing sketches and songs for a student-written musical theater group, the Princeton Triangle Club. It was there that I really learned to be a writer and realized it was a passion and a skill. But I had no idea how to turn that into a career. I took the LSAT senior year and applied to law school—and got in—but at the same time I was also interviewing for jobs and wasn't sure what my best path was. I ended up deciding not to go to law school, and took a job in marketing for a software company in Austin, Texas. It was a creative job—probably the most creative I could have had a software company—but I quickly realized it wasn't really what I wanted to be doing.

I started writing some sketches on the side, and then some sample television scripts, and I e-mailed some agents to see if that was a realistic path... but the typical route to break into TV would have been to move to LA, try to get a job as someone's assistant, and move up the ladder that way, and I didn't see that as a realistic path for me (I didn't think I'd be a very good assistant, and I was much too risk-averse to go down that road anyway). So I ended up going to law school to buy myself—admittedly, at an expensive cost—three years to figure out how to be a writer, while at the same time I'd have the degree to fall back on in case I needed it. I wanted to be able to feel like I was doing something smart—and going to Harvard Law School definitely sounded like a smart thing to do—even if I knew I wasn't terribly interested in becoming a lawyer. It was a bad reason to go to law school, but I think a lot of people go to law school for similar reasons, not sure why they're going but hoping things will figure themselves out. I didn't expect to end up writing about the law, I really didn't—but it turned out that I was able to do so in a way that people responded to, and once I started my Anonymous Lawyer blog, I very quickly found an audience and my choice to go to law school ended up making sense in retrospect, even if I could have never planned on what happened.

You co-wrote The Curve with Cameron Stracher, another lawyer/novelist. How did you and Cameron meet and what is it like co-authoring a novel?

Cameron and I initially met because he reviewed my first book, Anonymous Lawyer, for The Wall Street Journal. We met for breakfast a short time after that, just to share stories of the writer/lawyer world, and we stayed in touch afterwards, but the book got started when Cameron approached me with the idea and some sample pages he'd started to write. He thought our styles might match well, and he wanted a partner to help make this new book as funny as it could be. The process was actually a lot of fun. I was used to co-writing from my experiences in theater at Princeton and then in the TV world on Anonymous Lawyer—but never for something as substantial as a novel. We spent a good amount of energy hammering out a detailed outline before we started writing—we wanted to make sure we were both on the same page as far as where things were heading and what each chapter would cover. Then we alternated chapters, each tackling half of the first drafts... and then we'd swap pages and edit/rewrite each other's work, back and forth until we were both happy with everything on the page, and, truthfully, by the end we couldn't remember who had written which lines. We worked very hard to make it feel seamless and not like two separate voices writing. It is very satisfying to co-write a novel, more than I expected it would be—to have someone else in the trenches with you, someone whose work and ideas you trust, and who can share the burden with you as far as revisions, promotion, etc., is very nice as compared to the pressures of doing it all on your own. We've started to work on a next book, in fact.

The Curve, is set in a fictional decrepit law school whose graduates struggle to find legal jobs. Do you think law schools like that are preying on their students?

I fear there are—I mean, as we were writing the book, we were on the lookout for stories in the news about schools like these, and we found more than we expected to. It seems like—beyond the top 10, 20, 30 law schools, it's a different landscape today than it was a decade ago, before the financial crisis. I honestly don't have any real knowledge of these schools beyond what's in the news—Cameron came to the writing process with more of an insider's take, from being a law school professor and seeing more of this world—but between stories about law students suing their schools, to hearing about recruitment practices and employment numbers, it's hard to feel like the school in our book is as far away from reality as we might like to believe. I was absolutely aiming for the funny while writing—trying to push things to as heightened a level of satire as we could get away with—but I do fear there's a little too much truth in it.

Do you have any advice for anyone who is looking to move from being a lawyer to being a writer?

My best advice is simply to write! In whatever form motivates you, however you can get words on paper, just get something out there. I used to tell people to start a blog and force yourself to write every day, or at least a few times a week, and see what develops. The blog world has changed so much though—it's not the same kind of ecosystem as it was even a few years ago, people aren't reading individual blogs and building audiences in the same way. But there are still lots of ways that people can test the waters as a writer, get material out into the world, and see if people respond. There are sites like Medium, where people can write posts and potentially reach an audience. There are countless websites and magazines that accept unsolicited pitches—and, depending on the kinds of things you're looking to write, that can be a start. If it's fiction, you have to just write it. Agents and publishers are genuinely in search of great material. It feels like a closed world when you're outside of it—and even sometimes when you're inside of it—but great work can find a home. I wouldn't advise anyone to leave a stable gig for the hope of making money as a writer—but there's nothing stopping someone from dipping their toes into the writing world, seeing if people respond enthusiastically to their work, and going from there.

Like it is for many people, law was Drew Shoals' second career—before going to law school he worked as a professional drummer in Portland, Oregon. But after Penn Law and a few years at Shearman & Sterling, Drew took a professional opportunity not many BigLaw associates get: to become the drummer of one of the most successful pop bands in the world.

Leaving the Law: An Interview with Brewery Founder Eric Feldman

Eric Feldman is the co-founder and President of Brooklyn-based Braven Brewing Company, a former BigLaw associate, and (full disclosure) a student of mine when I was a legal research and writing TA back in law school. Earlier this year Eric (the guy on the left) left BigLaw behind to go full time at his growing brewery.