How Do You Run for Office? Five Key Take-Aways from the Women Running for Office Conference 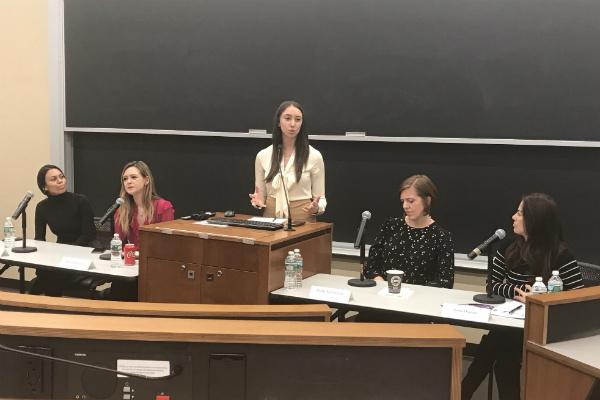 Last week, on March 29, 2019, Columbia Law Women’s Association hosted its second annual Women Running for Office Conference, aimed at giving women a look at what it would be like to run for office. The event featured speakers from such organizations as Run for Something, Amplify Her, Eleanor’s Legacy, 21 in ’21 Initiative, and NOW-NYC, as well as keynote speaker Darcel Clark, the Bronx County District Attorney. The event was essentially a clinic on running for office, and the advice and insights shared were both useful and inspiring.

For many, the prospect of pursuing a political office is daunting, especially if you don’t have any political connections, resources, or experience. Below are some key takeaways from this conference for women who are considering running.

Consider The Differences in How Men and Women Get Involved.

How many times do you have to ask a woman to run for office? According to Brette McSweeney, executive director of Eleanor’s Legacy, the old adage goes something like, “A woman needs to be asked seven times to run for office. A man wakes up one morning, looks in the mirror, and says, ‘Good morning, Senator.’” McSweeney shared that while this figure may be out of date, it usually takes at least two asks to get a woman to agree to run for office.

On a positive note, this tendency may be changing, at least as it relates to women’s participation. Amanda Clarke, regional director of Run for Something, spoke about the founding of the organization after the 2016 presidential election. They expected to get about 100 applications from people looking for support in the first few months. Instead, 1,000 people signed up in less than a month.

One resounding point made at this event was that, in order to effect change in one’s community, you have to take aim at the local level. When we think of elections and elected officials, most of us go right to the top: the president and Congress. But the speakers at the event pressed the importance of local positions. City council members and heads of school boards can often make tangible differences to communities that can’t be made at the national level.

Amanda Clarke shared a story about a candidate who ran for county coroner on the platform of correctly gendering transgender individuals after death. That’s a hugely important issue, but probably not one that you’d see go through the House and Senate. So it’s important that passionate people find positions where they can accomplish good, in a capacity well suited to them—and these positions can often be found in their own backyards.

I guarantee you that every woman in this country is sick to death of smashing barriers: From workplace discrimination right on down to the pink tax, not to mention the countless additional issues faced by women of color and LGBTQ+ women, sometimes the walls that are systemically put around us can seem like they form a concrete room (with a glass ceiling, of course). Well, running for office is more of the same. It’s another boys’ club that women have to use everything in their arsenal to get into—and getting in is just the first step.

No person who spoke at this conference wanted the women attending this event to leave uninformed about how difficult running for office is. They explained that, although you become a public figure, running a campaign can be extremely lonely. This is why so many organizations exist to help candidates, and now many of them are aimed at getting women and diverse individuals in office.

As is often the case with barrier-smashing, women running for office face considerably more challenges than their male counterparts. One issue that was brought up quite a bit at this event was the question of qualification. Not merely in comparison to other elected officials (although that was brought up plenty) but also in that, oftentimes, women don’t feel qualified to run for office in the way that a man might. Amanda Clarke cited that women often feel hindered by not having a specific plan in place for the change they would attempt to effect in office. In reality, voters don’t generally expect a candidate to have an exact plan—they merely want to know the candidate’s values and goals, and assume that the candidate will form the plan once they take office. And as for qualifications? Most speakers seemed to agree that, instead of spending all their time “proving” that they were “worthy” for the position, it’s more useful for the candidate to talk about the issues and why they’re so passionate about them.

When asked about any backlash her campaign faced, Melissa Sklarz, Senior Government Relations Specialist at SAGE (who ran for NY State Assembly in 2018) offered this piece of wisdom: “If I was afraid of people being mean, I’d have stayed home and played with my cat.” Running for office requires bravery and belief in oneself and one’s capabilities—something I think the speakers at this event who have run for office have in spades.

Campaign funding was another hot topic—from the amount one is expected to contribute to one’s own campaign (nothing, ideally) to various ways in which to secure the funding one needs. Amanda Clarke gave a great model of “the hard ask,” while Manhattan borough president Gale Brewer encouraged potential candidates to just ask people. According to Brewer, people want to be called up and asked to be part of the electoral process—they simply need the candidate to ask and give them the opportunity. And she would know—Brewer has been running for offices (and winning) since 2002.

That said, candidates also agreed that, by and large, “people power” proved more useful to campaigns than finances—at least at the state and local levels. Amplify Her is a grassroots organization that had people on the ground in 2018 for Alessandra Biaggi, Catalina Cruz, and Jasmine Robinson, among others—all women who took office.

If You to Run for Office, Take Action.

The most important thing that could be taken away from this event was that, if you’re a woman who has thought about running for office, you should certainly do more than think about it. It’s important that women are seen at every level of governance. So don’t be afraid to act on your desire to bring change to your community. Be prepared and be aware, but not afraid—because your voice matters.

Which Legal Practice Area Is Right For You?

Deciding to go to law school is one thing; selecting what type of law to practice is an entirely different matter—and a confusing one at that. If you’re not quite sure which firms excel in your desired practice area or even what the differences between certain practice areas are, you’re not alone.

Bidding on law firms for on-campus interviewing can be an overwhelming process. Many law students are entering the legal world for the first time, and firms can start to look the same as you try to whittle them down to your top choices.

Tips for Gaining Courtroom Experience as a Law Firm Associate

Stories abound of junior litigators being cemented to their chairs, reviewing documents for hours and not seeing the inside of a courtroom. But not all firms are created equal when it comes to offering stand-up experience.