Has the Income Gap's Moment Finally Arrived in the U.S.? 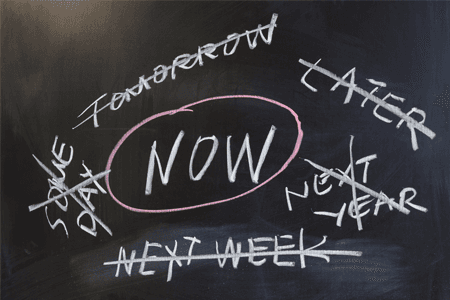 "There’s something wrong when CEOs make 300 times more than the American worker."—Hillary Clinton, yesterday, in Iowa.

I include that quote not as any sort of endorsement of Hillary's nascent campaign, but rather as an indication that wages—and specifically the gap between the highest earners and the lowest—finally seems to have punctured the political consciousness of at least one of the most likely candidates for the presidency. When someone of Clinton's political savvy and standing is campaigning for national office on that kind of message, the chances are that it's because it has been tested and focus-grouped and found to be a potential vote-winner.

Put another way: people are talking about income inequality in the U.S. in a way that hasn't been seen for a very long time, indeed. Is it possible that a national pay raise is around the corner?

This past week has been an interesting one for followers of news related to wage levels and living conditions. First up, we had everyone's favorite feel-good story of the week: the decision by Seattle-based Gravity Payments' CEO and owner Dan Price to raise the base salary at his firm to $70,000 over the next three years.

According to Price, whose own salary, as reported by the NY Times, will be dropping from close to $1 million down to $70,000, "the market rate for me as a C.E.O. compared to a regular person is ridiculous, it’s absurd."

While much of the coverage of the decision has focused on Price citing Angus Deayton and Daniel Kahnemann's work on happiness as a driving factor, a different line from the Times piece stood out to me, as Price spoke about talking to friends and colleagues about their salaries:

“'They were walking me through the math of making 40 grand a year,' he said, 'then describing a surprise rent increase or nagging credit card debt."

"'I hear that every single week,' he added. 'That just eats at me inside.'"

I don't know that I've ever heard a CEO enunciate that concept so clearly before: that they simply didn't understand what it was like to try to live on the salaries at the lower end of their companies' scale. But it did remind me of a quote I recently stumbled across from Jack Welch who, in an interview about his online management education program, was asked by the Wall Street Journal what was missing in traditional MBA programs. His answer: "They miss a lot of the human equation about building teams, about being generous managers who love to see their people succeed, who love to give their people raises and promotions."

Whether that will be on the minds of the nation's fast food company executives and franchise owners this week is another question entirely, but it's a sure bet that they'll be thinking about their labor costs in some form: after all, there's a good chance that their own employees are out in force in one of the 200+ U.S. cities where fast food workers are striking in support of a higher minimum wage today.

Of course, the difference between the two examples here is the concept of who gets to do the wage setting: the private company, or the government. While the Gravity Payments story has been a heartwarming one this week, it's also very much an outlier; if it wasn't, U.S. household income would have rebounded along with economic growth since the recession. As this chart shows, that clearly hasn't happened: 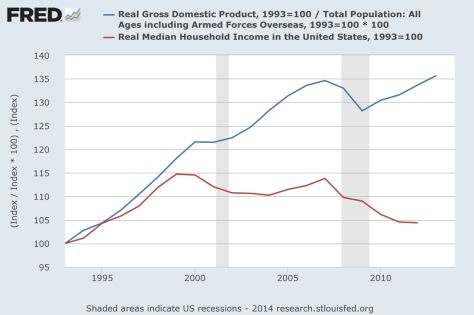 With that in mind, it's no surprise to see income inequality starting to feature in the national conversation. Whether it results in any tangible improvement in the average American's paycheck, however, is another story altogether.

What's your take on the income gap? Is raising the minimum wage a solution? Let us know in the comments below.

Can Companies Save Money By Paying Their Employees More Money?

Have you ever wondered why Trader Joe's employees are always so cheerful and helpful? If so, here's New Yorker financial columnist James Surowiecki with the answer:

A substantial body of research suggests that it can make sense to pay above-market wages—economists call them "efficiency wages.

FOR IMMEDIATE RELEASE: October 22, 2014 to Be First Annual 'Women in Tech Ask For a Raise Day'

In the wake of Microsoft CEO Satya Nadella's comments that women working in technology shouldn't ask for raises but instead should "have faith in the system" to be fairly paid, I'm hereby calling on women nationwide working in tech who disagree with Nadella's comments and think they're underpaid versus their male colleagues to ask their respective managers for a raise on Wednesday, October 22, 2014.

Going forward, 10/22 will be known as Women in Tech Ask For a Raise Day, the goal of which is to make a significant dent in the gender wage gap in the tech sector.

Pre-Hire Vacations: The Perk of the Future?

Are "pre-cations" set to become the next new trend among employers trying to distinguish themselves from the pack? A recent Slate article highlights a couple of Silicon Valley firms—42 Floors and Atlassian—that have been doing wha Silicon Valley firms do best: disrupting the established order--in this case, how they onboard their employees.