Last fall, in the wake of Goldman Sachs’ announcement of its new policy preventing young bankers from working on Saturdays (unless working on a live transaction), I wrote about Why Goldman Sachs’ New Saturdays-Off Policy Won’t Work. Now, some nine months later, after several other banks have followed Goldman’s suit and enacted their own “Protected Saturday” policies, I’m happy to report that I might’ve spoken too soon. As the results of Vault’s latest Banking Survey show, these new policies seem to be working.

Consider the below chart. This year, survey participants (some 3,600 of them) gave their firms an average score of 7.09 (on a 10-point scale) in the area of work-life balance. This was nearly 3% higher than the score (6.90) they gave, on average, in last year’s survey. And with respect to satisfaction with the amount of hours they work each week, survey participants gave their firms an average rating of 6.94 out of 10. That’s 1.5% better than the previous year. In addition, you’ll see that overall satisfaction scores also rose this year. 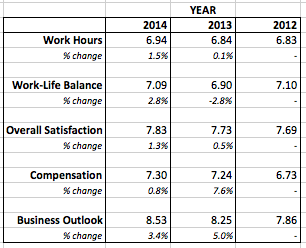 Of course, these scores alone don’t prove that the new “protected day” policies are working. It’s possible that better compensation and a better business outlook (both of which you’ll see also rose this year) had something to do with work-life balance and hour scores rising. However, many of the qualitative comments we received from survey participants directly addressed these policies. And most participants who spoke of them told us that they’re working.

“My firm is really committed to improving the culture and lifestyle to junior bankers,” one bulge bracket analyst told us. “All of the new initiatives, such as no work on Saturdays for analysts and associates, have begun to change mindsets.” Another analyst told us, “Life is good here. Saturdays are usually free, and there’s no face-time.” And here’s another analyst: “There’s no Saturday work unless you’re working on a live transaction, and you get a mandatory three-week vacation.” And another: “You get every weekend off, and you get to workout and eat a relaxing dinner Monday through Thursday. However, you do need to work late Monday through Thursday. I usually leave between 10 p.m. and 2 a.m.”

Indeed, despite Saturdays off, or Saturdays and Sundays off, certain Wall Street units (M&A and corporate finance, most famously) require their juniors to work 80- and 90-hour weeks rather regularly. Still, even those firms that are thought to be the most brutal when it comes to workloads are lightening up. Here’s a young banker at a top M&A boutique: “Hours here are unnecessarily painful, but senior management is making a strong effort to improve the firm’s culture and improve the quality of life for junior people. Unlike our competitors, you won’t see us create a firmwide protected weekend policy or anything like that, but there will be flexibility for individuals and groups.”

In any case, be sure to check back in three weeks (September 3rd) when Vault will be releasing its latest Banking Rankings, which includes, among other rankings, which firms rate best in hours, work-life balance, and overall satisfaction.

2022 Women in STEM Career Fair: A Look at This Year’s Sponsors

Are Boutiques Replacing the Bulge Bracket as Most Prestigious on the Street?

Long before the subprime mortgage-backed securities hit the fan, a handful of relatively small investment banking firms, often referred to as boutiques, regularly competed with the likes of Goldman Sachs and Morgan Stanley for talent. There was Stephen Schwarzman’s Blackstone Group, perhaps best known for its private equity offerings, although for decades its advisory unit has been well known for winning big deals and recruiting top-tier talent from top-tier schools.

Commencing your law school journey is no easy task, and can often feel like learning a new language. Professors do their best to break down legalese and abstract concepts into something digestible for students, but keeping afloat amidst the mass of content can be difficult.

Each year, thousands of international students apply for H-1B visas—temporary non-immigrant visas that allow individuals to work in the U.S. Since only a limited number of H-1Bs are given out each year, the H-1B visa process can be stressful, not to mention difficult to navigate.

2022 Women in STEM Career Fair: A Look at This Year’s Sponsors

On August 24th, Firsthand will be hosting its second annual Women in STEM Virtual Career Fair. Women who are studying science, technology, engineering, or math or who are already in STEM roles are encouraged to attend.