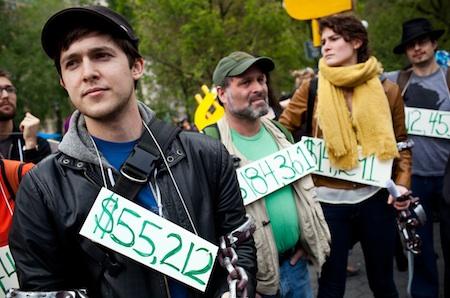 Whoever is doing PR for Natixis Global Asset Management should get a holiday bonus: a new employment perk aimed at millennials has earned the firm more positive press this week than any HR-related story since that guy who set his firm's minimum wage at $70,000.

In case you missed it: Natixis announced that it was going to start contributing up to $10,000 towards student loan debt for every employee who had been at the firm for at least five years.

In a press release announcing the new policy, John Hailer, Natixis' President & CEO, noted that the decision came out of conversations with Millennials in the company:  "In addition to hearing firsthand from our younger employees about the toll student debt can take on other financial obligations – such as saving for retirement – our extensive research on Americans' financial health supports the need to provide student loan repayment as a benefit."

Which sounds great, and all—until you actually look at the details of what's being proposed.

See that "up to $10,000" wording up there in the second paragraph? Turns out that the full $10,000 is only paid to employees who stay with the firm for a full decade—a new hire is eligible for a $5,000 payment after five years, and a further $1,000 a year for every year thereafter, until they hit the decade mark.

I don't want to rain on anyone's parade—especially when it comes to paying down student debt, which is reaching proportions that can legitimately be called a crisis—but this smacks much more of a PR move than a genuine attempt to do anything worthwhile about the problem.

It has long been known that millennials are job-promiscuous—your average 25 to 34 year old will only stay in the same workplace for 3 years. And with good reason: the longer you stay at a company, the more likely you are to be underpaid.

So the chances are that anyone who sticks around long enough to earn even the 5-year loan payoff bonus would have been better off doing the standard 18-24 month rotation before leveraging their experience for a raise elsewhere.

Who knows: maybe this is going to persuade people to stay at the company for the long haul—but I doubt it.

What’s your take? Let us know in the comments below.

There's Nothing You Can Do About Your Student Loans

Is the Student Loan System on the Brink of Destruction?

There's Nothing You Can Do About Your Student Loans

Just in case you needed any more proof that we're not likely to see a sudden U-turn from the government over the ability to clear student loans in bankruptcy, Bloomberg has another story on the subject for us today—this time detailing the lengths that Uncle Sam will go to in order to ensure that your loan will not be dischargeable in bankruptcy.

The piece focuses on the case of on Tangerie Shells, a social worker with an elderly mother disabled husband, and three children to support.

Is the Student Loan System on the Brink of Destruction?

In news that will bring hope to the heart of many a debt-saddled millennial, a federal court in Boston is currently considering an appeal by someone who is hoping to be able to break the decades-old restriction on discharging student loan debt in bankruptcy.

If the court finds in the favor of 65-year old Robert Murphy, allowing him to discharge more than a quarter of a million dollars of student debt, there are potentially massive ramifications for the student loan industry as a whole.

Has the Income Gap's Moment Finally Arrived in the U.S.?