How to Find a Mentor Without a Mentorship Program 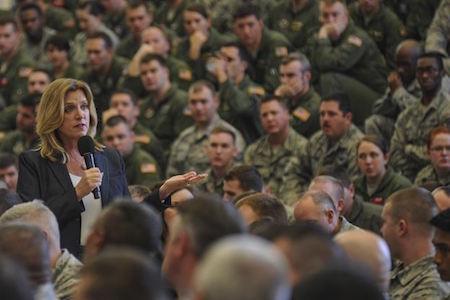 Deborah Lee James, unlike one presidential candidate, doesn't think the U.S. military is a disaster. And she should know. James is the current Secretary of the U.S. Air Force and one of only two women to ever hold the job. Today, thanks to her lofty position, she's considered to be one of the most powerful women in the U.S., if not the world. Underscoring this power, James recently spoke at Fortune's Most Powerful Women Summit and was featured on the "Fortune Unfiltered" podcast. She was also the subject of a recent New York Times "Corner Office" column. In the podcast and the column (I highly recommend digesting both in their entirety), James spoke about her greatest career setback, what it takes to be a top manager (she now oversees an annual budget of $139 billion and 660,000 people), and some of the things that have been essential to her success.

With respect to that last point about her success, James stresses that mentors were key to her 30-year career trajectory in the defense industry (her entire career has been in defense). And she points out that she never worked for an organization with a formal mentorship program. If you also face that limitation, you'll want to listen to her advice on finding a mentor.

Even if your company or agency doesn’t have a formal mentorship program, don’t let that stop you. A mentor can be anybody in your environment, but it tends to be somebody older than you and somebody who’s done things that you aspire to do.

What I tell people, and I’ve done this myself, is that if you see somebody like this, just introduce yourself and ask them if they would be willing at some point to sit down and have a cup of coffee with you and tell their story of what worked for them, what didn’t work, and how their story unfolded in life and how they got to be where they are today.

I find that 95 percent of people will give you a half-hour and a cup of coffee. And don’t we all love talking about ourselves and sharing our insights in life? You never know how broadening your network and hearing some of those failures and successes that other people have lived through might impact your life.

Along with finding mentors, James stresses the importance of staying in touch with your mentors. In the podcast, she tells about how a mentor was integral in opening up a door that led to a new job for her 20 years after their first meeting. She says she kept up with this mentor of hers once a year in an annual lunch (which is a good idea to adopt as your own with your mentors and/or strong contacts in your network).

Perhaps serving as inspiration for those who've experienced rejection early on in their careers, James, who did her undergraduate work at Duke and received her graduate degree in international affairs and public policy from Columbia, did not get the first job she wanted. James' dream was to work for the Foreign Service but the Service didn't want her; she didn't get the job she wanted out of grad school. James says she cried for days after the rejection, but she ultimately lifted herself out of bed and went with her "Plan B." Which has worked out rather well for her, and has informed a piece of advice she often offers to young people just beginning their careers

Be prepared to zigzag, because life does not always turn out like you think it’s going to turn out, and that’s true on the personal side, too. When life throws you a curveball, it’s O.K. to grieve. But don’t take too long, because you’ve got to get back up on your feet and then maybe focus on Plan B.

Maybe you want to persist and still go for Plan A, but it’s good to have a Plan B, as well. Because Plan B could turn out to be fantastic, just like it did for me.

Also worth noting is James' view on work/life balance. James is the mother of two grown daughters (30 and 32) and is now taking care of her 92-year-old mother. James says that, in your career, "sometimes you have to lean in, and sometimes you have to lean back." By this she means that there are times when you have to give everything to your job, and times when you have to pull back and give a lot to your family and relationships. She says this doesn't mean taking time off of work, and this could be done on a week-by-week basis; one week you could focus all on your work, the next you pull back a bit and make sure to have time for your personal life.

Lastly, I found James' discussion in the Fortune podcast about what the Air Force has done to battle sexual assault within its ranks to be a great a map for any organization to use when dealing with the issue. (It was also interesting to hear James say that sexual assault is not a women's issue but a "people issue," that more men than women are victims of assualt in the Air Force).

According to James, the Air Force has used a three-pronged approach in its fight: 1) Raised visibility on sexual assault and focused on training about what dignity and respect really mean, about what's appropriate behavior and what's not; 2) Reformed the laws that govern criminal behavior; and 3) Double-downed on victim care, increasing the support system for victims of assault.

This approach, says James, has resulted in fewer incidents of sexual assault and created an environment in which victims are now more willing to report incidents of assault. Which, of course, is a huge success, and anything but a disaster.

Millennials: Your Government Needs You (As Employees)

In our search for perks, cool coworkers, and a career full of excitement, it's easy to overlook local government.

3 LinkedIn Tricks to Get the Job You Want

The first rule of LinkenIn is right after you meet someone, follow up with a request to connect via LinkedIn. The reason is employers prefer to hire via referrals, and when you connect with people on a social media site like LinkedIn that you’d never otherwise meet, you multiply your chances of winning a referral.