Earlier this year, Vault surveyed nearly 3,600 banking professionals at more than 85 of the top banking firms in North America. We asked these professionals to rate their peer firms on a scale of 1 to 10 based on prestige (they were unable to rate their own firm and were asked to only rate banks with which they were familiar). We also asked them to rate their own firm in terms of compensation, hours, firm culture, work-life balance, business outlook, overall satisfaction, and other quality of life categories. A weighted formula was applied to this data to create the new Vault Banking 50.

This year, for the second consecutive year, the Blackstone Group ranked No. 1 in the Vault Banking 50. Professionals at Blackstone’s peers told us that the firm has a “very strong brand name,” is a “solid restructuring shop,” and is the “most prestigious program for budding investment bankers.” Meanwhile, Blackstone employees told us that the firm offers “top-tier comp,” “unparalleled exit opportunities,” “the opportunity to work with the best collective talent on Wall Street,” and “unlimited opportunity for responsibility and career progression, with extremely little bureaucracy and corporate nonsense.” In addition to topping the Banking 50, Blackstone ranked among the top five in nearly every quality of life category, including firm leadership (No. 2) and business outlook (No. 3). Insiders told us that the firm has “incredible leadership,” “is hitting on all cylinders,” “attracts the best students out of college and highly talented people at all level,” and “is positioned to significantly outperform its competitors due to its executive team and diversification strategy.”

Goldman improves work-life balance but stays at No. 2

At No. 2, also for the second consecutive year, was Goldman Sachs, which has recently begun to improve its quality of life standards to better attract and retain employees. “The firm is committed to improving the culture and lifestyle to junior bankers,” one Goldman employee told us. “All the new initiatives (such as no work on Saturdays for analysts and associates) have begun to change mindsets.” Meanwhile, peer professionals ranked Goldman No. 1 when it came to prestige, calling the firm the “cream of the crop” and “the top investment bank,” which has “great deal flow” and offers “excellent exit opportunities.” What kept Goldman from jumping over Blackstone in the Banking 50 this year was its quality of life, which, though improving, still has a ways to go to compete with the smaller firms on the Street. Goldman ranked No. 15 in both hours and work-life balance, while Blackstone ranked No. 2 and No. 3, respectively, in those categories. Goldman insiders, which gave their firm a higher work-life balance score this year vs. last (6.742 vs. 6.614), told us that although “you obtain wonderful contacts and create a great network of people while working with highly intelligent, positive, interesting [colleagues] and the best clients in the world,” “work-life balance is extremely difficult to achieve, given very high expectations.”

At No. 3 this year in the Banking 50 was Morgan Stanley, which leaped three spots from its No. 6 ranking last year. The firm’s reorganizing and focus on wealth management is indeed paying off. James Gorman has turned the bank around after a few tough years, and it’s now back to competing with Goldman Sachs for the title of best full-service investment bank in the world (Blackstone doesn’t underwrite securities so isn’t considered a full-service shop). Morgan Stanley’s ranking in the Banking 50 underscores this reemergence. Peer bankers call Morgan Stanley a “powerful brand” and a “premium bulge bracket” whose “business outlook is looking better.” Indeed, Morgan Stanley has increased its name brand as of late, thanks to scoring several high profile advisory and underwriting deals. In particular, its tech banking group, which famously fumbled the Facebook IPO, has been doing very well since then. It’s one of the lead underwriters on Alibaba’s forthcoming IPO, which could be worth more than $20 billion. And this past February, it advised WhatsApp on its $19 billion sale to Facebook. As for Morgan Stanley’s insiders, they say they work on “high profile, interesting, complex, important transactions;” “the culture is fantastic and [there’s] a great team spirit”; and they’re offered “early responsibility” and “exposure to smart senior people.” Still, they complain about the “lower than average pay” and, like many other firms’ bankers, the “long hours.”

At No. 4 this year was J.P. Morgan, which ranked No. 1 two years ago and, judging by its continued slide in the Banking 50, might still be recovering from the PR fallout, if not the multibillion-dollar trading loss surrounding the London Whale scandal. Even so, bankers at the firm believe prosperous times are ahead. “The business outlook is challenging for everyone but we’re competing hard,” one J.P. Morgan banker told us. “Morale is good, and I have high confidence in our leaders at all levels of the firm.” J.P. Morgan insiders also told us that they’re offered plenty of “development opportunities due to the size and diversity of the business,” and that they enjoy “working with smart, motivated, interesting people on challenging and impactful projects.” However, “work-life balance” was cited as a drawback, and “the size of the business can at times make it feel difficult to get things done.” That said, peer bankers believe J.P. Morgan is still “in the running with Goldman and Morgan Stanley for top bulge bracket shop.”

Centerview, a boutique on the rise, climbs two spots to No. 5

Aside from Morgan Stanley, Centerview Partners was perhaps the biggest story in the rankings this year. The relatively young partnership (begun in 2006), not to mention small (just 200 employees), has been making quite a name for itself when it comes to high profile M&A transactions. Its deals in recent years have included Altria’s $113 billion spin off of Philip Morris, Time Warner Cable’s $70 billion merger with Comcast, and Energy Future Holdings’ $42 billion restructuring. “We do half the volume of deals as many bulge bracket banks with maybe less than one-tenth the number of employees,” one Centerview banker told us. “This translates into a better experience (in terms of both comp and exposure) for everyone working here.” Indeed, insiders rave about the “level of responsibility and respect,” the “interesting projects and clients,” the “great people,” the “terrific culture,” and the “top of the Street compensation.” In fact, Centerview is well known for paying its staff very generous salaries and bonuses, and this year, yet again, the firm ranked No. 1 in compensation in our quality of life rankings (see the below table for historical compensation scores for the top six banks in this year's Banking 50). It also ranked very well (No. 4) in overall job satisfaction, beating out Goldman, Morgan Stanley, and J.P. Morgan, among others, in the category (see the table below for historical satisfaction ratings). Meanwhile, peer bankers had nearly all good things to say about Centerview, calling it the “top shop right now” and saying that it works on “massive transactions” and is “killing it—[it’s] on every big deal and pays HUGE $$$.” Centerview insiders do concede that “given lean [deal] teams, hours can get brutal during live deals.” 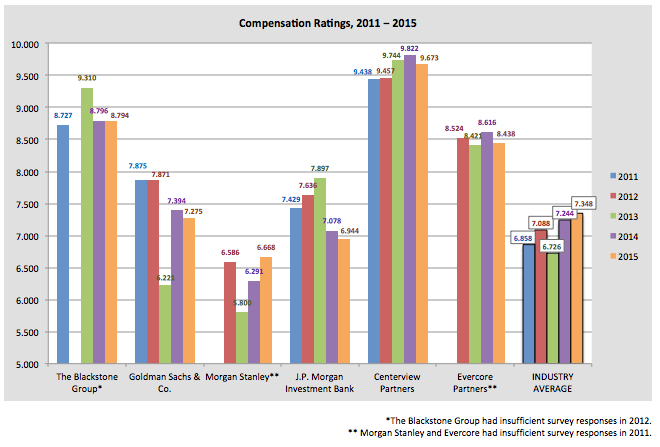 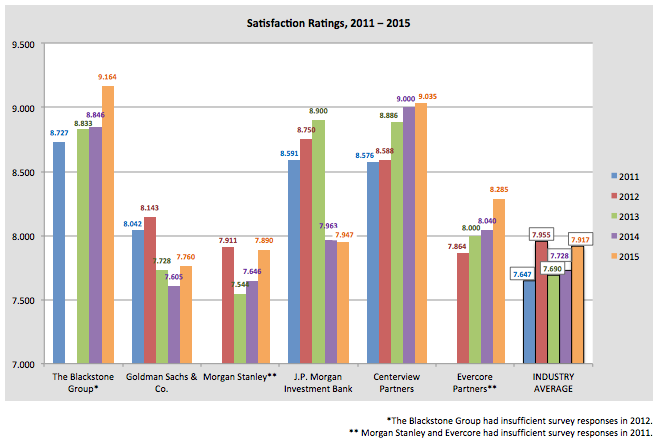 Work-life balance is getting better on the Street; new policies seem to be working

Perhaps more striking than any single rise in the rankings, work-life balance scores are improving across Wall Street, perhaps underlining the fact that “Protected Saturdays” and other workplace policies enacted earlier this year are working. This year, survey respondents told us they’re more satisfied with the hours they work and the work-life balance they receive than they were last year (see the below tables that show historical scores in both categories for the top six firms in the Banking 50). Overall, work-life balance scores rose from an average of 6.90 to 7.09, nearly a 3 percent rise. Banking professionals told us that “there’s no Saturday work unless you’re working on a live transaction,” “there’s no face time,” “you get a mandatory three-week vacation,” and “you get to workout and eat a relaxing dinner Monday through Thursday.” 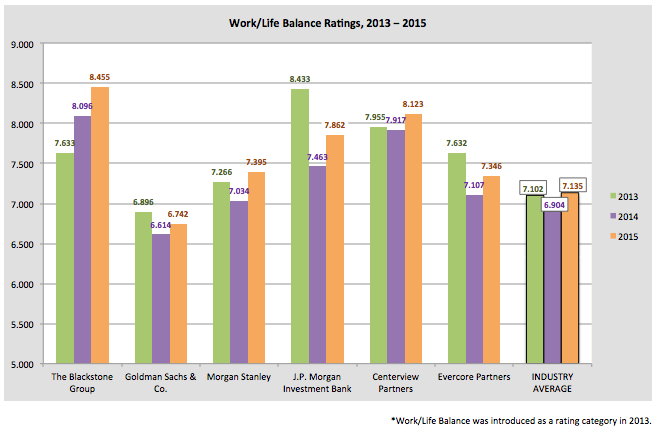 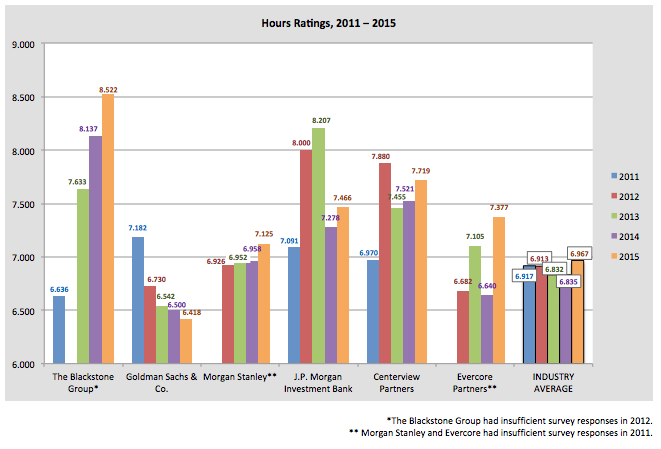 Diversity scores are rising; does this mean the old-boys club is shrinking?

Read More:
Have Wall Street’s Gay and Female Diversity Policies Gone Too Far or Not Far Enough?
Goldman Sachs’ ‘Protected Saturday’ Policy Might Be Working After All
An Open Letter to Wall Street Recruiters: What Junior Bankers Really Want

I would first like to say that I do very much applaud you for making an effort: those “protected weekend” policies were a nice touch (and the least you could do in light of what happened last summer) and the 20 percent salary hikes just announced will not go unappreciated. However, if you really are, like so many financial journalists and bloggers, including this one, have pointed out, attempting to compete for America’s most excellent sheep with the Googles and Facebooks and Twitters of the world, then you have been, as they say, barking up the wrong trees.

Have Wall Street’s Gay and Female Diversity Policies Gone Too Far or Not Far Enough?

Although Wall Street is still considered, in some corner cubicles, to be an “old school,” “Waspy,” “predominantly Caucasian male-dominated” industry filled with “ex-Ivy Leaguers,” it has slowly been growing more diverse with respect to gender, race, and sexual identity. In fact, in the past five years, the industry has gone from not wanting to even talk about diversity issues to downright blasting them over loudspeakers.