The Reality of the Job Market for Millennials is Not Pretty

Millennials. Whether you believe that they're the most entitled generation ever to walk the Earth, or the one most let down by the generations that have preceded it, there's no disputing that they've had it tough on the job front. Graduating into the worst economy since the Great Depression is no-one's idea of a good time, but it’s a story that's sometimes difficult to comprehend for those who have enjoyed being able to hunt for a job during periods of relative prosperity.

A recent study from Accenture underlines just how tough the past couple of years have been for the graduating classes of 2012 and 2013 out there in the real world. For example: of the 42% of grads surveyed who managed to find a job within 6 months of graduation, just 67% are working in their chosen field. And only 60% are making more than $25,000. And those are kids who graduated during a period of employment growth: think what it must have been like for the class of 2009. No wonder they're still living at home.

For more stats, check out this infographic from Accenture, which also details how the experiences of the past two graduating classes stack up against the expectations of the class that's about to hit the job market in the coming months (hint: they're not going to like it). 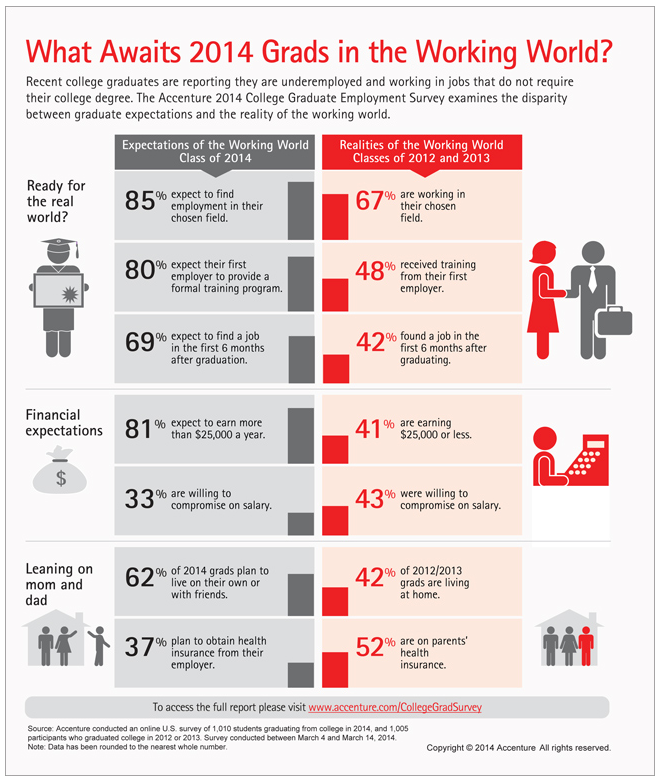 3 Things That Millennials Know About Success That You Don't

Training: Coming Soon to a Workplace Near You

Training: Coming Soon to a Workplace Near You!

Question: what recipe can you make with the following ingredients?

3 Things Millennials Know About Success That You Don't

Poor Millennials. It's bad enough that they're struggling with little job experience in a tough job market, but we're all beating them up for even trying.

It's a tough time to be a young person thinking about a career. On one side, you've got a lousy job market that guarantees success for no one.