The Jobs Most Likely to Suffer from Automation

In recent years, we've written a fair amount about the risk of losing your job to automation on this blog. (Like this post and this one, both within the last couple of months). And when we do, it's usually with one main goal in mind: to ensure that there is no-one out there who is serious about their career that doesn't see the continuing wave of automation coming.

Don't get me wrong: we're not doomsayers—we just don't want anyone to wind up on the end of the "I used to work as a print-setter or lamplighter" end of the spectrum.

The best way to do that: train for a career that requires the kind of knowledge and/or creativity that that only humans are capable of (at present anyway).

Case in point: this chart, which comes to us from Business Insider, who in turn sourced it from a note Morgan Stanley researchers sent to clients, who based it on data from a 2013 academic study that found some 47% of total US employees are at risk from automation. 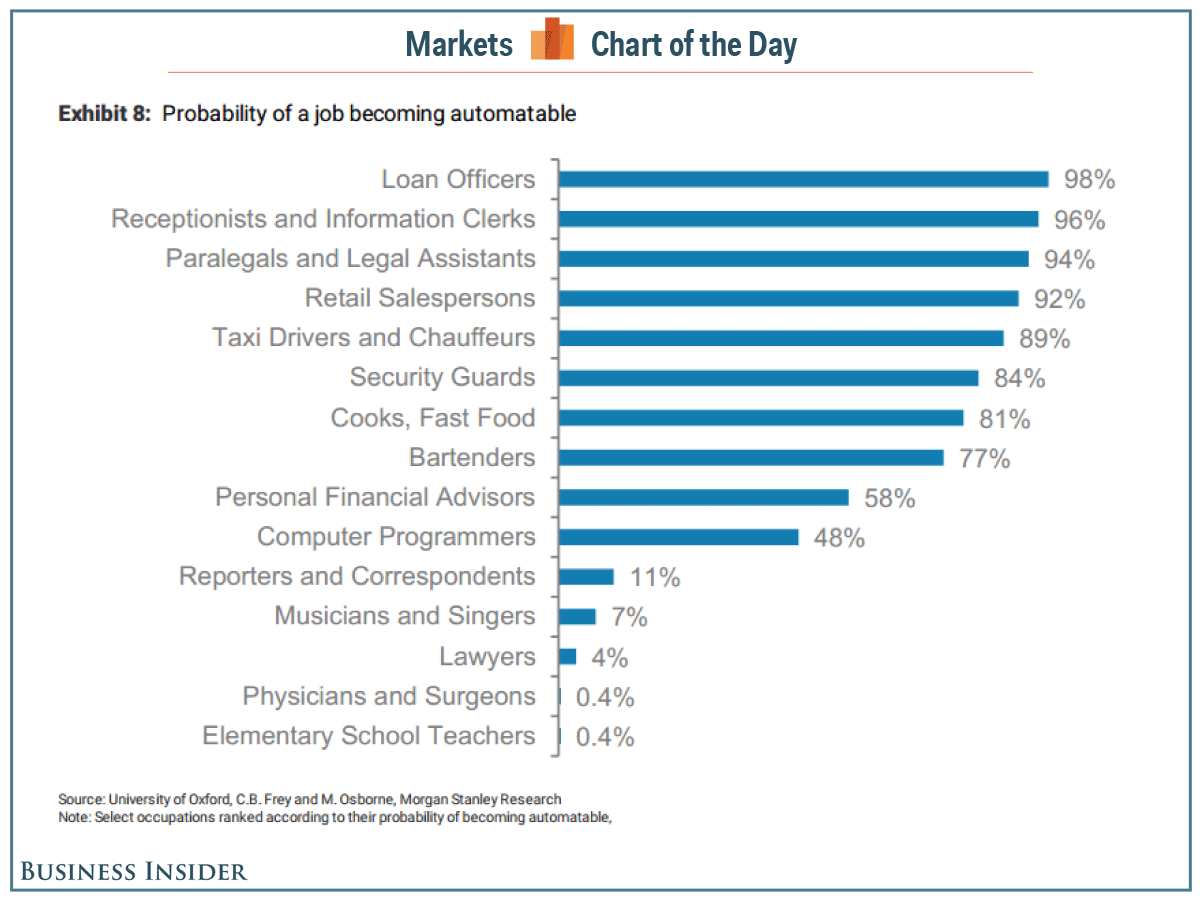 If you're in any doubt that job security is going to be increasingly based on skillset and knowledge rather than, say, picking a lucrative industry, check out the varying fortunes of lawyers and paralegals on the chart. While the former has an extremely low risk of being disrupted in any serious way by technological trends, the latter—whose work often involves relatively mundane, repeatable tasks—seems to be in great danger.

And if you're still not convinced, check out the profession right in the middle: computer programmers. While you might think that the people who spend their careers making computers do their bidding should have a risk rate much closer to zero, it seems that many of them may be coding their way out of a job.

How to Stay Connected While Working Remotely

There's no question that technology is changing how—and where—we work. According to a Gallup Work and Education Poll conducted late last summer, the number of employees who telecommute—whether full-time or occasionally—has climbed to 37% of the workforce, up from 30% a decade ago, and four times greater than in 1995, when just 9% of employees telecommuted.

Will Automation Kill Your Job, or Make You Better at It?

With so much news related to matters of genuine weight and import recently, you can be forgiven if you missed one of the latest (and fastest) examples of an emerging technology being adapted for unintended purposes: within days of Pokemon Go hitting the App Store, it was already being used by thieves to attract potential victims to quiet locations where they could be relieved of their possessions at gunpoint.

A trivial change leading to real (and, in this case, frightening) consequences in real-world settings is a theme that can be found with almost any technological shift—from the invention of the printing press to the advent of the Internet of Things, we've been finding new ways to do the things we need more efficiently for centuries.

How to Prevent Machines from Stealing Your Job

There's no denying that robots, artificial intelligence, algorithms, etc. , are increasingly automating tasks that humans have received good money to perform for decades.