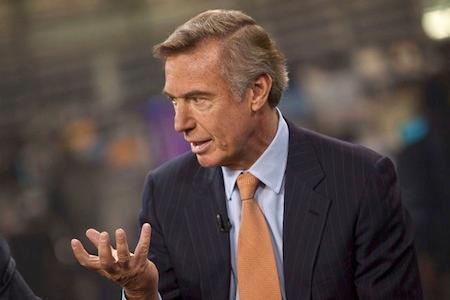 Evercore, which recently ranked No. 4 in the Vault Banking 50 and took the No. 1 spot in Vault's 50 Best Internships, has been killing it in 2015. Its stock has risen 600 percent higher than the S&P 500. Its net revenues are up nearly 40 percent. It promoted more employees than ever in its history. And it had its hands all over the largest technology deal of all time.

Evercore Partners Inc. Chief Executive Officer Ralph Schlosstein said when he sees a banker with a proven track record, his instinct is to bring the dealmaker on board even if there isn’t a job opening.

“Great bankers will figure out a way to make money,” Schlosstein said Tuesday during a conference hosted by Goldman Sachs Group Inc. “I once read a really great quote from Siegmund Warburg, and he was asked, how did he have so many great bankers at S.G. Warburg. And he said, ‘It’s very simple. I look at a great banker the way I look at a nice tie. If I see it, I buy it whether I need it or not.”’

Another part of the answer rests in the fact that Evercore, like a couple other mid-sized Wall Street firms like Lazard and PJT Partners (formerly Blackstone's banking unit), has a business model that can cushion the blow of low profits during bear markets.

“We have a benefit that you at Goldman Sachs don’t have, and that’s when things get a little tougher, we have a restructuring business,” Schlosstein said. Restructuring work generally picks up during economic slumps when there might be fewer banking opportunities tied to mergers and acquisitions. “One of the things that we can say to high-talent bankers is, ‘there’s more that you can do here in a down cycle.”’

An interesting aside, which might shed some light on Evercore's culture (which always receives rave reviews from Evercore bankers who take Vault's annual banking survey), is Schlosstein's atypical career path to Wall Street CEO. He did his undergraduate work at the small liberal arts and sciences school Denison University in Ohio, and received his master's in public policy from the University of Pittsburgh. After that, for many years, he worked in several high profile government positions, including deputy to the assistant secretary of the U.S. Treasury Department and associate director of The White House Domestic Policy Staff under Jimmy Carter.

In the 1980s is when Schlosstein began working in finance. He worked as an MD in investment banking with Lehman Brothers, then went on to found investment management behemoth BlackRock, where he served as president for two decades before leaving to start an alternative asset management firm. In 2009, he was named Evercore's CEO, taking over the reins from another man who first served his country before moving on to finance: Evercore Founder Roger Altman, who once held the position of Deputy Treasury Secretary under Bill Clinton.

In any case, if nothing else, Schlosstein's jagged journey to the head of one of the most prestigious investment banks in the country, if not the world, should serve as a reminder that there's no straight path to the corner office with the best views. At least not on Wall Street there isn't.

This past summer, Vault surveyed more than 5,800 interns at 102 different intern programs. We asked current and former interns to rate and review their internships in five areas: the application process, compensation and perks, quality of life, meaningfulness of assignments and training, and full-time employment prospects.

50 Best Banking Firms to Work For

Read More:
Thanks to Goldman, Wall Street Work-Life Balance Is Better Than Ever
Is Wall Street Getting Less Diverse?