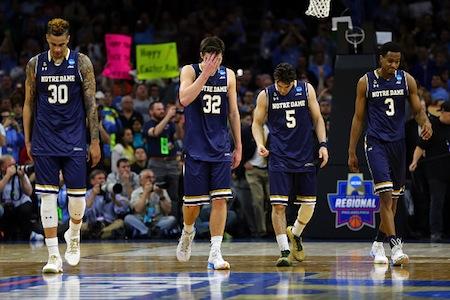 If you've been following the NCAA Basketball Tournament, you know that there are only four teams left. This means that 64 of the 68 teams selected to play in the tournament have lost, and thus, in some way, 64 teams have failed. Soon, three teams of the so-called Final Four will also lose and thus will also fail. Which means that 67 teams or approximately 1,340 people (each team includes about 15 players and five coaches) will experience some level of failure when the final shining moment is played and the screen goes black on another Division I college basketball season.

On the other hand, one team will win, and thus approximately 20 people will not experience failure. Which is really unfortunate for them. It's unfortunate because these players and coaches will be the only competitors in the NCAA Tournament who will not learn anything. Or, at least, will be the only people unable to use their experience in the tournament to answer that ubiquitous (and stress-inducing) interview question: "Tell me about a time you failed and what you learned from it."

I thought about this question while listening to an old radio interview with the late author Pat Conroy. Conroy, who died earlier this month, wrote several books made into movies, including The Prince of Tides (starring Nick Nolte and Barbara Streisand) and The Great Santini (starring Robert Duvall). Conroy, before he was a writer, was also a decent college basketball player. He played for the Citadel in Charleston, S.C., under, incidentally, a verbally abusive coach who used "magnificent profanity" and whom Conroy immortalized in two of his books, one of which was a novel entitled The Lords of Discipline (also made into a movie) and the other was a memoir entitled My Losing Season.

A few years ago, Conroy was interviewed by NPR's Terry Gross, and, upon Conroy's death, NPR re-aired the interview. In the course of the interview, Gross asks Conroy to expand on something he wrote about in My Losing Season. That something was what he'd learned from losing. Here's what Conroy says in response:

The thing that's always been a theory of mine that doesn't sit very well in America is: I don't think you learning anything from winning. You just jump up and down, it's wonderful, it's fabulous, it's glorious. But losing … there's a deeper music in loss, there really is something about losing that makes you have to figure out what you did wrong. You have to change the way you played. You have to look at yourself in a different sort of way. Losing seemed to prepare me for life. Bad reviews. My mother dying. There was nothing about my mother's death that reminded me anything about winning. But it did remind me of how I felt whenever I'd lost.

Specifically what came to mind when I heard this Conroy quote was 1) how true this has been in my experience (that I've learned nothing from winning and a lot from losing) and 2) what a good interview question that that commonly asked "failure" question really is. That is, it struck me that it's no fluff question meant to trip you up by surreptitiously getting at some weakness of yours. And instead it's used (or should be used) to probe you to find out if you really do learn from your mistakes and, if so, how you learn from them, as well as how you might be able to grow as an employee and thus how you might be able to help advance the company to which you're applying. The question might also gauge how self aware you are, how honest and trustworthy you are, and how adventurous, bold, and risky you are.

I also thought about how, in order to prepare for this question, you really need to give your answer some serious thought. You need to reflect. You really need to go back to those times when you failed, whether they be at work, in a sport, in an academic, in a relationship, or in some other activity. And you should ask yourself (and then be able to provide yourself with an answer): What did this failure feel like? Was I disappointed? Sad? Heartbroken? Distraught? What happened as a result of this failure? Where did it lead me? How did it change my thinking? My actions? What did it teach me about myself? What did I do differently afterward? What did I have to do to change? How did I go about changing? And what do I now do differently and/or hope to do differently? And probably a host of other questions that I'm failing to think of at the moment.

In any case, when you answer this question make sure to 1) answer it (some interviewees will do the worst possible thing and not answer it, and trust me, if you are older than four years old, you have failed); 2) answer it honestly (be sincere, and make it a true failure, not something like "I received an A-, my only A- in my college career, in Econ 407 and thus I learned … "); and 3) concentrate your answer on the second part of the question, which is to say focus not on the failure itself but on the things you've learned and how you've grown and altered the way you look at yourself and/or you look at a topic and how, now, you do something differently as a result of your failure.

The truth is, which experienced employers and employees know well, you will fail at some point on the job, and so interviewers want to know how you will deal with that failure and if you will truly learn and grow from it, or if you will shut down and shrivel up. Ideally, if asked this question, you will want to get across that you are resilient, that you will not let failure stop you, and, in fact, will use and have used failure as a way to progress, grow, develop, change, and learn.

What also might be helpful, or at the very least inspiration, is to listen to the Conroy interview in its entirety. But if you don't have 36 minutes to spare, I urge you to spare six. Start at the 19:40 mark and listen for the following six minutes. In that time, you'll hear, among other things, the most valuable lesson Conroy learned in his basketball career, which was a direct result of playing for that aforementioned abusive coach. It was a lesson that not only helped Conroy come into his own as a basketball player, but was also essential to Conroy's future success as a writer.

Read More:
5 Interview Mistakes and How to Avoid Them
42 Big Four Interview Questions
Beware of This Breakfast Interview Trick

This year, in our annual accounting survey, Vault surveyed more than 9,000 accountants. The survey, administered this past winter, asked accountants to tell us what it's like to work for their firms.

The job search is a stressful experience, especially if you don’t currently have a job. One mistake – a spelling error, a poorly worded email – feels like your world is coming to an end.

Beware of This Breakfast Interview Trick

If you ever have a breakfast interview with Walt Bettinger, the CEO of financial services giant Charles Schwab, beware of receiving the wrong order. That is, don't be surprised if you receive eggs over easy with a side of bacon when what you actually ordered was French toast with home fries.