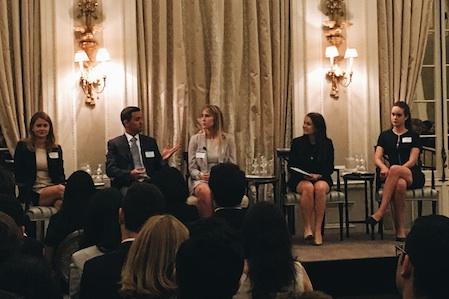 The full-time finance professionals took part in two panel discussions focused on best practices for making the most of the all-important summer internship. On hand to moderate the panels was Vault Managing Director Claudia Grillo (who once upon a time interned for Vault), and chairing the event was Vault Executive Consultant in Recruitment Marketing Beth Burrus.

When Laney was asked about how her internship responsibilities evolved over her summer with Morgan Stanley, she said that at first she was mainly helping make her manager's job easier. That is, she was mostly only working with her manager. But as time went on, she began to work on team assignments as well, so she had to learn how to manage her time between the two types of work.

Later, when discussing how to turn an internship into a full-time job, Laney said, "It's important to articulate what you're interested in, in order to distinguish yourself from the other analysts in your class."

And as far as common pitfalls and how to avoid them, Laney warned the interns in attendance to watch what they say at all times. "Always be aware of who you're talking to," she said.

When asked about the adjustment from school to summer internship, Evan said, "You find out very quickly that some of the things that worked at school won't work on the job." This includes the way you manage time, because, he noted, it's not easy to predict what kind of work will arise during your internship, whereas at school your projects and required work are fairly predictable. So, he said, "You have to find a new approach."

Later, when discussing common mistakes interns make, Evan noted you should always think ahead before you ask questions. It's certainly okay to ask questions when you don't know something, he said, but "you always want to ask questions in an intelligent way."

He also gave this good advice: Rather than going to your manager or analyst every time you have a question, try to plan ahead and think about the project you're working on and try to predict the questions you'll have in order to complete it. "And then go in with a list of five questions." He added, "The worst thing you can do is get to a point in the project where you can't continue [because you don't know something] and just sit there doing nothing for a day. That's counter-productive. And people will notice."

Finally, when asked about how to make sure you turn your internship into a full-time job, Evan said, "There's one way to get an offer, and tons of ways not to." Expanding on that, he said that "you don't have to be the smartest person," and that the one way to get an offer is to "use your brain, have a good attitude, and bring some professionalsm." If you do that, "you'll be fine." As for the tons of ways not to get an offer, according to Evan, they include embarrassing yourself by saying something about a manager when you think they hung up on a call, emailing the wrong document to the wrong client, emailing the wrong person, etc.

When Christina was asked about how to go about asking questions when you don't know how to do something, she said, "Do your research first and then ask a fellow intern." She added that chances are someone else in your intern class has come across the same question. Christina also noted that you should never be afraid to ask questions, and recommended being proactive about finding the answers to questions you have. Like Evan, Christina stressed the importance of asking questions in an intelligent way.

When asked about navigating the divide between wanting to stand out among your intern peers and being a team player, Christina stressed the importance of showing that you work well in teams and not coming across as a self-promoter. "If you're being cutthroat to get ahead, no one's going to want to work with you." And people wanting to work with you is very important when it comes time to the firm deciding to give you a full-time offer or not.

Paige recommends that interns pace themselves during their internships. "It's a marathon, not a sprint," she said.  Paige also stressed the importance of "having a great attitude," and "showing enthusiasm and that you're excited about doing the work." Because, like Christina pointed out, it's important for others to feel that they "love working with you" when it comes time for the firm to decide if they're going to extend you an offer or not.

When Jacqueline was asked about how to set yourself apart from your fellow interns, she said to "make sure that others know you have a special interest or talent." As an example, early on during her internship, Jacqueline told her fellow interns that she had experience in Excel and that anyone could feel free to come to her with modeling questions they might have.

Unlike the other panelists, Jacqueline isn't working full time for the same firm she interned with. She was open with the audience about this, noting that her relationship with her manager during her internship was not the best, and the job itself wasn't a good fit for her. This experience played into some of the helpful advice she gave last night. This included starting to think about what you want to do full time during your internship, and being brave if your internship doesn't seem like a good fit.

"It's not the end of the world," Jacqueline said of not receiving an offer at the end of your internship. "If I would've gotten the offer, I would not have been happy." She added that it's important to stay in touch with other firms that you interviewed with and you didn't end up interning for. Which is exactly what Jacqueline did and how she landed at BlackRock. "I'm glad I did," she said of reaching out to BlackRock when she knew her internship was not a good full-time fit for her.

How International Students Can Get Visas and Get Hired

Marcelo Barros is a University of Oregon graduate originally from Brazil. In the U.S.

Although working for a bulge-bracket investment bank is no longer a model-and-bottle proposition, it’s still one of the most lucrative first jobs you can get right out of college or MBA school. And if you want to land at Goldman, one of the Morgans, Credit Suisse, Deutsche Bank, Barclays, or BofA, you’re likely going to have to get in through the summer door.

27 Interview Questions That Weed Out the Weak on Wall Street

If you're preparing to interview for a position in investment banking, sales and trading, or investment management, it's likely you've already practiced answering a host of interview questions, including: What are your strengths and weaknesses? Why do you want to work for this firm in particular?