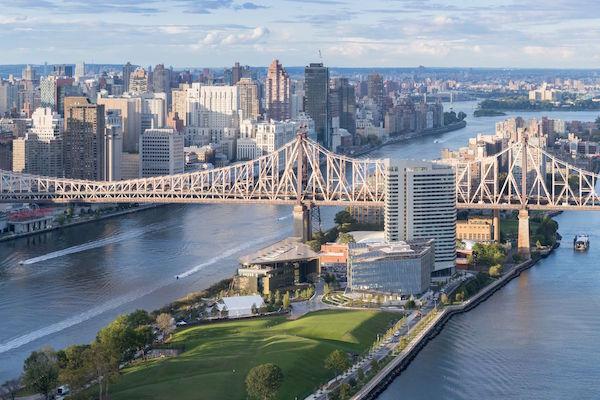 Last week, Cornell Tech began its first semester of operation. The new graduate tech school on Roosevelt Island in New York City is a joint venture between Ithaca, N.Y.'s Cornell University and Haifa, Israel's Technion-Israel Institute of Technology. The two universities together won the bidding when, in 2011, then-New York City Mayor Michael Bloomberg put out the invite to universities worldwide to bid on creating a new campus in the city. Here's the former mayor speaking more recently (this past week, in fact) about the impetus behind the asking and bidding.

“High-tech companies and new, small companies that will be the next big companies, they tend to be created where the founders go to school,” the former mayor Michael R. Bloomberg said in an interview. “You see that in Silicon Valley. Here was a chance to get a bunch of people educated and create the economy of the future for New York City.”

To create that economy, Cornell Tech will offer about a dozen masters and Ph.D. programs in fields like information science and electrical and computer engineering. It has been operating out of the Google building in the Chelsea neighborhood of Manhattan since 2012. This will be the first academic year the institution, which now has about 300 students and 30 faculty members, will have its own home.

The groundbreaking of the school is very good news for New York City, especially for its citizens and would-be citizens interested in working in the tech industry. Cornell Tech could go a long way toward making the city's tech industry (so-called Silicon Alley) the place of choice for tech-minded workers, entrepreneurs, and venture capitalists, putting a dent into or erasing Silicon Valley's dominance.

Already, NYC is a formidable competitor to metro San Francisco and metro San Jose when it comes to tech. Consider these stats (via Bloomberg, the news organization the former mayor founded).

The two California metro areas had around 365,000 jobs in those seven sectors as of late last year, vs. 280,000 for metro New York. The Californians were way ahead in computer manufacturing and software publishing, more than offsetting the New Yorkers’ edge in computer systems design and related services and scientific R&D services. And that’s in spite of New York having a much bigger population.

How Cornell Tech could quickly affect this battle between the coasts and push No. 2 Silicon Alley over No. 1 Silicon Valley is this: if Cornell Tech grads go on to create the next monstrous tech firms. The lack of such monstrous NYC-headquartered tech firms is why Silicon Valley, at least one of the reasons, is still a solid No. 1.

A big deficit for New York is the lack of a hugely successful homegrown company that has gone public, minting millionaires and billionaires who use their wealth to develop more tech startups. New York’s successful startups are on the scale of Etsy, Trello, and Tumblr. “The PayPal, Google, Facebook mafias of the Valley—there is not a similar thing here,” says Anand Sanwal, chief executive officer and co-founder of New York-based CB Insights.

Of course, time will tell how Cornell Tech will affect the tech industry, including tech careers and jobs. In the meantime, if you're interested in getting to know more about Cornell Tech, including the various programs it offers and how to apply, check out its website here.

Why Are Millennials Less Likely Than Gen Xers to Hate Their Jobs?

Are you over the age of 35 and hate your job? If so, you're not alone.