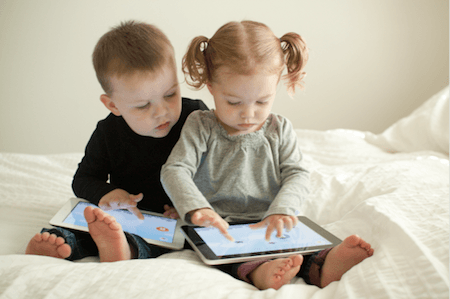 Here’s a scene you can witness at any number of New York City restaurants any night of the week: A mother sits down with her two young kids, and before menus are brought out, the mother hands the kids matching iPads. The kids then proceed to play video games through their entire meal, looking up just once or twice from their respective screens, only to drink some water or fill their mouths with food they're too busy to taste. Meanwhile, during her meal, the mother has her face locked onto her screen, a paperback-sized smartphone, as she feverishly sends texts and emails, most of which are work emails that she believes must be responded to immediately.

Of course, as a witness to this scene, it’s not too difficult to see the problem—no one’s experiencing the reality of the situation (no one’s even tasting their food), and no one’s connecting to anything human (no one’s speaking with each other). What might be more difficult to see is that the lead actor of the scene—the mother (this could very easily also be a father, of course)—is required to field these texts and emails or feels as though she must as part of her job. And perhaps her significant other is still at his/her place of employment, and so she has to do something to occupy her kids while she continues to work through dinner. And what else does she do but enlist the easiest (but by no means the best or cheapest) babysitter invented by man or woman: the iPad.

I present the above in the wake of a recently aired PBS documentary that looks at the effects of screen time on children in China, where Internet addiction is now considered a clinical disorder.

Excessive use of computer games among young people in China appears to be taking an alarming turn and may have particular relevance for American parents whose children spend many hours a day focused on electronic screens. The documentary “Web Junkie,” to be shown next Monday on PBS, highlights the tragic effects on teenagers who become hooked on video games, playing for dozens of hours at a time often without breaks to eat, sleep or even use the bathroom. Many come to view the real world as fake.

And the amount of time that kids are spending in their fake realities is pretty staggering.

In its 2013 policy statement on “Children, Adolescents, and the Media,” the American Academy of Pediatrics cited these shocking statistics from a Kaiser Family Foundation study in 2010: “The average 8- to 10-year-old spends nearly eight hours a day with a variety of different media, and older children and teenagers spend more than 11 hours per day.” Television, long a popular “babysitter,” remains the dominant medium, but computers, tablets and cellphones are gradually taking over.

How screens might affect very young children should scare you (it does me). And I’m constantly amazed by how many kids in strollers are being entertained by screens while their parents swipe away on their own screens.

Before age 2, children should not be exposed to any electronic media, the pediatrics academy maintains, because “a child’s brain develops rapidly during these first years, and young children learn best by interacting with people, not screens.” … There can be physical consequences, too. Children can develop pain in their fingers and wrists, narrowed blood vessels in their eyes (the long-term consequences of which are unknown), and neck and back pain from being slumped over their phones, tablets and computers.

Of course, our children’s screen time isn’t all a result of our heavy workloads (or our own screen addictions), but it sure isn’t helping to lessen it.

As for how to fight against the effects of screen time, experts say parents need to unplug themselves, then unplug their kids.

According to Outsmarting the Smart Screens: A Parent’s Guide to the Tools That Are Here to Help, written by two experts at the Harvard School of Public Health, “Since the devices can be turned on anytime, you as a parent need to monitor their use, keep track of time, and then make sure the agreed upon rules are followed.”

Which is easier said than done when there are hundreds of messages to deal with that “require our immediate attention.” However, if we can be mindful of the effects on young minds of our inattention (to our children) and our attention (to our messages), maybe we’ll be okay with ditching the screens for a few minutes, looking at the menu, having some dinner conversation, tasting our food, and then getting back to work when the kids are in bed.

Read More:
Tricked-Out Cadillacs Are the New Corner Office
The One Job Robots Can’t Do (Yet)
Top 10 Tech Startups to Work For in NYC

You’ve probably heard about (if not ridden in one of) those vans equipped with Wi-Fi and other amenities that cart the average tech worker at Facebook and other companies to their respective jobs in Silicon Valley. But what about the big swinging managers at the top of those firms?