5 Skills Data Scientists Need to Get Hired and Earn More 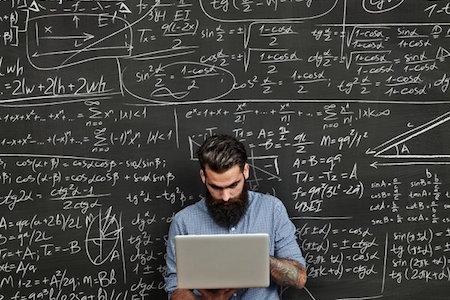 For students and professionals looking to launch a career in data science, there's no shortage of lucrative opportunities. According to McKinsey research, wages for data scientists grew 14 percent over a recent two-year period, eight times faster than the average U.S. wage growth. In fact, the same McKinsey report speculates the U.S. data scientist shortage will reach the staggering height of 250,000 open positions by 2024.

Data science professionals currently earn an average annual wage of $100,000, and some earn more than $300,000 annually. What's the difference between these "average" and "above-average" earners in the data science field? As it turns out, it's tech skills. Research by O'Reilly reveals that data scientists using 15 or more tools (five more tools than average) earn $30,000 more than their peers. Which means a solid technical tool kit is among the most important things data scientists can have in their arsenal.

To help inform your continuing education, we've curated a list of the top data science skills and education. We also share some insights on how demand for these skills will be trending in the months to come.

In order for your analytics to drive value for your employer, you have to be able to understand the insights. High-quality visualization can transform complex manipulations into real, actionable information that executive teams can use to make business decisions. In fact, data visualization is among the most sought-after skills in STEM today.

Tech recruiter Linda Burtch has experienced the spike in demand for individuals who can translate insights into visuals, stating, "It's so critical because a lot of quantitative candidates ... forget that they're answering business problems." So, developing familiarity with multiple tools for visualization is a smart move for job candidates.

Various NoSQL technologies are at the top of the skills shortage, with one of the most popular open source databases currently sitting at the second most highly paid technical skill. A recent report by DataStax revealed that highly qualified job candidates with skills in "Hadoop, MongoDB, SQL Server and Oracle" could also benefit from more knowledge of NoSQL options.

In case you're concerned the NoSQL craze has hit its peak, it almost certainly hasn't. Information Age reports the technology is just hitting the mainstream. In many use cases, document and graph-based data storage technologies are increasingly the most effective way to manage fast-moving streams of data from mobile technology and other connected devices.

"Familiarity with data storage is at the top of the desired skills" for today's data scientists, according to CrowdFlower CEO Lukas Biewald. Along with NoSQL, individuals with skills in Hadoop and the Java used to power this storage technology are going to face minimal competition for well-paid job openings.

In fact, there's evidence that entire industries are suffering because they can't find individuals to wrangle Hadoop. One recent report indicated that the maritime sector in Singapore is seriously lagging in big data adoption, a fact they attribute to too few individuals with big data storage knowledge.

Artificial intelligence and internet of things (IoT) devices are generating incredibly high velocity streams of data. More data demands more precise analyses, which has lead to a nearly 200 percent growth in demand for professionals with machine learning expertise. "There is still a pronounced shortage of talent," says Gary Kazantsev of Bloomberg, adding, "In fact, it is getting worse."

If you've got an engineering or math background, you're at an advantage already. The ability to develop custom machine learning models requires programming knowledge and strong mathematical skills, including probability and linear algebra. Aspiring data scientists should develop familiarity with data science tools for machine learning, including the ability to build custom models, assess model performance, and optimize performance with validation techniques.

Data scientists are called upon to solve professional problems. Their technical skillset needs to involve enough knowledge and tools to efficiently report their findings in a way that non-technical members of the leadership team can understand the insights.

Looking back at her first executive role managing a data science team, Kate Matsudaira recalls feeling pressured to produce more work faster. However, she knows where they went wrong, and it was missing "a process that would support our future work." This is where workflow mapping and tools come into play.

In real-world scenarios, you may commonly be asked to reiterate previous projects, repeat calculations with a different dataset and perform other minor adjustments. Being able to leverage your prior work is critical to getting stuff done. By gaining familiarity with leading tools for data workflow, professionals can achieve massive amounts of efficiency in their results.

Despite the fact that "big data" has officially fallen off the Gartner hype cycle, it's definitely here to stay. In fact, corporate datasets are only getting bigger, as organizations increase their adoption of mobile insights and IoT analytics.

If you're aspiring to work in data science, you're unlikely to face any shortage of opportunities in the near future. By expanding your knowledge of data science tools and developing some of the most in-demand technical skills, you'll drastically increase your odds of scoring a highly prized position.

Vivian Zhang is the founder and CTO of the NYC Data Science Academy and an adjunct professor at Stony Brook University. She formerly worked as a senior analyst and biostatistician at Memorial Sloan-Kettering Cancer Center and as a scientific programmer at Brown University. A data scientist, she earned her M.S. in Computer Science and Statistics and B.S. in Computer Science.

Top 5 Skills Needed For a Job in Software Development

Software development is one of those areas that seems a mystery to those outside it. Coding, by definition, is another language, and by nature it excludes those who don’t understand it.