The State of Gender Equality on Wall Street in 4 Charts 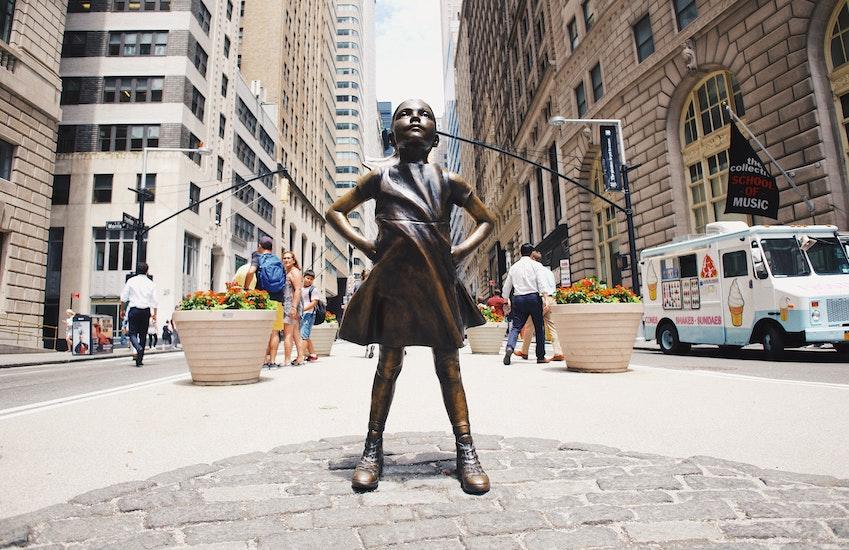 Each year, Vault surveys thousands of investment banking professionals, asking them to rate their firms in several workplace categories. Today, on Women's Equality Day—which commemorates the passing of the 19th Amendment, giving women the right to vote—we took a close look at the differences between how male and female professionals rated their firms in our annual Banking Survey over the past decade. Our aim was to capture a snapshot of the current state of gender equality on Wall Street and find out how gender equality has changed (for the better or worse) over the past 10 years. Below, in four charts, is a summary of what we found.

1. Commitment to Diversity with Respect to Women 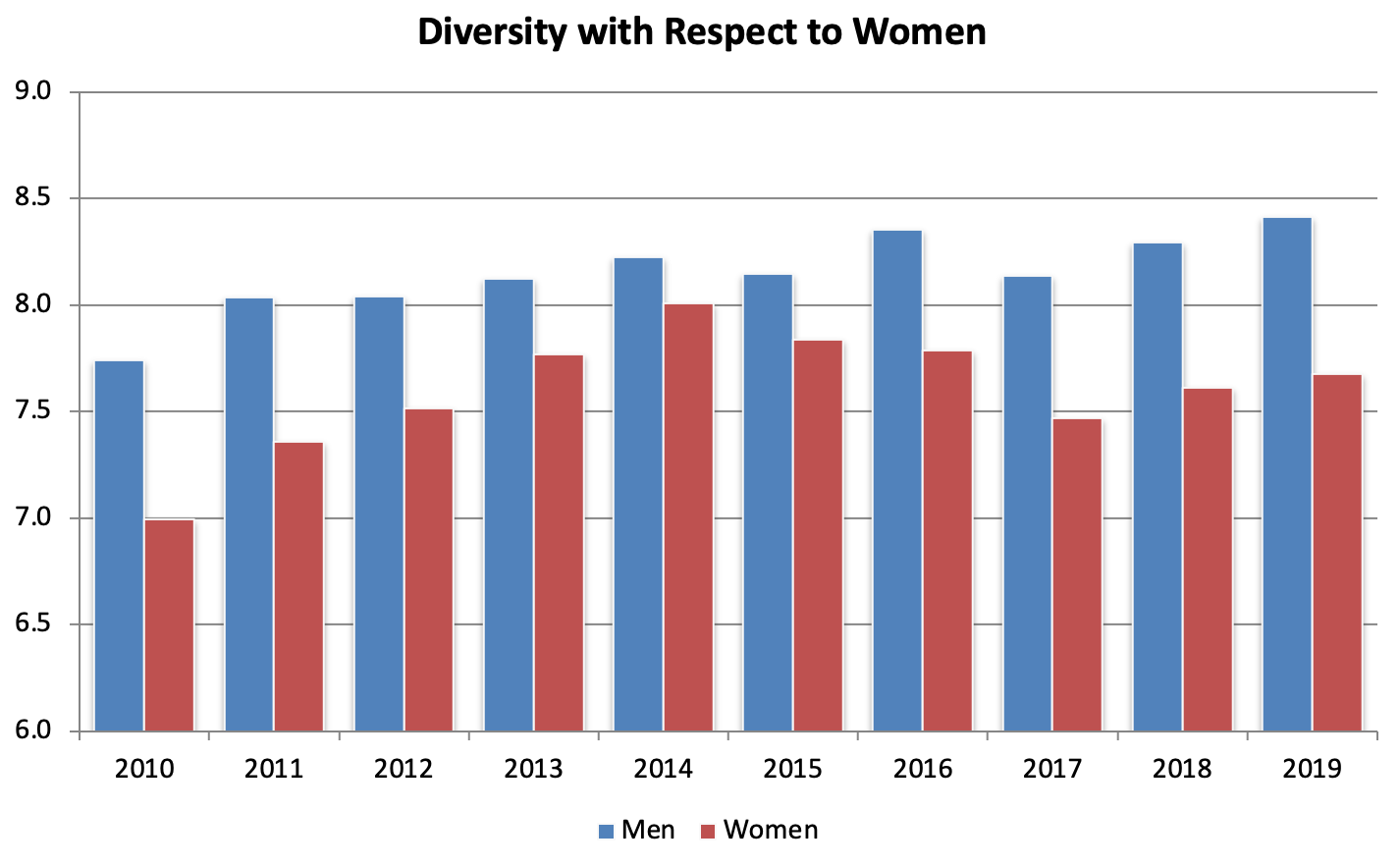 In our annual survey, we ask bankers to rate their firms in racial diversity, LGBTQ+ diversity, and diversity with respect to women. When we ask about gender diversity, we specifically ask banking professionals to rate their respective firm's "commitment to diversity for women" on a scale of 1 to 10, where 1 is "needs a lot of improvement" and 10 is "exceptional."

And indeed, in the past few years, Wall Street firms have been focusing on expanding their diversity affinity groups and networks, and going to lengths to ensure that entry-level analyst and associate classes have high ratios of women to men. In fact, more than a few firms' analysts classes now have an equal number of women and men. However, it's somewhat disappointing that ratings given by women in this category peaked in 2014 and have dropped 4 percent since.

Also disappointing is the gap between men's and women's ratings. In 2014, the gap was just over 2 percent, but in 2019, our latest survey, the gap widened to nearly 9 percent—a nine-year high. Which signals a significant disconnect between how men and women view gender equality initiatives at their firms.

2. Quality and Utility of Informal Training and Mentoring Programs 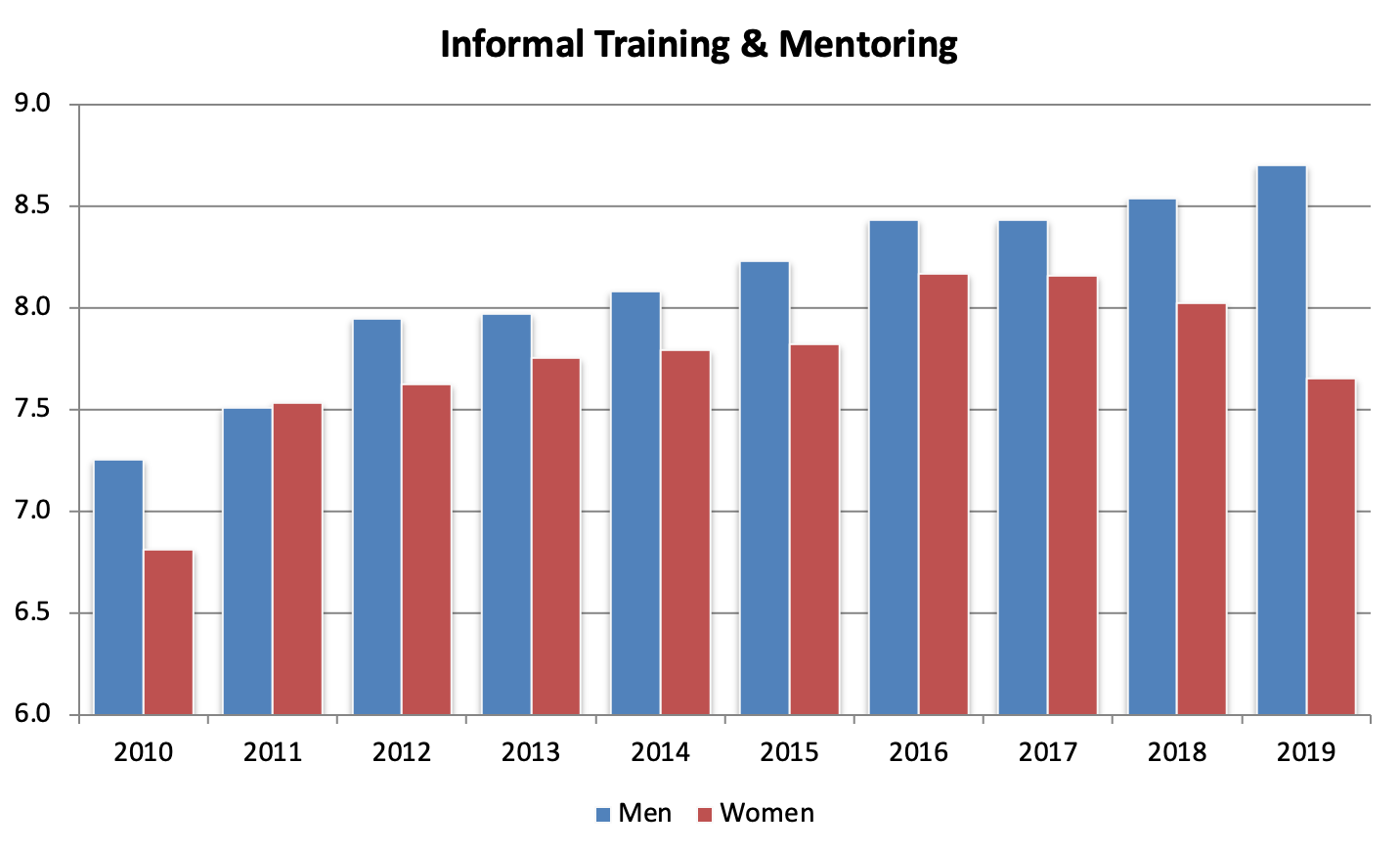 As you can see in the above table, from 2010 to 2016, there was a strong upward trend in the ratings that both men and women gave their firms in this category. However, since then, there's been a steady downward trend in women's ratings, while men's ratings have risen. This doesn't bode well for two reasons.

One is the obvious fall in ratings that women have given their firms. Women's ratings peaked in 2016 at 8.168 and have fallen by 7 percent since then to 7.656—a seven-year low. The second is the rising gap between men's and women's scores. In 2016, the gap was just 3 percent, but now, just a few years later, it's nearly 14 percent. That's a huge gap, signaling that there are major differences between how men and women experience on-the-job training and mentoring at their firms. 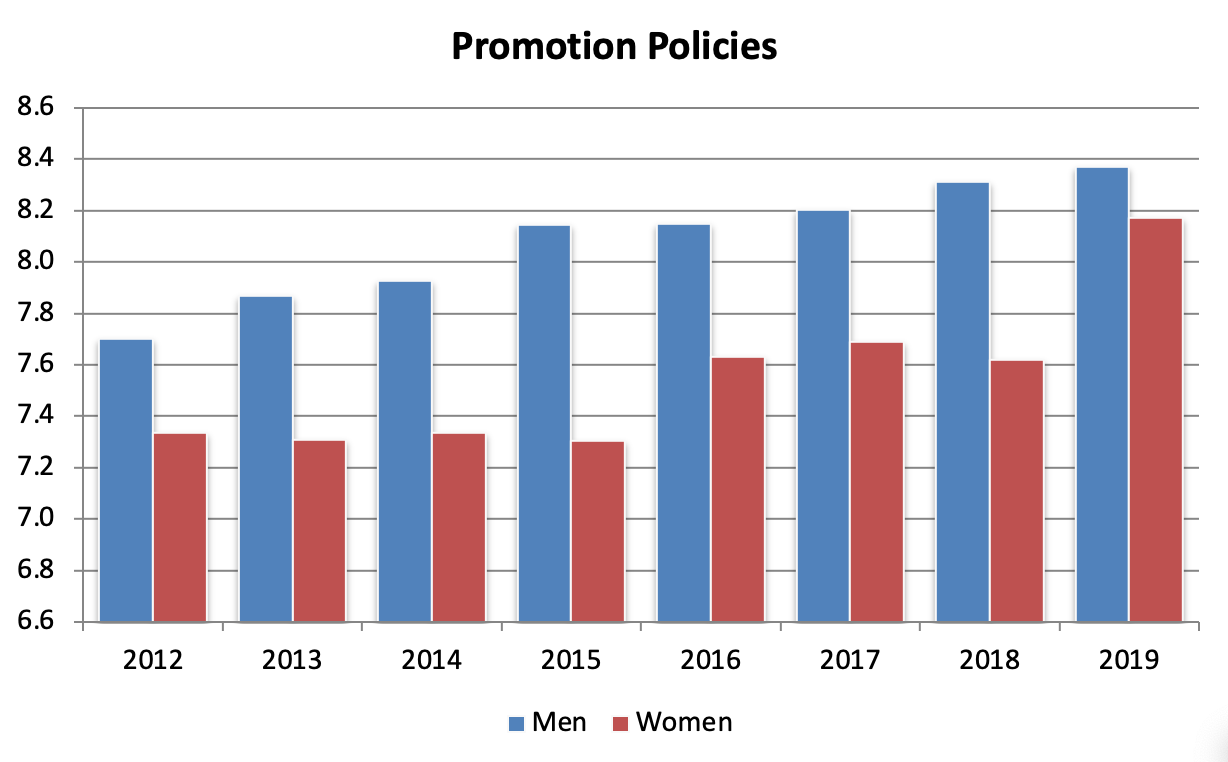 When we ask about promotion policies, we specifically ask professionals to rate their satisfaction with their firm's promotion policies on a scale of 1 to 10, where 1 means "very dissatisfied" and 10 means "very satisfied." This category, like informal training and mentoring, is a good indicator of how firms are doing when it comes to offering opportunities to rise into leadership positions.

In fact, women's scores rose 7 percent in a single year, and while there was a 9 percent gap between men's and women's ratings in 2018, that gap narrowed to 2 percent in 2019. Which is very encouraging, possibly pointing to good news in the coming years for women when it comes to rising Wall Street's ranks. 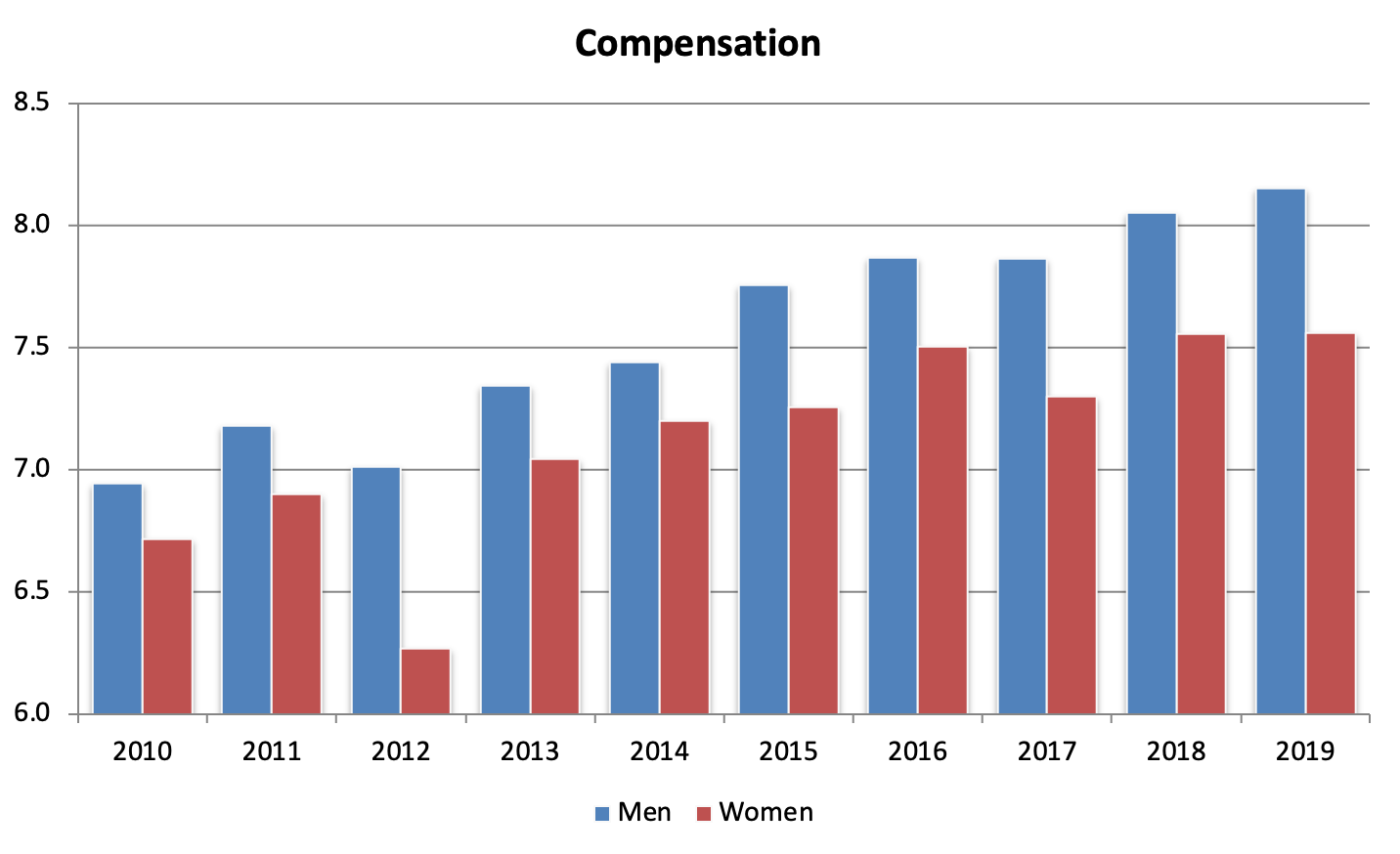 As illustrated in the table above, there's a general upward trend in both men's and women's ratings over the past decade. Which indeed is a positive sign for women and for gender equality. However, the table also illustrates the increasing gap between men's and women's ratings, from 3.4 percent in 2010 to 7.8 percent in 2019. While this gap merely represents the difference in "satisfaction with comp" and not actual comp amounts, it points to a problem still facing women on Wall Street: the lack of pay parity. By some recent counts, women still make nearly 30 percent less than their male counterparts on the Street.

Also of note in the above table is the nosedive ratings took in 2012. This was, in large part, due to the nosedive in bonuses in 2011 thanks to the financial crisis, which caused a recession. It was a time when banks didn't have much cash on hand, meaning bonus pools were dry. It was also a time when banks began experimenting with bonus clawbacks and putting a high percentage of bonuses in stock, neither of which were very popular with bankers.

Although what the latest economic setback—the global pandemic—will do to banks' bottom lines in the next few quarters remains to be seen, the second quarter of 2020 was certainly a dark one for most banks. However, there were some bright spots.

Although the general upward trend in women's ratings in our surveys over the past decade is a sign to cheer, the rising gap between men's and women's ratings is a sign to fear. Indeed, judging by the above, Wall Street has been making progress when it comes to gender equality but still has a long way to go when it comes to achieving true equality.

The takeaway here is that although our surveys are by no means complete demographic representations of investment banking in a given year, the low percentage of women taking our surveys indicates that the industry needs to work a lot harder when it comes to hiring, retaining, and promoting women.

The Most LGBTQ-Friendly Firm on Wall Street

It's hard to believe that, last week, in 27 U.S. states, it was legal to fire employees solely based on their sexual orientation—if they they were gay, bisexual, or transgender.

6 Financial Pivots to Make in the Age of Covid-19

Given the mounting job losses, stock market volatility, and general economic uncertainty, it’s easy to worry about your money and be confused about what to do with it. Of course, everyone’s financial situation is different, but there are certain actions to take that can benefit almost anyone.

Today, Vault releases its Banking 50 Rankings for 2020. The rankings are derived from Vault’s annual Banking Survey.