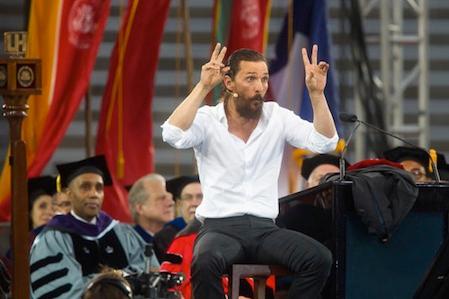 More recently, the wild eyed and wild bearded McConaughey visited the University Houston to dole out some career advice to the graduating class of 2015 (and was paid $135K to do so). And his 45-minute commencement speech was something to behold. It was at turns weird, laugh out loud funny, cringe-worthy, downright indecipherable, incredibly helpful, and very uplifting. And at every turn it was extremely entertaining. In fact, it was the most entertaining of any commencement speech I've seen or read this graduation season.

And so, I'd urge all and sundry to read the speech in its entirety when you have the time. For now, below is a choice section of the speech, a section which seems to embody McConaughey's tactics when it comes to speech making: create a numbered list of talking points, speak about my first film, be funny, be real, be Texan, be informal, be humble, make fun of myself, send a direct and somewhat clear life lesson to my fans, improvise, use airquotes liberally, etc. (Side note: As you read McConaughey's speech, tell me you can't envision him late at night, somewhere in the desert, a tallboy in his fist, another dead tin soldier being carved into a strange sculpture, as he hammers out notes on a beat-up Smith Corona about what he wants to tell the class of 2015.)

5. Process of elimination is the first step to our identity (a.k.a where you are NOT is as important as where you are)

In 1992, I got my first job as an actor. Three lines, three days work, in a film called Dazed and Confused. Alright.

The director, Richard Linklater, kept inviting me back to set each night, putting me in more scenes which led to more lines all of which I happily said YES to. I was having a blast. People said I was good at it, they were writing me a check for $325 a day. I mean hell yeah, give me more scenes, I love this!! And by the end of the shoot those 3 lines had turned into over 3 weeks work and “it was Wooderson’s ’70 Chevelle we went to get Aerosmith tickets in.” Bad ass.

Well, a few years ago I was watching the film again and I noticed two scenes that I really shouldn’t have been in. In one of the scenes, I exited screen left to head somewhere, then re-entered the screen to “double check” if any of the other characters wanted to go with me. Now, in rewatching the film, (and you’ll agree if you know Wooderson), he was not a guy who would ever say, “later,” and then COME BACK to “see if you were sure you didn’t wanna come with him..” No, when Wooderson leaves, Wooderson’s gone, he doesn’t stutter step, flinch, rewind, ask twice, or solicit, right? He just “likes those high school girls cus he gets older and they stay the same age.” My point is, I should NOT have been in THAT scene, I should have exited screen left and never come back.

But back then, making my first film, getting invited back to set, cashing that check and having a ball, I WANTED more screen time, I WANTED to be in the scene longer and more, and come back into the scene right?

Process of elimination. Defining ourselves by what we are NOT is the first step that leads us to really KNOWING WHO WE ARE …

Read More:
What Will Your Career Look Like When You Retire?
Mad Men's Career Girls
Interview Tips From the 2013 Oscar Speeches

What Will Your Career Look Like When You Retire?

One of the reasons David Letterman gave for his retirement from late-night television was his inability to create the type of viral YouTube videos that his younger competitors (Jimmy Fallon, Jimmy Kimmel) have been doing to great success for years. So perhaps it's fitting that one of the best segments of Letterman's final episode was the below music video of sorts that incorporates clips and stills from Dave's 33-year career.

Interview Tips From the 2013 Oscar Speeches

Four score and forty-eight months ago, in the Blossom Room of Hollywood’s Roosevelt Hotel, the first Oscar statues were handed out for outstanding achievements in the motion picture industry. What also occurred that night eighty-four years ago, and what would occur approximately twenty-six fortnights later (the following year), and every year since, is each recipient of an award handed out by the Academy of Motion Picture Arts and Sciences would stand and deliver an acceptance speech, also known as an Oscar speech.