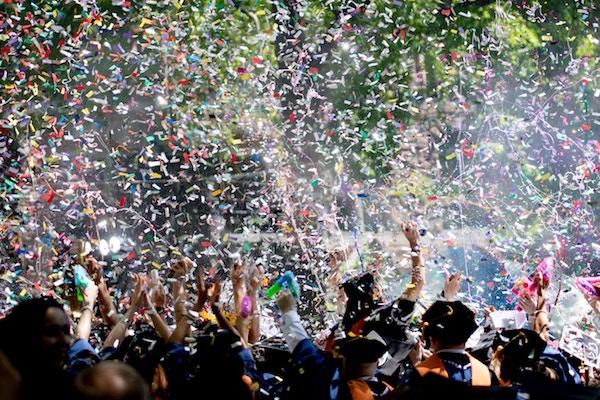 If you're a fan of David Sedaris' essays, you're likely feeling like I am of the 2018 graduating class at Oberlin College: jealous. Jealous because, last Monday, the best-selling author and comic genius delivered the class of 2018 commencement address. In the address, Sedaris gave the class of 2018 much of the wisdom he'd gained in his 61 years. After passing along the brand names of the only two types of scented candles worth buying (both retail for about $100), Sedaris told the crowd of students to be themselves—"unless yourself is an [unpleasant person]." Sedaris didn't use the words "unpleasant person" but a word that rhymes with "tadpole."

Like he does so well in his essays, Sedaris began with humor before veering into serious territory. He followed his scented-candle and be-yourself-unless bits, among others, with two pieces of sound advice that new and old graduates can use immediately, and for the rest of their lives. One was "always have a few jokes up your sleeve." Sedaris explained, "They come in handy at casual get-togethers and probably don’t hurt at job interviews either, depending on what position you’re applying for.”

Indeed, "Tell me a joke" is an interview question that's been asked for decades and is still commonly used today. A joke (a cleaner one than Sedaris would tell) can also be an excellent icebreaker in work meetings, especially those with clients.

The second piece of sound advice Sedaris had was this: write thank-you letters. “People like doing things for people who are grateful,” Sedaris explained, adding, “I’m not trying to be a guilt monger, I’m trying to help you. But who am I? A fairly successful person, one with a Picasso painting and 10 books under his belt who will go home at the end of this day and write the lovely president of Oberlin to thank her for this degree I do not deserve but am so incredibly grateful for.”

Perhaps the most Sedaris-like (contrarian, heartfelt, hilarious, weird) advice that Sedaris has for recent grads is as much for grads' parents as for grads themselves. It's advice that Sedaris passed along (tested) during a recent Late Show with Stephen Colbert appearance.

Sedaris wasn't going for laughs; he was dead serious. He then explained that grads, if they follow his advice, won't have to worry about not making too much money just yet because, "at 22, you're built for poverty." Which is to say, young, healthy, and not a 61-year-old gray-haired man like Sedaris who recently had a tumor removed from his body and then fed it to a snapping turtle (true story).

The point Sedaris was making is that young grads should go after what they believe in and what they truly want. He doesn't want grads' "day jobs" to become their "main jobs," which they so easily can if passions aren't fully pursued. Sedaris was also saying that when you're just out of college, you're indeed physically at your strongest, able to put in the grueling work needed to go after what you really want. That is, you're physically able to suffer for your art (or science). You're able to operate on fewer hours of sleep, walk instead of Uber everywhere, and have a much higher tolerance for cheap meals (or skipping meals) and living in less-than-five-star accommodations.

Of course, not having a fallback plan means you won't be able to buy many, or any, scented candles made by companies called Trudon or Diptyque. But a good joke costs nothing. And I'm betting that Sedaris would be more than happy to lend you some pen and paper for your thank-you notes, if not write them for you.

To that end, below (in no particular order) are the best of the best—the commencement speech quotes that we think, if taken to heart and put into action, could have the power to alter your career, no matter if you're a soon-to-be grad, recent grad, or seasoned professional.

There's a sentence in Don DeLillo's new novel, Zero K, his 16th, that I've been thinking about nearly every hour since first coming across it last week. The sentence comes about one-fourth of the way into the book, and is a line spoken by a character who's co-created a sort of cryogenic chamber, a place where people die and then are preserved in death in hopes of being resurrected in the future when technology has advanced far enough so that human immortality is no longer a dream but a reality.